Does a snowfall mean more than that it is snowing?

A climate fearmonger called Jared Huffman (D-Calif) who is ironically employed as the U.S. Congressman has said some "audacious" things in the U.S. Parliament:


He tried to "remind" his colleagues that "a snowfall in December does not disprove climate change". 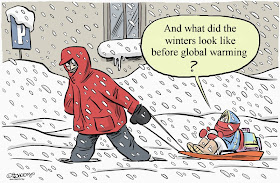 Well, the only problem is that it does.


I am not talking about the tautological climate change – the self-evident fact that the climate is changing and has been changing for 4.6 billion years, something that every sensible person is able to see. I am talking about the "climate change" that has been presented by some individuals as a problem. This one *is* disproved by the annual snowfall.


Just open the March 2000 article where the proponents of this "climate change" articulate the predictions of their theory for the snowfall:


Snowfalls are now just a thing of the past (The Independent)


The senior representatives of the Britain's key centers of the "climate change" belief system – the University of East Anglia and the Hadley Center – agreed that this "climate change" implies that the snowfall is a matter of the past, children wouldn't know what snow was, they would be emotionally debilitated (among dozens of other brutal consequences that they envisioned), and the frequency of snowfall will drop to 1 event in 20 years which would therefore cause lots of chaos every other decade. These are the predictions of the "climate change" and they have been proven wrong. It's as simple as that.

No significant trend in the snowfall on the Northern Hemisphere has existed since the 1960s.

So Mr Huffman's claim that the annual snowfall – an event that nothing whatsoever seems to be changing about – doesn't disprove the "climate change" is simply a lie. "Climate change" in this narrow sense – a hypothetical problem – has been defined as a collection of predicted phenomena in the near future and they have been falsified, so Mr Huffman's Republican colleagues are right to point out that the Emperor has no clothes. It's really their moral duty.

Mr Huffman's handwaving and chaotic chatter about drought in winter and tons of other things are different hypotheses than what the self-described "scientific consensus" has been calling "climate change" for many years. He should invent a new term for these new conspiracy theories – but new names notwithstanding, be sure that they're as invalid as the "mutations" of the dangerous climate change hypothesis that have already bitten the dust many years ago.

People like Mr Huffman are the deniers of the reality and their environment should make this indisputable fact very clear to them. They may try to mask their previous lies by emitting dozens of new lies and impress their dogs or the Huffington Post readers – but they can't impress intelligent listeners who remember what this crook and similar crooks have been predicting for decades and that well over 99% of this stuff has been proven to be completely wrong.
Luboš Motl v 6:58 PM
Share