Did you ever believe that the IPCC climate models have something to do with the reality? Were you ever tempted to think that the contemporary climatologists are able to write and publish anything if it helps their funding? 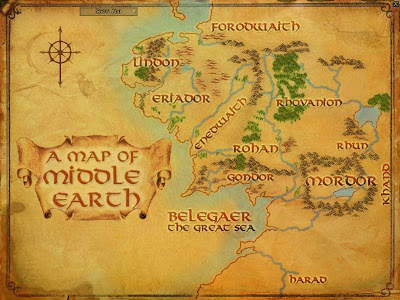 Researchers from the University of Bristol decided to settle the questions, once and for all. They used the climate models based on the same maths as used in the latest IPCC report and analyzed something that everyone knows to be damn real – the Middle Earth, a continent discovered by the explorer J.R. Tolkien.


The results of this important research led by Dr Radagast the Brown were originally published in two most important languages in the world:


Some of the readers are still using human languages – although the IPCC is working hard to reduce their number by several orders of magnitude. To help this soon-to-go-extinct race to understand the causes of its necessary decline, the article was also translated to human English.


It's as important and realistic research as all the research by the IPCC which is why the University of Bristol has also released a press release:


And the usual avalanche of the articles in the media written by the climate alarmist journalists has followed. Many of the journalists were intrigued by the fact that the home of the Hobbits (referred to as "the Shire" by the IPCC) looks just like Leicestershire or Lincolnshire. The press release more carefully explains that the focus of the IPCC models was on the vicinity of the home of the hobbit Bilbo Baggins.

On the other hand, Mordor, the land of the evil climate denier Sauron, resembles Texas or Southern California by its climate. You will have to read the full paper to learn what the IPCC has to say about the Misty Mountains and other places. All the forecasts for the Middle Earth were as carefully validated by a comparison with the empirical data as all the previous forecasts that the IPCC has published in the recent 25 years. However, this validation procedure has neglected all the "weather" and similar accidents that have nothing to do with global warming, for example the fact that in the Middle Earth (movie), there has only been 1 rainfall. The correct prediction of the IPCC models is 76 rainfalls per movie, proving that the movie is just a fluke or a denialist talking point. It's very important for the understanding of the global warming to believe the IPCC climate models rather than unreliable non-experts' tools such as your eyes.

This is actually based on the 1895 H.G. Wells' "The Time Machine" but you would be a denier if you were complaining about that.

The IPCC has added this simulation to its "holy trinity" of the most relevant and most realistic places they simulate by their state-of-the-art climate models – the Dinosaur Earth; the Middle Earth; and the IPCC Earth of the apocalyptic 21st century. The climatologists in Bristol wanted to make sure that there will be no deniers left; to doubt a dangerous climate change would be as foolish as to doubt the Hobbits. The video above shows that could happen to those who would be harboring similar doubts.
Luboš Motl v 8:42 AM
Share