Most events in North Korea are sad and the latest ones are no exception. 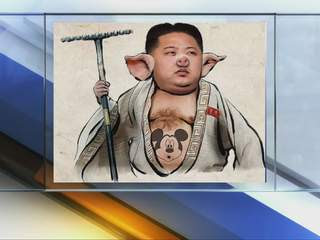 Kim 3 just executed his uncle (1946-2013). Well, the uncle was a husband of Kim 2's younger sister since 1972. They had a daughter (1977-2006) who went to Paris as an international student. Her parents didn't like her boyfriend so she first refused to return to her homeland in Hell and then she committed suicide, too.


Later, in 2011, Kim 2 died and his brother-in-law, the uncle, was pretty much the #1 man in the country. He probably helped the young spoiled brat Kim 3 to consolidate the power, too. It wasn't enough.


A few days ago, he was expelled from the Workers' Party. You don't want to be expelled because it's a sign you would be executed. So all his photos were retroactively removed from all the media and digitally removed from photos with other Korean leaders – left-wingers just love to rewrite the history (Stalin liked to edit the photographs, too) – and he was executed yesterday.

I don't know the "format" of the execution they picked but their traditional "firing squad" is most likely. But the reason for execution is "treachery" – some very vaguely described attempt to make a coup. It seems like nothing specific at all. The Wikipedia details some of its most inhuman crimes according to the verdict:
The recipe to survive is straightforward. Never be worse than a dog, even if your leader is a pig! Throw your leader's monument into a glowing furnace rather than a shadow corner. Never forget about your new leader when you're spreading nice pictures; he could be jealous. Clap super-enthusiastically and loudly (the sound of gunshots might be enough) when your young leader is being promoted for the 11th time.

More seriously, just try to appreciate how completely screwed-up the country must be if the items above are viewed as an appropriate justification to execute a man – the second most powerful man in the country, in fact.

But his death, while terrible, is just a tip of an iceberg. What I find much worse is the moral crippling of the whole semi-nation that unanimously endorses the execution. We can't expect any German-like reunification of the Korean peninsula. The citizens of North Korea seem unusable enough so that it will be preferred to place some of their remnants to small reservations and settle the peninsula by South Koreans only. The degree of degradation of the human race by the left-wingers in North Korea is just too severe and irreversible.
Luboš Motl v 7:57 AM
Share