I have been sure for decades that the biological differences between the male and female brains are significant and are the ultimate reason of the statistical differences in the interests, talents, and achievements of men and women. The evidence is formidable and growing.

Two days ago, PNAS revealed the online pre-publication version of a Pennsylvania-Princeton paper


Sex differences in the structural connectome of the human brain


by Ingalhalikar and 9 co-authors. The paper was discussed by all major media including the BBC, the Guardian, Fox News (video report where they spin the female specifics in a much more ludicrously positive direction than in the left-wing media), HuffPo, Forbes (on social implications), and many others.

Well, the female brain is good at "facilitating communication between analytical and intuitive processing modes" which may be just a euphemism for "it is less able to protect rational reasoning from emotions" (but if you want to spin everything female positively, be my guest: unlike the babe interviewed by Fox News, I don't think that any of these things supports the idea that politics should be done mainly by women but I may be wrong).


Well, they did scans of brains: 428 young male brains and 521 young female brains. The ages of their owners were between 8 and 22 years. The study used the "diffusion-based structural connectome" – they modeled the brains using diffusion tensor imaging. A statistical analysis of the connections was performed for each of the 949 young brains.

The scans made the differences clear (and I have trouble to imagine that those who did similar scans in the past have never noticed; the real novelty is that these authors dared to publish). There are developmental differences that increase with time. During adolescence, the differences become clear and they grow in adulthood. A few words about the character of the differences follow.

The cerebellar connections (which essentially means those in the infratentorial regions), the comparison is reversed.

One needs to know and think a little to figure out why the excess or deficits of certain kinds of connections implies the differences in the abilities that they associate with them. Note that the connections are far from capturing all the differences. Some time ago, we mentioned the fact that the male and female brains are dominated by gray and white matter, respectively. However, this observation may not be as independent from the differences in connections as it looks. 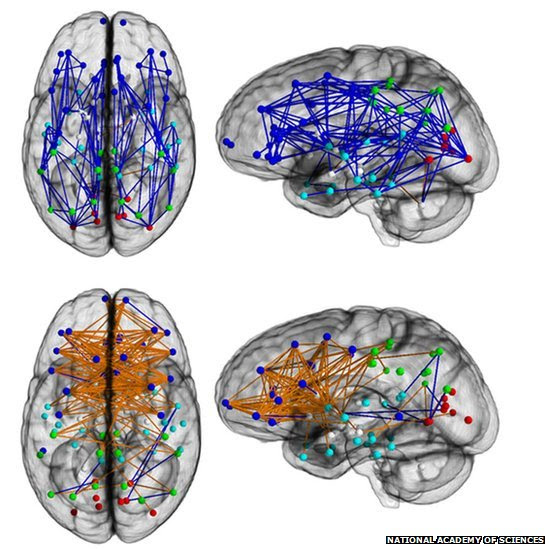 A clear difference between the blue (male) brain and the female (orange) one is that the blue brain is much more sharply separated to the hemispheres. But it ain't the only repeatably demonstrable difference.

Those are significant differences. It's like men grow into Windows PC desktop or laptop computers and women develop to Android tablets. Many things may be done by both, in one way or another, but the differences in the effectiveness etc. are guaranteed to exist. I mentioned the PC and the tablet because I can do certain productive things on the PC only; but it's only the tablet that I sometimes play with in the bed. ;-)

Now, 8 years later, I still feel extremely angry when I remember all the obnoxious whining feminist cranks at Harvard who were giving Larry Summers a hard time for a year – before they were the main ones who made him resign (if I ignore e.g. those arrogant lazy grade-inflating black rappers pretending to be professors) – just because he was ready to consider the possibility that the gender differences in STEM etc. have biological causes. As far as I can say, people who are ignorant – or claim to be ignorant – about the very fact that men and women biologically differ (even outside the sensitive areas) shouldn't work at prestigious universities at all. At Harvard and elsewhere, they not only work there but they're currently in charge of things and they deliberately and constantly harass everyone who is not as uneducated and unreasonable as they are.

One more catchy story on biology that excited me in recent days:

Darwin's evolution faced some opposition by the believers because it was undignified for the children of God to be related to apes. Do you think that they would find it easier to accept evolution today?

Well, think about it. Eugene McCarthy, a rather serious geneticist, claims that the humans' ultimate ancestors are a male pig and a female chimpanzee who had some fun.

Our hypothesized foreparents. Mahmoud Ahmadinejad is more similar to our foremother while Edward Measure resembles the forefather.

Look at the diet we share with our hypothetical forefather, the nice pink hair-free skin that distinguishes us from the apes and monkeys, and the behavior of many people. CommunistSocialistSwine who masks himself as CapitalistImperialistPig has still failed to hide his origin. Pigs' skin is pretty good for human transplants, a fact you might consider surprising or tantalizing. Somewhat unconvincingly for me, the evidence is largely anatomical and not DNA-based. (A factoid: humans have 46 chromosomes in total, in between 38 of pigs and 48 of chimps.)

So I don't even understand why the sexes of the ultimate parents couldn't have been reversed. Wouldn't it be more natural to say that women, who are really free of body hair, inherited this feature from our ultimate female ancestor, a pig, while men are more hairy after our forefather chimp? ;-)

Does this guy believe that the female chimp(s) and male pig(s) produced several or many children? At least one son and one daughter of this kind might have been needed for a further reproduction, right?