There are several interesting hep-ph papers today, especially those about supersymmetry, but I chose to highlight


LHC and dark matter phenomenology of the NUGHM

They work within NUGHM which is a rather generic MSSM with "non-universal gaugino and Higgs masses". This subset of the MSSM parameter space is much less constrained than e.g. CMSSM.


Most of the paper offers us various calculations and graphs of the most likely values of masses of dark matter particles (the lightest superpartner, the LSP) and its close cousins that are light enough.


This figure (Figure 2) is probably the most representative figure in the paper that encodes the main results. 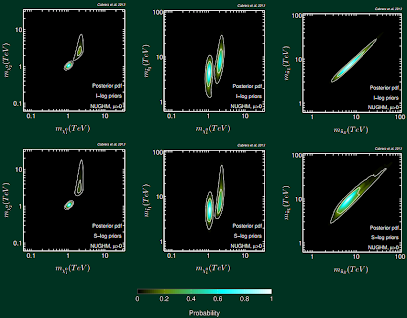 It shows the calculated 2D posterior probabilities for six different combinations of two masses. What can you see in the graph?

You may see that the "viable spots" are very small. Some people may spin this fact negatively (most of the a priori options are excluded!) – because they like to spin things negatively, especially things related to supersymmetry (or string theory). But the localization is really a good news. It shows that there are surviving regions in NUGHM and their smallness means that the resulting theory – NUGHM – is highly predictive.

The first graph among the six shows the masses of the lightest neutralino, the LSP \(\chi^0_1\), and the second lightest neutralino \(\chi^0_2\); they omit the tildes. The surviving place is composed of two very bright spots; the left one (lighter one) is sharper (more likely). These regions are said to agree with the reasons why "focus point supersymmetry" might be preferred, something that e.g. Nima would probably dislike.

Both spots, especially the lighter one, have the two masses almost equal to each other. This near-degeneracy is arguably incompatible with a bino admixture because there's just "one bino" that has no good reason to be degenerate with anyone else. It turns out that the left spot describes a nearly pure Higgsino LSP\[

\] while the second, right spot describes a nearly pure wino LSP with\[

\] where the second neutralino might be a bit larger, after all. The second picture shows that the lighter top squark is less sharply determined, between \(1\) and \(10\TeV\) in the lighter spot and \(2\) and \(30\TeV\) in the heavier spot.

The diagonal shape of the third picture means that the left-handed and right-handed up squarks are predicted to be nearly degenerate, with the shared mass between \(3\) and \(30\TeV\) or so. All the scalar superpartners etc. are arguably sent towards "dozens of teraelectronvolts" which may be a politically correct codeword for "de facto infinity". This situation of the heavy scalars differs from the predictions for the neutralinos – the calculations seem to boldly imply "their masses are lower than a finite upper bound".

The bottom row of the three pictures is really showing the same thing as their upper counterparts – but the calculations used different prior probability distributions. The two rows are sufficiently similar to one another so that one could argue that the dependence on the priors isn't too strong – which is good news.

These masses are relatively heavy and the LHC might have trouble to see this heavy electroweak superpartners although in the scenarios highlighted by this research, the electroweak superpartners would be the most accessible ones by the LHC. However, the authors say that the two spots could be visible by the next generation of the XENON (and LUX?) underground dark matter search experiments.

Note that XENON and LUX turned out to be the big "No" experiments – showing that all the "Yes" experiments must have seen some other overlooked background effect although no one exactly understands what these background effects are. However, LUX and XENON may give a "Yes" answer soon, too. It would be interesting news but we would still face the risk that they're just seeing their own, more refined phantom events that don't really display dark matter.

So even if and when these strongest underground experiments start to say "Yes", it may take some time for the dark matter case to be established as "Yes".

Off-topic: In five years or so, Amazon.com will deliver your order by a drone in less than 30 minutes if you're at most 10 miles from their warehouse; just be sure to click at the PrimeAir button. For orders exceeding $10, they will send the B2 Stealth Bomber with the U.S. secretary of defense on board, too. The B2 has advantages for people in apartment buildings – it will make it unnecessary to break your window for the package to get into your apartment. Instead, they may bombard and demolish the apartments above yours. The only barrier preventing Amazon.com from launching the service tonight is a stamp by the bureaucrats allowing them to bombard the buildings.

McDonald's will prepare flying robots that will deliver roasted pigeons directly to your mouth. Too bad, the closest translation of the Czech idiom "kingdom where roasted pigeons are flying to your mouth" to English is the mundane phrase "the land flowing with milk and honey" – quite boring and lacking the Czech degree of industrialization. ;-)
Luboš Motl v 12:39 PM
Share