In previous days, we in Central Europe have experienced near-freezing (0 °C, 32 °F) temperatures with a very small amount of snow. Things improved today: we enjoyed an almost sunny day with temperatures reaching almost 10 °C, 50 °F. Slightly more than 1/2 of the TRF readers are located in the U.S. (which I still consider the leader of the civilization, greetings). North America has suffered a weather that is almost a mirror image of what we have in Europe. 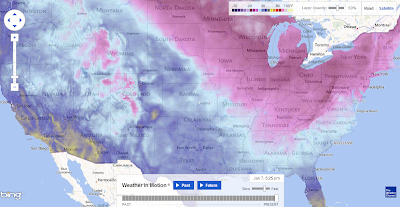 The purple color feels chilly; it is near 0 °F.

One may perhaps blame this asymmetric fate on the counterclockwise winds in the Northern Atlantic. It no longer looks like a vortex but it's clear that the winds are mostly coming from the South to Europe – but mostly from the North to the Northeast and Midwest of the U.S.

The current temperatures in Boston are slightly above 0 °F, i.e. –18 °C. The webcam looking at the Harvard physics department where I have worked for 6 years looks normal to me, however. Some places near the Great Lakes etc. are getting up to 70 inches, or 175 cm, of snow.


The polar bears in a Chicago zoo decided that the United States are too cold for them; the conditions would be even worse, by 0.0001 °C, if the U.S. had closed the economy as demanded by the climate radicals a few years ago. The bears have demanded some extra time inside and the managers of the zoo have surrendered the pressure from the polar bears' labor unions.


Incredibly enough, there still exist idiots who say that the cold weather in America is caused by "global warming". When I think of the polar bears who are kind of sensible, I am ashamed of being a human being – genetically speaking, a relatively close relative of the climate alarmists. I surely don't intend to debate these idiots but some of them are pushy and force you to debate them. But I believe that even skeptical websites are offering an increasing room to increasingly insane alarmist "theories" and I consider this trend counterproductive, to put it diplomatically.

The weather has been discussed by the higher society for centuries. English Gentlemen and many others have been starting their social conversations by comments about the weather for a very long time. We live in a highly advanced civilization whose numerous habits are however stupider than anything that people would be willing to participate in 300 years ago. The weather has been politicized and there exists a whole movement that likes to abuse the unpleasant weather, in one way or another, for pathological political goals – including tons of regulations, higher and new taxes, and even restrictions of the human freedoms including the freedom of speech. These people should be neutralized but the human civilization hasn't been courageous enough to remove these fraudsters and terrorists off the surface of the Earth which is why they keep on contaminating the public discourse by lies and ideologically motivated crap and threatening our freedom and prosperity. However, it's true that the belief in their crap is dying in this cold weather as quickly as the mosquitoes.

I wish the readers in North America to survive this weather. I am sure you will!

Stephen Hawking wrote an application for Apple devices that teaches you relativity, Snapshots of the Universe. Some people experience crashes and others will surely think that the realization is amateurish but look, it is Stephen Hawking's app! ;-)