Deer are constrained by the Iron Curtain

In Southwestern Bohemia and Northeaster Bavaria, you may find hills with deep forests that are known as the Bohemian Forest, Bavarian Forest, or Šumava [shoe-muh-vuh] in Czech. This national park has resisted human attempts to cultivate it but it is one of the canonical places in Czechia for skiing, too. See Google Maps, Mapy.CZ. A vast majority of the national parks is on the Czech side but the Germans still captured the highest peak, among other things.

When I was a kid, however, the hills were a major symbol of the Iron Curtain. An approximately two-mile band on the Czech side from the actual border between Czechoslovakia and West Germany was a forbidden area. We would be told that if we step behind a particular line, we would be shot, and these warnings weren't accurate but they weren't lies, either.

My dad's brother and his family emigrated to Nuremberg in 1980 (or 1981?). My father and – at different moments – my paternal grandmother managed to visit them a few times during the 1980s. Independently of that, my other uncle i.e. my mom's brother has lived in Melbourne, Australia since 1969. My mother was allowed to meet him in Munich once in 1980 or so; I (a fresh schoolkid) was invited as well but the comrades didn't allow me to go.


It would be almost impossible for other folks to get the antivisa (permission to leave the country). When the Iron Curtain was abolished sometime in 1990, everyone could see the stunning prosperity gap between Bavaria and Bohemia, lands that used to be extremely similar. The gap may be mostly attributed to communism although the expulsion of Germans – a brain drift – after the war didn't really help our side much, either.


At any rate, the Iron Curtain disappeared completely. You could even say that it has "overdisappeared". Sometimes it's difficult to realize you're crossing the border, an observation that maximally impressed me in Summer 2005 when we also had bikes and went to the top of Grosser Arber, a major peak on the German side.

Today, the Czech media have reported on a six-year-long project that observed the deer in this region. Šumava is one of the last places in civilized Europe whose forests are sufficiently untouched so that large animals still enjoy their life on this "green roof of Europe". Czech mountains in general experience a comeback of the wolves and bears, too. In Šumava, the deer and their key predators, the lynx, were given some GPS telemetric collars (around the necks), they were given names, and their motion was observed.

The results by Pavel Šustr et al. (is it the same Pavel Šustr whom I knew at Liane BBS?) were reported in this paper:


There are various interesting results. The does were more static than the deer; the males would walk and change their altitude a lot. In Bavaria, all the females were pretty lazy. However, the Czech females came in two groups: the lazy German-like ones and the emancipated Czech does that behave much like the males. The region occupied by a particular deer was nearly constant. About 15% of the deer, mostly males – led by the record holder Mr Radek – like to make long trips (20 km or 50 km over a longer timeframe). If I understand well, the main driver for these trips is the guys' desire to have sex. 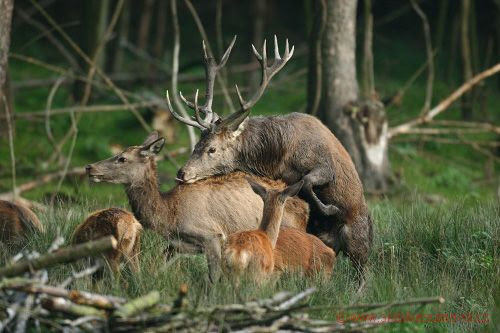 What seems as the most interesting observation is probably not quite independent from the previous sentence: the deer predominantly respected the iron curtain. The Czech deer wouldn't visit Bavaria and the German deer wouldn't visit Bohemia. One may invent lots of funny "explanations" of this observation. Perhaps, the deer still need the visas; perhaps, there exists a language barrier between the deer or some form of nationalism or racism among them. ;-)

More realistically, the deer were just taught how to behave and where to go by their parents – some of them were given electric shocks from the wires separating the two blocs – and they simply consider this parental education to be more important than it is for many humans. At any rate, someone should try to tell the deer that their knowledge is a bit outdated.

By the way, the Martians became really p*ssed off and began to throw stones against the Rover. Alternatively, Mars just doesn't have a sufficiently thick atmosphere that routinely burns jelly-doughnut-sized meteorites on the Earth, does it?

Exactly 30 years ago, on January 22nd, 1984, Apple introduced the Macintosh. Meanwhile, in my homeland, 1984 was relatively close to "1984". ;-) Czech viewers may check these January 1984 Czechoslovak TV news reporting on the future (getting ready) communist leader Miloš Jakeš's visit to Zlín, then "Gottwaldov", Baťa's town of shoes, which just celebrated the 35th anniversary of being renamed after the "excellent representative of the Czechoslovak communist movement as well as the international communist community" and our beloved counterpart of Joseph Stalin, Comrade Klement Gottwald. :-) My memories to 1984 are actually much more pleasant than that – e.g. the computer exhibition "Zenit[h] 84" where I was an exhibit on display.
Luboš Motl v 11:36 AM
Share