Italy was the homeland of Galileo Galilei, the father of science as we know it.

I have to remind you of this ironic fact because in the past, I've discussed several stories that painted a very different picture of Italy. Nuclear energy was banned in the country while seismologists were sentenced to 6 years in prison for their blasphemous inability to prophesy a particular earthquake.

Unfortunately, we are just witnessing another battle between Italy and science.


The cool young woman in the video at the top is Caterina Simonsen. She is 25. She has suffered from a quadruplet of rare enough pulmonary diseases. In 2009, she was diagnosed with a rare genetic disorder causing a shortage of alpha-1 antitrypsin, a protease inhibitor. This anomaly has harmful consequences for the liver and the lungs. She spends 3-6 hours a day with curing, including 7-9 aerosol exercises. Frequent hospitalization is a part of the package.


These difficult conditions – she was hospitalized again at the end of 2013 – haven't prevented her from lots of work on her degree in veterinary medicine. She is defending experiments with animals because she is convinced that without these parts of the medical research, she would have died as a small, nine-year-old girl; see The Sydney Morning Herald.

Some people aren't touched by her courage, achievements, and the clear implications of her life story so far. I am talking about a subgroup of the radical Luddites, the animal rights activists. Among other things, they have flooded her Facebook page with personal, hateful, and anti-scientific junk. The number of abusive messages was said to be 500; a whole cesspool of Woit-like subhuman junk. 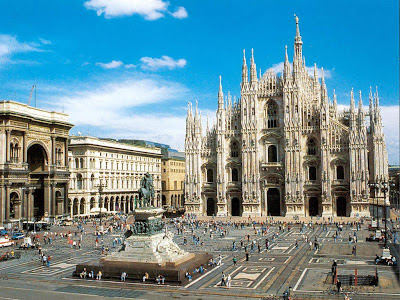 I have only been to Milan once. Nice. A pigeon sh*tted into my shorts from an impossible vertical angle. I decided that our Tyl Theater in Pilsen is prettier than La Scala.

The Science Magazine was one of the small number of English-speaking news outlets that have informed us that the campaign by the animal activists in Milan, Italy reached Nazi proportions this week. (I think that the official name of these activists, Nazi animalists, coined by Caterina Simonsen, is accurate. It's not just an analogy. Nazis' opinions about these matters were identical and they established the modern environmental movement. The policitian who has introduced the world's first nearly complete ban on medical experiments with animals was called Adolf Hitler. Sadly, the Jews didn't enjoy the animal rights.) Posters including physiologist Edgardo D'Angelo, parasitologist Claudio Genchi, pharmacologist Alberto Corsini, and Maura Francolini, a biologist were distributed in Milan. The researchers are called "murderers" and photos, home addresses, and telephone numbers of these researchers are used to encourage the Luddites' soulmates to "call these executioners and tell them what you think of them."

Don't get me wrong. I respect animals. And I love cats, including adult ones, and puppies etc. Adult dogs and horses are OK, and so on. ;-) I had trouble while killing a spider a few days ago. (It's silly that these remarks "have" to be added all the time: the battle in the Italian media is between vegans who love dogs and support the animal testing and sick people who would be helped by better medicine but who oppose animal testing.) And I surely do have problems with unnecessary death or torture of animals. But after my 7th birthday I understood that death is a part of the life cycle of animals including us. Equally importantly, by doing this kind of research, we are gaining the abilities to save many more lives – of humans and animals – that arguably compensate the sacrifices of the individual animals, martyrs of science.

Genchi, one of the targets, isn't "scared" but "feels uneasy" about the witch hunt. Some politicians have expressed sympathies with the researchers. So do I. And I encourage the animal activists to peacefully relocate to a jungle which is free of similar murders – and other signs of civilization; their staying in Italy proves their stunning hypocrisy and cowardliness. Europe hasn't been a jungle for many centuries or thousands of years and it's time to get used to this fact.

I admire Caterina Simonsen for her relentless struggle – combined with life and studies she can place on top of that – as well as for her refusal to be satisfied with a compromise with the anti-scientific scum. They say that her life is less valuable than 10 rats. Well, the opinions of rats and Nazi animalists don't count. Her life is more valuable than those of 1,000 Luddites – and unlike theirs, my order-of-magnitude estimate does count.
Luboš Motl v 6:35 PM
Share