I discussed this topic in April 2012 in


The SI system of units is based on 1 meter, 1 second, 1 kilogram, 1 kelvin, 1 ampere, 1 candela, and 1 mole. They have some definitions that are not really optimal yet. 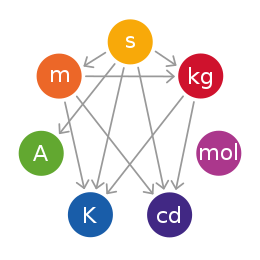 I claim that a theoretical physicist prefers units in which a maximum possible subset of the universal fundamental constants of Nature such as \(\hbar,c,\epsilon_0,e,k_B,N_A\) and perhaps even \(G\) have well-known values. In theory papers, we really want to put them equal to one but that requires one to use natural (e.g. Planck) units that are numerically different from what the people are used to.

If these constants are set equal to a precisely specified numerical value, it's equally good – up to some simple multiplication. For example, the speed of light \(c\) was set to a fixed constant, \(299,792,458\,{\rm m/s}\), in the early 1980s when the relative error in the measurement of \(c\) using the older definition improved to one part per billion, \(10^{-9}\), or so. Since that time, the accuracy with which times and distances are being measured has increased and due to the fixed value of \(c\), this progress is automatically reflected in the accuracy of times and distances, too.


A theorist focusing on gravity (or quantum gravity) would ideally want to fix the value of Newton's constant \(G\), too. However, this would be bad for another, experimental reason. In the current SI units, \(G\) is only measured with the relative uncertainty \(1.2\times 10^{-4}\) which is a huge error. You surely don't want all masses that people talk about carry this error of 0.01% caused by our inability to accurately measure the strength of gravity.

So it's not time to set \(G\) to a well-defined constant (in the real world; in theory papers, we're doing it all the time). By the way, if you primarily care about the real-world accuracy – about the need to avoid spurious extra unnecessary uncertainties introduced by impractical definitions of units – you should be interested in products of powers of the fundamental constants that are known more accurately (when it comes to the relative error) than the constants themselves.


On the other hand, some other constants have been measured much more accurately so there's no reason not to fix the appropriate constants equal to fixed numerical values.

Nature just published an article about some plans (that may be realized in 2018 so they are not imminent) to redefine one ampere:


Ampere to get rational redefinition


It's mostly based on the December 2013 preprint


which, if I understand it well, effectively wants to set \(e\), the elementary positive electric charge, equal to a fixed value in such a way that each lab could be equipped with a canonical gadget that measures the charge and other electric quantities accurately in the globally agreed units. The gadget is based on a single-electron pump.

There's nothing really wrong about setting \(e\) to a well-known value which is currently \(4\pi\times 10^{-7} \,{\rm (V\cdot s) / (A\cdot m)}\) which was chosen to agree with some 19th century semi-natural CGS (Gauss') units. After all, theory papers like to set \(e=1\) or something like that – which is not incompatible with setting \(\epsilon_0=\hbar=c=1\) as long as we insert the fine-structure constant to the appropriate formulae and laws of physics. It's not bad to fix \(e\) because its value is known with the standard uncertainty \(2\times 10^{-9}\) or so which is pretty accurate.

But I don't have anything against setting \(\mu_0=1/\epsilon_0 c^2\) to a fixed value, either. That's what the SI system is doing these days. So I don't really see any progress here. The fine-structure will have some uncertainty, anyway – currently it is about \(3\times 10^{-11}\) which means that it is known really accurately but it will never be known absolutely accurately (unless we derive its value from the right string vacuum).

As you can see, I am not too enthusiastic about switching from setting the vacuum permeability \(\mu_0\) to a well-defined value (the vacuum permittivity \(\epsilon_0\) is also fixed because \(c\) is fixed today). It seems much more important to me to get rid of the silly "international prototype kilogram", probably by fixing the value of \(\hbar\). The prepared reform of the definitions of the units is expected to redefine four units at the same moment – kilogram, mole, ampere, and kelvin. The apparent high influence of the experimental December 2013 papers suggests that good theorists aren't really well-represented in the metrological institutions.

To summarize my viewpoint, I would define the units so that \(c,\hbar,k_B,N_A,\mu_0\) are set to fixed numerical values and one second is linked to the atomic clocks (the currently used cesium is good enough). I am convinced that gadgets measuring and therefore "operationally defining" the quantities with the accuracy that wouldn't be worse than the current one could be designed and described as well. I feel that the fundamental units shouldn't be linked to some arbitrary systems used in measuring apparatuses unless it is really a superior choice – which is the case of the measurements of time via atomic clocks (and distances as well, thanks to the fixed value of \(c\)).
Luboš Motl v 12:35 PM
Share