Today, science writers were busy to write about the newest death of a pillar of modern physics, in this case Einstein's theory of relativity: Google News, Physics World, BBC, dozens of others...

Video by Anne M. Archibald, a PhD student and a co-author of the discovery

All this buzz is based on a newly published article,


which reports some observations of a star system called PSR J0337+1715. In the very abstract, they decide to "hire" this multiple star as a tester of the "strong equivalence principle" and the media copy (and usually amplify) this point.


I don't think it's a sensible way to talk about this cool system. In fact, I think it's unfortunate that such a cool "family of celestial bodies" gets abused for promotion of this kind of broken physics.


First, what is the system? It is composed of three stars. One of them is a pulsar i.e. a rotating neutron star. It is a millisecond pulsar and its presence makes this new system so special. The pulsar's mass is 1.438 solar masses (the relative errors are 0.01% or so for the masses).

This "Sun" has two lighter companions which are nevertheless much heavier than "planets". Both of them are white dwarfs (a remnant of a star composed of electron-degenerate matter). As the animation at the top shows, one of them is very close to the pulsar ("the Sun") and the orbital period is 1.6 days (much shorter than Mercury's). Its mass is 0.198 solar masses.

The other white dwarf is very far from the two bodies I have mentioned. Its orbital period is 327 days – pretty much the same one as the Earth's orbital period known as a year. And its mass 0.410 solar masses – much heavier than the Earth but it doesn't really matter.

The three-body problem is notoriously unsolvable even in the "simple" theory written down by Isaac Newton. The behavior is chaotic and cannot be expressed in terms of elementary functions (and not even in terms of not so elementary functions!). This causes more trouble than just complexity; soon or later, the chaotic relative motion of the three bodies is likely to lead to some collisions. 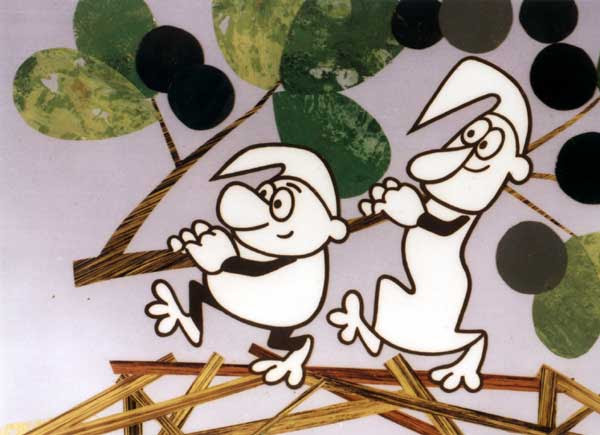 Křemílek and Vochomůrka, two ethnic Czech racially white dwarfs, were found at orbits around a pulsar. Check at least one episode of this cartoon!

Some more careful measurements of this very interesting system may confirm the general theory of relativity in a more nontrivial and newer way than other celestial systems that have been observed. This trinary star may also identify a deviation from general relativity. (Some media have already announced the falsification of GR; not so fast!)

But I find it highly unreasonable for them to guess that such a deviation would immediately imply the falsification of the "strong equivalence principle", a cornerstone underlying general relativity. First of all, let me use the term "equivalence principle" without the redundant adjective because operationally speaking, all the "versions" of the equivalence principle are really equivalent to each other. The authors of the paper in Nature are really "mostly" astronomers and by their addition of adjectives to the "equivalence principle", they only reveal one thing – their personal problems with general relativity. It reminds me of Lee Smolin's talk about "strong AdS/CFT conjectures" and similar bizarre linguistic constructs. (Incidentally, I was offered to translate Smolin's latest book, Time Reborn, to Czech today. I needed a few seconds to refuse the offer LOL. I've done some low-brow physical work in my life but to translate a book by an idiot who can't reach my ankles would be somewhat too much of modesty and masochism for me.)

The point is the following: Even if the trinary system detected some deviations from the predictions of general relativity, there would exist more sensible, more well-motivated, more natural explanations of the deviations from general relativity. General relativity could be modified in much more plausible, more likely, milder ways than by the liquidation of the equivalence principle that is beating in its heart. Their implicit claim that they may be close to the falsification of the equivalence principle is a silly wishful thinking. After all, the star system doesn't even test the principle "directly" in any sense because the three objects are located at different points and are therefore probing different gravitational fields, not the same field that could cause acceleration that depends on the composition.

Similarly, all the verbal exercises in the media designed to talk general relativity down are dumb, too. For example, we read in many sources that GR is incompatible with quantum mechanics which is supposed to make it more likely that they will detect violations of the equivalence principle. This is just plain idiotic. The observations of the orbits in this star system (and other systems of celestial bodies) have nothing whatever to do with quantum mechanics or its reconciliation with general relativity.

General relativity (and especially the equivalence principle underlying it) and quantum mechanics (and its postulates) are perfectly compatible as long as they are being unified in a careful and wise way rather than a naive or straightforward one. The full reconciliation of these two paradigms is known as string/M-theory but for many sufficiently "down to Earth" purposes, we don't really need too specific stringy features of our TOE. A semiclassical approximation is good enough. And the equivalence principle is one of the features of general relativity that make it possible to reconcile this Einstein's theory of gravity with quantum mechanics!

So these astronomers have contaminated their nice observations of this unusual system by their laypersons' misconceptions about modern physics – which is a bit unfortunate. And of course that much like in virtually all other situations, the stupid journalists have mindlessly repeated – and amplified – these misconceptions. But I am still happy that people will be able to observe this bizarre triple animal.
Luboš Motl v 7:19 PM
Share