Originally posted on 1/13. On 1/20, you may visit the nuclear power plant. Don't click at "i" buttons which make the facility explode.

There are 430 nuclear reactors but so far, there has been no comprehensive virtual tour into the nuclear power plants' interior. The dominant Czech power utility company ČEZ is changing that. For seven weeks, it will be presenting a new


virtual tour to one of its power plants (click, main web). 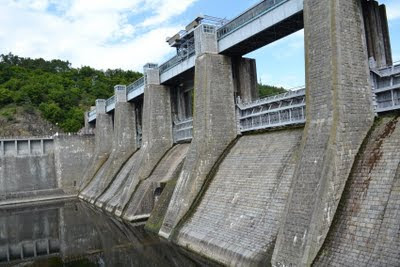 
On Monday, 10 a.m. Central European Winter Time, they release a new site. The first plant that became available today is the hydroplant in Štěchovice, a dam on the Moldau South of Prague. You may imagine that it is rather low-tech (the dam was built between 1938 and 1944 and completed in 1945 as the second part of the Moldau Cascade) but you should check what the website has to offer (and try to press all the buttons).

The much newer nuclear power plant in Temelín will be released next Monday and it's arguably the most interesting one. Sometimes in 2014 or early 2015, it should be decided whether Temelín will be expanded and whether the American-Japanese or Russian-Czech corporations will be hired to do the job. The semi-state-owned but publicly traded ČEZ seems to demand some minimum price guarantees from the government.


The schedule shows that when all the sites are released, you may compare the appearance and structure of six different technologies (coal appears twice):