Ariel Sharon died, RIP, the new (and optimal) Czech ambassador to Slovakia, Livia Klausová, is facing tons of vitriol from 95% of the Internet commenters – a screwed rabble – but I will talk about some potentially pleasant developments in the fusion research. (Some local good news: the babe MP who was the victim of a recent acid attack in Pilsen seems to be out of lethal danger. The tubes are gone, she can talk, and is interested in their puppy. Some extra good news: Google cooled its relations with an ex-German leader and freshly renamed Berlin's Adolf-Hitler-Platz to Theodor-Heuss-Platz.)

First, a political advance. Science Magazine mentions that the European grant agencies will no longer throw the money to the fusion research without any feedbacks. Instead, some of the sponsors have apparently realized that the construction of a working fusion reactor (before 2050) is a goal. The apparatchiks' brains must be really fast if they only needed 60-90 years for this realization. ;-)

The Z-machine (see the 8-minute intro video above) will be discussed below the following paragraph.

In unrelated news, MIT boasts that the 2010 MIT paper I-Mode: An H-Mode Energy Confinement Regime with L-Mode Particle Transport in Alcator C-Mod. by D.G. Whyte et al. (journal) has won a prize from the International Atomic [sic: should be Nuclear] Energy Agency. It's about an improved confinement technique, much like the story I want to focus on in the rest of this blog post.


The main story is about the Z-machine at the Sandia Labs in Albuquerque, New Mexico (see a 2006 TRF comment; don't confuse it with the NIF in Livermore) which managed to reduce the instabilities by a 19th century effect. See


The improvement is simple and was explicitly stated and calculated by Hermann von Helmholtz in 1873.


What is the Helmholtz coil?

Well, there is some magnetic field \(\vec B = (B,0,0)\) over there. But from the symmetry considerations, it follows that the odd \(x\)-derivatives vanish (the first one and the third one, for example). However, the second derivative \(\partial^2 B / \partial x^2\) doesn't vanish in general.

However, it may be calculated that for \(h=R\), when the side view of the coils looks like a 2-to-1 rectangle, we actually have\[

Finally now, in the 21st century, they also had the idea to forget about all the illogical and speculative excuses and realize this observation by von Helmholtz in practice. The experimental result showed that the magneto-Rayleigh-Taylor instabilities (which apparently thrive on inhomogeneities) were really suppressed dramatically: PRL. So the macroscopic derivatives of the magnetic field, and not just its random wiggles, matter. What a "surprise". 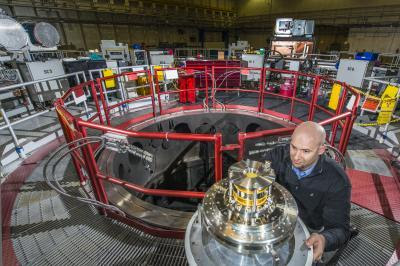 These folks may ask your humble correspondent to propose a geometry that will guarantee that the fourth derivative of \(B\) will vanish as well, and the sixth one, and so on, so that they may add another cute experimental publication (if not a working reactor) sometime in the 23rd century.

It's great that this progress has occurred but the apparent previous inability to suppress the most evident sources of inhomogeneities and instabilities – something that is obviously the greatest engineering obstacle decelerating the construction of fusion power plants – fills me with a worry that the people employed in this research are insufficiently competent or clever.

I saw The Last Mimzy (2007) for the first time. Brian Greene starred as a top Intel scientist. It was a cute sci-fi movie and $27 million in the box office surely looks undeservedly low to me.
Luboš Motl v 4:38 PM
Share