The Conversation published an essay by Dr David Blair, a LIGO member and especially the director of the Australian International Gravitational Research Centre [sic] at University of Western Australia,


Yes, you see that professionals such as Blair or Strominger or Silverstein have no trouble with the term "gravity waves" even though Germany's SS, a blogger (not to be confused with a paramilitary organization), urges you to be careful and not to mix up these gravitational waves with "gravity waves" which can "only" be waves on the boundary between liquids in a gravitational field.

Nevertheless, your humble correspondent will actually respect the recommendations by SS – not because I am afraid of anything. ;-) 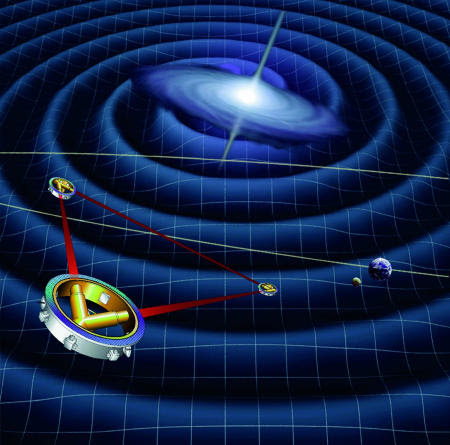 LISA and gravitational waves. Don't lose your sleep so far; the proposed launch is 2034 AD now.

Blair briefly reviews the history of GR and the nearly 100-year-long history of the gravitational wave detection, starting with the maverick physicist Joseph Weber in the 1960s. In the following decades, people realized that some quantum properties of the macroscopic rods had to be understood. They added cooling to low temperatures, lasers, phonons etc.

No gravitational waves have been detected so far – given the limited sensitivity of the existing detectors, this fact is compatible with the predictions of GR – but that should change very soon, we are told.


The reason for this expected progress is the aforementioned research center on a huge site at Gingin, just north of Perth, in Western Australia; Google Maps offers a dozen of pictures, too. If you want to see gravitational waves all over your living room, you may build your own Gingin at home.


This facility should be launched next year and by 2016 (optimists) or 2017 (pessimists), it should flood the journals with tons of data about gravitational waves. A signal should be detected every week, we are told, so we should be given not only a Yes/No answer to a question but a whole new picture of the Universe using the gravitational waves.

Well, it will be a little bit murky picture.

Some complications may arise and delay the whole thing by many years, super-pessimists suggest. I can imagine that they will start to detect something already in 2015 but there will be so many unclear sources at the beginning that for some time, people will have no clue what they are actually detecting – what is the source of the gravitational noise.

At any rate, Einstein could finally start to turn in his grave (by happiness), at least if the incoming gravitational waves near his grave will be circularly polarized. Well, there's one more problem with this optimistic expectation: Einstein has no grave.


Moon, off-topic: Much like the New York City, the Moon was also harmed by a huge collision visible by naked eyes on 9/11. However, the lunar one took place in 2013. Video, paper, Google News.

Unrelated news. I was intrigued by about 10 new HEP papers (8 hep-ph plus 2 hep-th) today. Recall that Tuesday regularly offers a higher number of papers than other days because it includes those submitted during the previous weekend.

CMSSM is said to be discovered or fully excluded at the VLHC but the \(33 \TeV\) and \(100\TeV\) proton-proton collider will be "almost sufficient". It's fun to see papers discussing physics at these huge, dreamed about accelerators.

Another paper claims that the \(125\GeV\) Higgs boson if explained with the Dirac gauginos requires some new or larger, previously overlooked fine-tuning due to the non-holomorphicity of some mass terms.

R-parity explained using \(B-L\) in grand unification is said to imply patterns in the decay of stops and sbottoms which should be correlated with the neutrino mass hierarchy. Some bounds on the stop and sbottom masses (around half a \(\TeV\)) are derived in this setup.

The recently suggested \(7\keV\) sterile neutrino dark matter (see Jester) is said to be more long-lived than expected. This indicates some extra structure in the seesaw sector, if seesaw is the right paradigm here and \(B-L\) is involved again, and this structure is used to determine various things including the gravitino mass near \(100\TeV\). Another reason for those super SSC colliders.

A paper discusses ILC, others (including direct, therefore "complementarity") detection of dark matter according to the p(henomenological)MSSM.

Universal extra dimensions are good at mimicking SUSY, another paper argues, but there are some differences in the events, UED disfavors mass degeneracy, and the data therefore exclude excited quarks and gluons below \(2\TeV\) or so.

Leonard Susskind discusses computational complexity in the context of the black hole information. He says that the formation of a firewall has a negligible probability during the star collapse – so far so good – but he believes it becomes common if "radiation is held in the box". I don't really believe it. Even though he claims to take ER-EPR into account, it seems to be equivalent to the usual errors about the firewalls. The transformation between the two horizons of the ER bridge is an insanely complicated one and for a generic arrangement on one side, one gets a nearly smooth horizon on the other side, I am convinced. It seems that he means that one may get anything after the recurrence time. Well, you can, but it is exponentially unlikely that you will pick the right moment when to look, so the firewall is still "hugely unlikely".

Another paper studies the unitarity of the BH evaporation and claims that the information is preserved due to some regularization near the singularity. I don't believe that it may play any role. It seems to me that the author claims that all the information comes in the final Planckian stage of the evaporation which seems implausible to me because it seems equivalent to tiny, unlimited-entropy black hole remnants which just don't seem to be in the spectrum.

Off-topic: Stephen Wolfram still uses English to give this 13-minute talk but the topic is the upcoming Wolfram Language. It's like Mathematica except that it can connect to and communicate with your head, genitals, and other organs; your fridge, your cellphone, and your other devices ever produced in all APIs and file formats ever designed (it has a model of the world and everything in it – including Radiohead – built in); Facebook and other servers and accounts; the rest of the Internet; and the rest of the Universe; and the Wolfram Cloud which may also run all the instructions you want. This largest and most coherent language in the world is also ideal for programmers who are still kindergarten students.
Luboš Motl v 7:52 AM
Share