Maoist comrade Barroso is celebrating another victory in his Blitzkrieg against freedom in Europe.

In 1977, a creamery in Liberec, North Bohemia began to produce the traditional butter spread known as "pomazánkové máslo" which became an instant hit with the Czechoslovak consumers (although the legend wouldn't ever spread abroad). Other dairies joined and began to produce it. The popular product survived the fall of communism, of course.

Let me mention that in the Czech language, "pomazánkové" is an adjective derived from the noun "pomazánka", a "spread"; "pomazánka" itself is derived from "pomazat", the verb "spread" (or "grease/lubricate [a surface of something, as indicated by the prefix "po-"; "maz" is the root for lubrication and related things; "-at" is just a widespread ending for an infinitive that gets totally changed when the verb is conjugated]).

"Máslo" is "butter", a solid-state milk product that melts at 33 °C or so and that is often spread on bakery products to lubricate them in the esophagus (have you heard this definition of a butter before). The Czech legislation has defined some standards for "pomazánkové máslo". It isn't really one of the no-fat substitutes. "Pomazánkové máslo" has to contain at least 31 percent of fats and 42 percent of dry matter and avoid vegetable fats. Of course, the Czech legislation was crafted sensitively not to damage products that "work" both for producers and consumers.


As you must have heard, the EU apparatchiks have designed their own definition of a banana, one that restricts the curvature invariants and size and that isn't passed by the would-be bananas from the Americas. The legislation about the Eurobananas became legendary.


But it's not just one anomaly. The EU is obsessed with this kind of regulation. In particular, it wants to impose their own definition of a "butter" on all the Europeans. A butter has to contain at least 80% of milk fat, they want us to believe. For a decade, this has been a subject of controversy between the EU and the Czech Republic. See e.g. this combative EU press release from 2010. 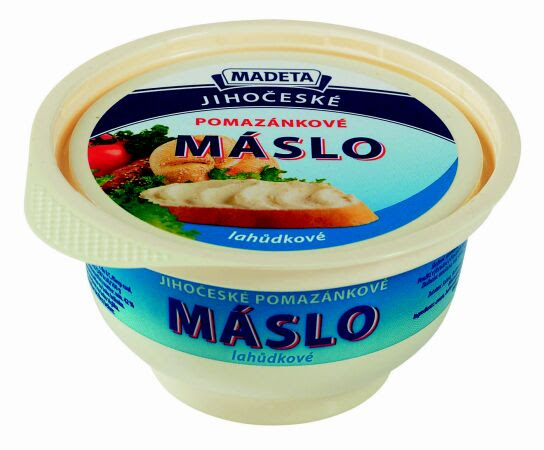 At any rate, in October 2012, a European court ordered Czechia to stop selling "butter spread" (along with our "marmelade") and Czechia agreed.

Today, they produced the last package of "pomazánkové máslo" anywhere in the country. Now it will be called "tradiční pomazánkové" ("traditional spread [one]" where the word for "spread" is still an adjective). Without Klaus at the Prague Castle, the Czechs are apparently ready to lick Barroso's buttocks if necessary (although, I must say, Klaus considers the butter spread naming dispute to be a non-event). The shortened name without "butter" is completely analogous to the "domestic [one]" for our "domestic rum". The EU has been trying to force Czechs to forget that they are drinking rum – while directly subsidizing our Carribean competition.

The butter spread producers hope that the controversy has been sufficiently publicized so that they won't lose too many buyers.

Quite generally, I am amazed by the apparatchiks' arrogance with which they believe to be able to improve the Czech language, something they don't have the slightest clue about. It's simply a fact of linguistics that numerous words in different languages don't "quite" correspond to their equivalents in other languages. A word AB in one language may mean CD but sometimes also EF in another language. Languages are evolving as a consensus among some speakers. The European Commission isn't composed of Czech speakers so they are not a party to this evolution of the Czech language. Or at least, they should not be.

Someone is concerned that "consumers could be misled" if a product with 31% of fat has the word "butter" in its name. The assumption here is that Czech consumers (who have been calling this product with the term containing "butter" for almost 40 years) are complete idiots; and that fat is the most wonderful part of our diet. Well, I am much more concerned about the word "European" in the term "European Commission". Some people could get confused and think that this group of people has something to do with Europe or European values.

What about renaming your band from the "European Commission" to a much more accurate "Soviet Planning Commission", comrade Barroso? A true European commission should contain at least 80% of members with a basic respect to the free markets and national sovereignty and at most 5% of the Maoists.
Luboš Motl v 8:18 AM
Share