Readers with 66 spare minutes are recommended to watch a colloquium that Juan Maldacena, an inaugural Milner Prize winner and the father of not only the AdS/CFT correspondence, gave at the New York University a week ago:

He's introduced and the sound quality improves immediately afterwards. In fact, it seems like the participants at NYU didn't enjoy the same quality as the YouTube viewers like you.


After some introduction to general relativity and quantum mechanics, Juan offered some jokes about the same criticism applied against the big bang theory as well as string theory.


He immediately jumps on the journey towards the quantum gravity topics – quantum field theory in curved spaces is an intermediate step. After five minutes or so, he already talks about the black hole temperature, including some fun numbers. A continental-mass sub-micron black hole will emit light at visible frequencies like a flashlight; so Juan's lightning technology is rather inefficient, not ready to replace LED lamps. ;-)

Someone interactively asks whether you may feel the temperature in the flat space, too. You can.

Inflation. Quantum fluctuations as WMAP non-uniformities. These inhomogeneities are scale-invariant. A clever way for Juan to discuss the importance of scale invariance at many places of condensed matter, statistical physics, and particle physics. The scale invariance is the important subgroup of the conformal invariance – one behind string theory's world sheets, AdS/CFT, and so on.

He asks whether the wave function of the Universe (as a function of the background metrics) may be equal to the partition sum of fields defined on the geometry. Strominger, Witten, Anninos, Hartman, Juan, and others are said to vote Yes while Dyson, Kleban, Susskind, Polyakov etc. vote No.

Juan refocuses on the hyperbolic or de Sitter space and explains the maximally symmetric spaces. 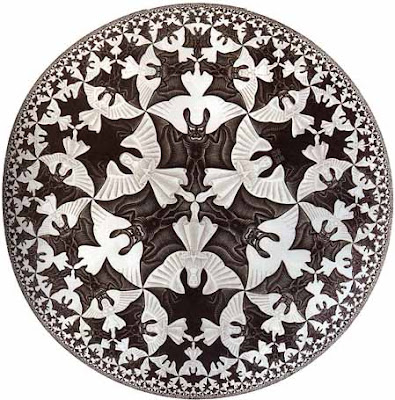 This picture of the hyperbolic space by Escher is mentioned often. If you don't know how it's called, what do you see in the picture? Answer before you continue reading.

The fun fact is that the picture contains two kinds of objects – black demons and white angels. The optimists only see the angels, the pessimists only see the demons. Where did you belong? ;-) Were you also stunned that you were overlooking 1/2 of this Escher world?

He sketches the behavior of scale-invariant theories and praises Georgi's "unparticle" terminology (something like aparticle with its position and size depending on the world line parameter; it may be automatically translated to a genuine particle in a higher-dimensional AdS space).

Has quantum gravity become cheap because every scale-invariant theory produces one via AdS/CFT? Juan answers just like I do (e.g. when a frustrated Steve Shenker once raised this "cheapness" bitter remark): Yes and No; it is "some" quantum gravity theory but it may be very strongly coupled, far from having a usable flat-space limit. A large number of fields is pretty much enough to make the bulk theory weakly coupled. You need \(10^{12}\) or \(10^{120}\) fields for the curvatures of the same order as in the early Universe or today, respectively. No accident that the numbers are the inverse cosmological constants in the Planck units. However, the coupling has to be strong as well for the three-graviton vertex in the bulk to be Einstein-like.

Juan is asked what he means by the boundary; he has never said that the AdS had any (conformal) boundary LOL, so he tries to fix this pedagogic flaw.

Someone asks a question how the bridge may be classical in GR as well as highly quantized. Well, it's the point of ER=EPR LOL. The connectedness of the two black holes is no feature of the dynamics, just a fact about their entanglement. Final theory not known; the connection between entanglement and geometrical connections is likely to matter.