I would recommend to scrap the policy of regular, semi-mandatory mammography screening

Overscreening, overdiagnosing, and overtreatment are three of the chronic diseases of the modern healthcare systems. The New York Times brought to our focus the results of an extensive, 25-year-long survey involving 90,000 Canadian women whose results just appeared in the British Medical Journal. 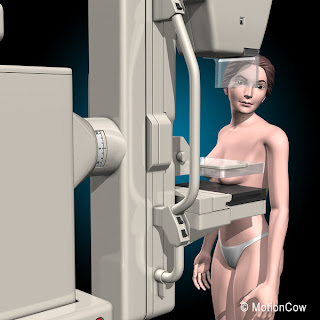 The results seem to clearly show that the use of mammograms doesn't reduce the breast cancer death rate. It is not the first study with a similar outcome – see e.g. this mammogram study one year ago – but it's arguably the most extensive, empirically rooted one.


During the quarter of a century, 3,250 women in the "with mammogram" group were diagnosed with breast cancer; the number was reduced to 3,133 women in the "without mammogram" group. The difference, 117, is almost exactly 2 standard deviations (two times the square root of 3,250) so one could say that with the mammograms, the detection rate is marginally higher – so that the difference may still be due to noise.

But what really matters is that 500 women (about 1%) died of breast cancer in the "with mammogram" group; the number of casualties in the "without mammograms" group is 505. Here, the standard deviation is the square root of 500 or so, or 22, and the difference is just 1/4 of a standard deviation. It is a pure noise, a statistical tie. The policy of random screening by mammograms hasn't detectably reduced the breast cancer death rate.

The paper mentions that this failure comes despite the fact that more women are dragged through the hassle of the cancer treatment – including surgery, chemotherapy, and radiation. The mammogram itself uses low-energy X-rays, too. It may be useful to know that mammography has a high, about 10% false negative rate (undetected cancer). The paper's data also imply some over-diagnosis (it's something else than a false positive; over-diagnosis counts cases of detected and real cancer but one that is "weak enough" and that would remain harmless enough for the rest of the life).

Now, there may be a signal. A more accurate measurement or survey could show that mammograms reduce the number of women by a small fraction of a percent. But even if it were the case, is an arbitrarily low reduction of the death rate a good justification for an expensive policy? I don't think so. The society is often held hostage to emotions and precautionary principle so that it becomes almost if not entirely politically incorrect to point out that someone (or a technology like mammogram) who is supposed to help isn't actually helping anything.

In the U.S., about 2.6 million people die every year. That includes about 1.3 million women. Out of them, 40,000 women see breast cancer as the cause of the death. That's about 3% of the women who die. The comparison of the numbers 505 and 500 above suggests that the mammography screening is unlikely to reduce the breast cancer death rate by much more than 1% relatively – I mean 1% from 3%. Even if you ignore the probable fact that the difference between 500 and 505 was just noise, mammograms are saving at most 400 women a year or so; it is 3 parts per million from the set of the women who die on the same year.

You may translate this figure to an expected increase of the life expectancy. That quantity is likely to increase by something comparable to 3 parts per million of its current value which is 80 years for women, too. If you multiply "3 parts per million" by "80 years", you will get something like "2 hours".

Even if you assumed that the observed difference in the death rates between the "with mammogram" and "without mammogram" group were due to a signal, the signal is so weak that an average woman prolongs her life by something like 2 hours only. It's less than what she spends with the mammography screenings in her life. It's actually much less because a majority of women are getting a mammogram every year. Let me articulate this point once again:


Is that a good investment of time then? And of course, it is not just time. A single mammogram costs something like $100 – that's what the uninsured women typically pay. If you get a mammogram annually for 30 years, it costs $3,000 per lifetime. Would you pay $3,000 for 2 hours of extra life that you would be obliged to spend in the hospital with annoying diagnostic devices (and possibly with much more annoying treatment)?

My answer would be a clear No. Just try to think how wonderfully you may improve your life for $3,000. And by the way, even if you added 2 hours for $3,000, the cost of your 80-year-long life would then be $1 billion. Try to inform your life insurance company.

Incidentally, the paper clarifies many subtle differences between various foggy claims that are being made. The refinements sometimes sound like black humor. For example, it is sometimes being said that women with breast cancer who undergo mammography live longer. It is true, in a sense, the paper confirms. However, what it means is that they live longer with cancer – more precisely, they live longer while knowing that they have cancer simply because they learn about it earlier. So their total lifetime is the same; just a higher fraction of their life is burdened by the disturbing knowledge.

I feel that the modern society is literally flooded with similar policies that were justified by pure emotions or the mindless precautionary principle. But if you think about them rationally, they are not bringing anything good to us. Mammograms look scientific but the assumption that their scientific basis automatically implies that they make a difference is believed as mindlessly as the belief in shamans in less advanced societies. Mammograms are just a tip of the Seiberg. Similar policies make people feel more anxious and add psychological problems in general, they are wasting their time, they cost something like $100 per mammogram - lots of money, they (I mean antibiotics that are overused) are making the bacteria more resistant and more dangerous in the future, and they bring virtually no improvement in the survival rate etc.

It seems to me that people think that "it must be possible to do something about the diseases" and "it's their duty to do so" and "it's the duty of others to morally support them in these policies". But it's a fact that even if you try hard and even if you use all the currently available technological know-how, you won't really reduce your risk of death to zero (or close to zero). Most of the people who were born are going to die on some day, anyway. Well, the truth is that all of them will but I didn't want to scare you by this revelation. If someone is eager to help (and be paid $100), it doesn't mean that he is really helping.

What I mean by the recommendation is that the providers of mammography and politicians shouldn't be allowed to claim that their method saves lives – or that it is a "must" for similar "reasons" – because this claim contradicts the evidence. Extensive, peer-reviewed, blah blah blah, scientific evidence.

CNN also wrote about some criticism targeting the study voiced by those who make living by mammography – billions of dollars per year industry. I find all the criticism to be indefensible malicious junk. Someone has done the most careful research involving 90,000 women for 25 years – and someone else may simply find the scientific results inconvenient. That's what's going on. The critics said that better-quality imagining devices and better professionals could have been used. Great but that would be biased. They have used the same kind of devices and professionals whom the typical women in the Western world get when they go to the annual mammography so any complaint is clearly indefensible. Moreover, if mammography were that helpful, it could be seen with the less-than-best devices, too. And despite the continuing improvements, the mammograms were in no way a "new technology" in the 1980s; mammography really began in 1895. Chances are that the death rate wouldn't drop even if everyone were undergoing the most advanced mammography. The critics also question the paper's comments on overdiagnosis. But they're very solid. In particular, it's very correct that the paper chose the actual number of casualties, and not "survival rate among the diagnosed ones", to be the quantity that matters. And there's no difference here. A higher (70% vs 63%) percentage of the "diagnosed ones" may survive in the mammography group but those 7% in the difference group would not be diagnosed and would not die (or face serious illness) if they didn't go to mammography. So this 7% group wasn't really helped in any way and it would be pure demagogy to count them as a victory for mammography. The defenders of the annual mammography have lots of vested interests – but those are among the holy cows whose motives and integrity cannot be questioned by the cowardly, hypocritical, PC media.

Australia's ABC quotes some oncologists who don't like that the study seems to imply that the very "finding the cancer early" doesn't reduce the mortality. And you know what? The study indeed seems to imply that – within their resolution. It's a dogma people want to believe that the early diagnosis is always great. But it isn't necessarily so. So minor/early stages of cancer may be present in random people. Many of them may be doing just fine with it for a century – the problem may never grow to proportions that matter. And those whose tumors are actually going to become dangerous, the early detection may be useless, too. Add the illness that may be added by the screening itself and by the unnecessary treatment and you must conclude that it's still totally plausible that the early detection makes things slightly worse, not better.

But again, even if the early detection does help in principle, we must still ask "how much it helps" and an actual empirical survey such as this one is extremely helpful if not necessary to answer the question. The answer seems to be "the help is negligible". Remarkably enough, Reuters only dedicates one paragraph (the last one) to the empirically unfounded criticism of the paper. On the contrary, KCCI offers a passionate testimony by Ms Mary Sievers who is convinced that she and her several relatives were saved by mammograms. Why is she so convinced that what the mammograms had found would have killed her? There's lots of religion-like faith in these matters.

Similar comments apply not only to healthcare; public safety is another example. A hurricane or any other natural catastrophe that destroys houses or human lives is terrible. People feel that they are "obliged" to fight against such catastrophes, at least by their way of talking or symbolically. But those things aren't really helping so any "feel good" feeling is utterly unjustifiable. You can't (detectably) reduce the hurricane rate by driving a Prius or not driving at all or by turning off the U.S. economy, for that matter. Hurricanes don't care about these matters and even if they do care, the dependence is so weak (similar to the reduction of the death rate with the help of mammograms) that it doesn't qualitatively change any particular story.
Luboš Motl v 9:10 AM
Share