Study finds a huge discrimination against boys at schools

Science shows that the opposite of the feminist claims is true 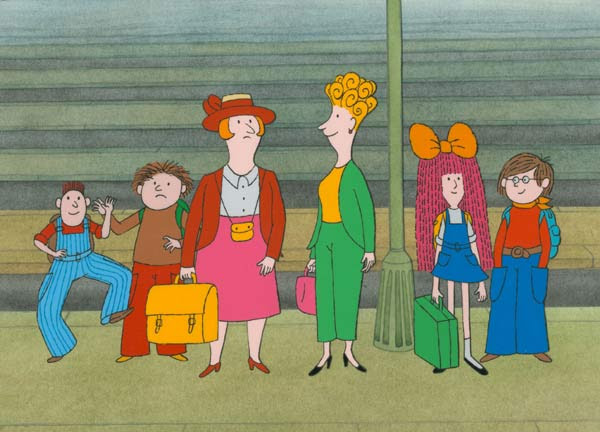 In the famous Czech cartoon for kids, Mr Mach and Ms Šebestová (right) found a torn off telephone receiver. Comrade teacher Ms Kadrnošková (pink skirt) tends to treat Mr Horáček and Mr Pažout as two ultimate losers although they may be smarter than Ms Šebestová and she just dislikes their rebellious character. Episodes at YouTube.

Czech news server iDNES.cz discusses a pair of new sociological papers about the favoritism in education:


Dr/Mr Petr Matějů, the currently most cited Czech sociologist and the dean of a Faculty of Social Studies, along with Dr/Ms Natalie Simonová, another sociologist (who is as pretty as her namesake with an extra diacritical sign, a model), wrote a paper to be printed in the March 2014 issue of Orbis Scholae (The Eye/Circle/World of Schools) titled


Who is disciminated against at school: boys or girls?


An extended international version written along with the Prague-based U.S. sociologist Michael L. Smith will appear in the upcoming issue of The British Journal of Sociology of Education.

Their research has analyzed the decade-old exams and grades from 2003 of 2,598 nineth-graders (*1987). The data included the reading and mathematical abilities in the international research tests PISA (where favoritism isn't possible), along with the grades from the normal school process where favoritism is possible. They were interested in various correlations of these numbers with the schookids' sex, socio-economic, cultural, and family background, and the kids' further plans.


Dr Matějů says that because of a growing avalanche of international research papers, he was ready to find out that the boys are discriminated against. But he didn't expect the differences to be so spectacular.


The favoritism aiding girls was found in every individual kind of test.

Even though boys' more objective PISA exams showed better scores than the girls' in all respects, girls are 2 times more likely to get a "1" in mathematics (an "A", from a 1-5 scale) than boys. In the Czech language, the chance of the girls' to get a "1" is a staggering 5 times higher than the boys' odds, despite the better boys' objective results.

The authors conclude that the discrimination against girls at schools is self-evidently a feminist myth. They have pointed out the absence of actual evidence in some other papers claiming to study the same questions, including one paper by Ms Lucie Jarkovská and Ms Kateřina Lišková called Gender Aspects of the Czech School Education System. The latter paper admitted that girls are the benefactors of favoritism when it comes to grades but it has also claimed – without any actual evidence – that the teachers like to question the girls' abilities.

Ms Jarkovská, the feminist, emitted lots of incomprehensible fog in order to try to diminish the impact of the new studies. "Unlike these authors, we don't view this as a fight – to find out who is worse off." It's too bad because exactly this "fight" question was claimed to be the topic of their very paper, too. Ms Jarkovská says that one must also judge the actual impact of the grades on the future success in education, the feeling of satisfaction, and later better income. Clearly, they haven't done any actual research on any of these things but they love to spread the answers supporting their preconceived ideology, anyway.

Drs Matějů and Simonová have found out that both sex and the social background of the schookid have a profound impact on the decisions about the further studies. The daughter of college-educated parents has many times higher chances to study a gymnasium (intellectuals' high school) followed by a college than the son of parents with apprenticeship.

"These biases have apparently been operating in our society for quite some time, and unless the situation will change, we may expect a further deterioration of the boys' ideas about the success in life – and this deterioration unavoidably evolves into the emergence of problem-riddled behavior, including violence and crime," Dr Matějů said. He would be a deputy minister of education for universities some years ago.

The reasons behind the favoritism is only discussed marginally by the paper. They speculate that a possible explanation is that the teachers give better grades to more disciplined, obedient, polite schoolkids – which tend to be girls.

Another possible explanation is the significant overrepresentation of women among teachers. If this turned out to be the actual cause, the society should work hard to increase the percentage of men among the teachers – in the analogous way in which it is sometimes being tried to increase the percentage of women in the STEM fields (well, I would add: it would actually be possible to increase the number of men among teachers while it is not possible to markedly increase the women in STEM fields). They also recommend various unspecified improvements of the education methods that would allow everyone to choose the specialization according to his or her interests rather than gender stereotypes.

They were asked how can the better girls' grades be reconciled with their lower average income. They answered that due to the discrimination against boys at schools, boys are forced to work harder which is something they later find helpful when they work. Well, I don't believe this explanation much, but let me not turn this news story into my essay.

Ms/Dr Jarkovská, the co-author of the older feminist study, mentioned many likely teachers' stereotypes. The assumption is that due to their later puberty, the boys are believed to be likely to catch up with the girls later. Teachers sometimes tend to prefer schoolkids who have been already "boxed" as the earners of the best grades "1". She also says that while the girls get many more "one's", their value is often devalued – teachers think that they resulted from memorization, not intellect and ingenuity. I actually think that these explanatory comments by the feminist are right (and so is the teachers' belief, in most cases). Teachers may give better grades to the girls but they also know it's happening, so they're largely remove this bias back when they see the grades (given by their colleague) as an input. 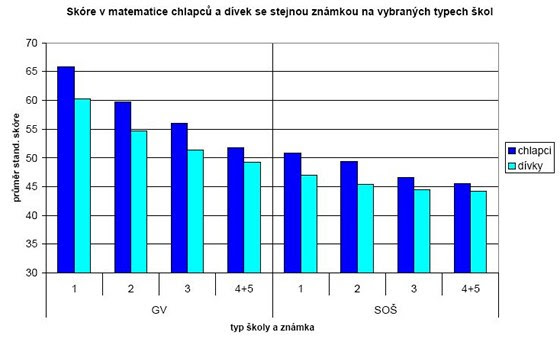 The x-axis shows the grade group (1 is best, 5 is worst), and gymnasiums (left half) and specialized expertise high schools (right half). The y-axis shows the average score of the sex-schooltype-grade bin for boys (dark blue) and girls (light blue). You may see that the boys' (impersonal) scores are always significantly higher. In fact, the boys' score would earn them a grade better by one whole degree (–1) if they were graded according to girls' standards.

Czech media have repeatedly discussed analogous conclusions of more "industrial" surveys of this kind. For example, in Spring 2012, we were told about 2005 tests by an institution named Scio that also showed that boys with the same grades had significantly higher scores in impersonal tests than girls who would receive the same grades from the (biased) teachers. See the graph above.

The discussion thread under the new newspaper article is highly civilized, partly because of the fact that virtually all readers seem to think that the papers confirm their experience which many of them describe in some detail. The votes under the comments sometime indicate the dominance of anti-feminist readers by the 60-1 or 30-0 ratio. It is still sort of staggering to remember that I was treated like a Nazi boss – or as a Jew in Auschwitz – for the very same common-sense views and knowledge. The only feminist-like assertion I could find in the discussion was one by a man that "girls probably need more motivation". A female reader quickly corrects the man by pointing out that the truth is exactly the opposite. It's the girls who are easier to be motivated – programmed to do something – while boys tend to preserve their own character and priorities and are sometimes notoriously hard to motivate.
Luboš Motl v 9:57 AM
Share