George Soros is arguably the world's most famous wealthy speculator. He has made most of his fortune by being malicious his whole life; and by being lucky in certain weeks. As a rich guy, he began to do a lot to harm the human society in the whole world. Instead of the term "a major sponsor of terrorist organizations in the whole world", some people often use the insane codeword "a philanthropist" to describe his activities.

I wouldn't count myself as a George Soros conspiracy theorist; the actions and influences that Soros and his hired guns are doing openly are enough for me to be alarmed.

He has paid certain organizations for their key contributions to many "revolutions" across the world, including those led by Saakashvili in Georgia and the 2004 Orange Revolution as well as the 2014 Messy Revolution in Ukraine. When it comes to what is now officially called the global warming Nazism, he may be paying for a majority of income of these "activists" that doesn't come directly from the governments' coffers. I still think that many of the believers and activists are genuinely believing all the insanities they are saying and they are acting weirdly for free (some "clever" guys, however, are getting money both from the governments and from Soros-like sources) but it seems hard for me to estimate whether this particular movement could exist if George Soros were never born.


In Ukraine of 2014, there were many honest and sensible enough people who were dissatisfied with the situation in Ukraine. (I say it despite the fact that I disagree with most of the political opinions of these people, too.) There is a lot of things in Ukraine to be dissatisfied about; and the amount of these things is unlikely to drop too dramatically and too quickly in the near future. The source of disagreement is how to improve things, however, and what may be considered an improvement. However, the most important sources of the "force" behind the protests were the mostly fascist parties and movements such as Svoboda and the Right Sector.


There were also many organizations on the ground, organizations that are euphemistically called the "NGOs". More accurate terms could be "terrorist organizations with large P.R. departments" or "private intelligence agencies connected to certain powerful interests". Top U.S. diplomat who cares about Ukraine, Victoria Nuland, revealed that the U.S. invested over $5 billion to destabilize the regime in Ukraine and to ignite the 2014 Messy Revolution. I think that this admission means that the U.S. government has been violating the rule 3 of the 1994 Budapest memorandum before others but let me not discuss these things here. By now, every major group has violated some laws in Ukraine.

This amount isn't including the contributions from George Soros. It may sound incredible but Soros' own contribution could have been comparable. His total wealth is $23 billion and between 1979 and 2011, he gave away $8 billion to various activities influencing politics etc. in the U.S. and in the world. Ukraine has probably represented a non-negligible fraction of this capital.

You could think that at the end of February 2014, days after almost 100 people (demonstrators and cops) died in Kiev, Soros must have been having twinges of conscience. But you would be wrong. On February 27th, Soros would write the following text:


This particular link points to The Guardian (where the article only received 67 comments so far which is pretty incredible, given the influence of George Soros) but the original version of the text may be found at the "Project Syndicate" along with translations to many languages including Czech.

What did he say? And didn't I promise you to talk about quantum mechanics, too?

First, let me begin with the portions of the text I don't want to discuss. He was claiming that his Renaissance Foundation operating in Ukraine since 1990 wasn't participating but it would become important now, after the victory of the "revolution". He complains that the influence of Germany in Ukraine hasn't been too good so far and that a better management of the Ukrainian economy will be achieved in analogy with the Marshall Plan when the European Bank for Reconstruction and Development (EBRD) will take the leadership.

These look like sort of innocent yet weird recommendations how to improve an economy. Note that EBRD recently refused to stop operating in Russia.

But I want to look at Soros' ideas about quantum mechanics and suicide bombers. His article begins with these propositions:


Following a crescendo of terrifying violence, the Ukrainian uprising has had a surprisingly positive outcome.


Well, the outcome doesn't certainly look positive to me so far.


Contrary to all rational expectations, a group of citizens armed with not much more than sticks and shields made of cardboard boxes and metal garbage-can lids overwhelmed a police force firing live ammunition.


They had just sticks. And also Molotov cocktails to burn the cops, to add a detail. And professionally trained snipers.


There were many casualties, but the citizens prevailed.


Only some citizens – although it is not clear to me why these particular people should be called "citizens" – temporarily and locally won some physical confrontations.


This was one of those historic moments that leave a lasting imprint on a society's collective memory.


When Shakhtar Donetsk played here in Pilsen on February 20th, the whole stadium would respect a minute of silence. So those were historic moments but pretty sad ones. Finally, Soros explains how this could happen. It's all about quantum mechanics:


How could such a thing happen? Werner Heisenberg's uncertainty principle in quantum mechanics offers a fitting metaphor. According to Heisenberg, subatomic phenomena can manifest themselves as particles or waves; similarly, human beings may alternate between behaving as individual particles or as components of a larger wave. In other words, the unpredictability of historical events like those in Ukraine has to do with an element of uncertainty in human identity.


The quantum mechanical particle-wave dualism may be identified with the individual-collective dualism of our identity, he is saying. When particles behave like waves, it's because they feel their membership in a collective. Except that this is exactly how quantum mechanics does not work. The wave phenomena (especially the interference pattern) occur in the double slit experiment not because of some interactions or cohesion or collective phenomena involving many particles. On the contrary, every individual particle has some wave-like properties. Every individual particle is associated with a wave – the wave function, a probability (amplitude) wave – which predicts the probabilities of various outcomes of any experiments. But you don't really need many particles of the same kind to test probabilistic predictions like that! And the interference pattern has surely nothing to do with the interactions of the particles with other particles which may be made de facto non-existent and the interference pattern is still there!


People's identity is made up of individual elements and elements of larger units to which they belong, and peoples' impact on reality depends on which elements dominate their behaviour. When civilians launched a suicidal attack on an armed force in Kiev on 20 February, their sense of representing "the nation" far outweighed their concern with their individual mortality. The result was to swing a deeply divided society from the verge of civil war to an unprecedented sense of unity.


I won't disagree that the ties to groups of other humans help to shape the identity of each person. On the other hand, the second sentence of the paragraph above is quite shocking: George Soros openly celebrates "suicide attackers". I can't believe that. It is so terrible. It's just wrong to use "suicidal attacks" (he uses this very term) to influence where the societies are going. Ukraine is less advanced than the traditional Western countries when it comes to the rule of law, the separation of wealth and politics, and so on, by you won't improve the situation if you "help" Ukraine to adopt the rules and standards of Al Qaeda.

The unequivocal support of George Soros for "suicidal attacks" makes me think that he could have hired the snipers who were shooting people on both sides himself. It's scary but it's compatible with all the data. The doctors and ammunition experts concluded that the dead cops and dead demonstrators were shot by the same snipers – with the same bullets and the same "handwriting" – and George Soros who is paying his own "NGOs" in Ukraine is openly celebrating "suicidal attacks" and the idea that these casualties have led to "positive outcomes". I don't have any rock-solid proofs for the most damning hypotheses but even the things that I explicitly see look pretty terrible to me.

The last sentence of the paragraph above is also stunning. Soros claims that the "suicidal attacks" have transformed a deeply divided Ukrainian society to one with an "unprecedented sense of unity". I can't believe he is serious; this is just so insane. The Ukrainian society has indeed been deeply divided – at least since the 1991 declaration of their independence but in reality, for 500+ previous years, too – but these divisions were kept in check by various people's moderate approach to the fragile equilibrium between the vastly different factions of the Ukrainian society, by their reticence, and indeed, by some official powers' efforts to calm down possible confrontations at the very beginning. What this 2014 Messy Revolution has unquestionably done was to polarize the Ukrainian society, to unleash and emphasize the hatred, and to make all the divisions far more visible and far more dangerous than ever before. 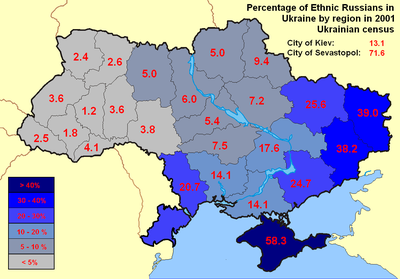 To talk about an "unprecedented sense of unity" in the situation we experienced two weeks ago (and we still mostly experience) that should have been described as an emerging civil (and not just civil) war – so far, thankfully, without much shooting – is beyond the pale. The people who don't really agree with the Maidan "winners" and "suicidal attackers" are still there in Ukraine – mostly (because a certain fraction of them has already emigrated to Russia). Parties with very different – and largely opposite – priorities than the Maidan had won the most recent democratic elections. Most of their backers don't feel any "sense of unity" with the Maidan-appointed government, surely not an "unprecedented" sense of unity. These "anti-Maidan" people clearly represent the majority of the society in Crimea but at least in Luhansk, Donetsk, and perhaps Kharkov (and the regions around these Eastern cities), the sentiments (and the outcomes of the confrontations) could be closer to those in Crimea than to those in Kiev. George Soros implicitly says that he doesn't want their opinions to matter at all. Maybe he is dreaming about a world where these people don't exist at all. They're probably not "citizens" for him. Only people paid by him or praising him and "suicide attackers" are citizens according to his definition of the word.

I am afraid that George Soros' ideas about the best ways to improve the society and to create a sense of unity are more shocking that his fundamental misunderstanding of the character of new phenomena in quantum mechanics.
Luboš Motl v 9:59 AM
Share