The missile defense system was promised not to be directed against Russia, Mr McCain

Senator John McCain claims that the ongoing reorganization of Crimea should be interpreted as a justification for the resuscitation of the U.S. missile defense system composed of a radar in Czechia and missiles in Poland. The plans were scrapped in September 2009. Perhaps, they were "postponed indefinitely" (or at least through 2015). So far, it didn't make any difference. 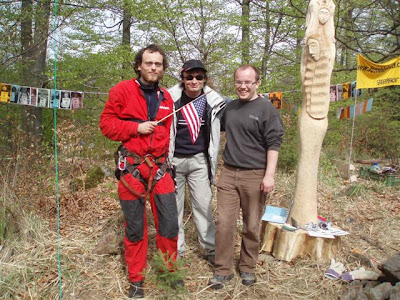 The planned radar site near Míšov, Brdy Hills (Břízkovec, "spot height 718", Google Maps) is located 30 kilometers from my home. As a clearcut defender of the project, I have visited the place about 15 times. At some moment, Greenpeace activists were living in the treetops over there. The landscape is beautiful there; the deep forests in the Brdy Hills were protected from the civilization because they have been a military space for many decades. Since 2015, the place will be open to the civilians (including the cowards who have avoided it so far) so the landscape may suffer a bit...

The picture above shows that I have forced one of them, the Czech Republic's Greenpeace Director for Climate Hysteria Mr Jan Rovenský, to wave the U.S. flag. He argued he wasn't anti-American and to a large extent, I think he's right. Months later, I would accidentally meet him in a radio program about the climate hysteria (as an opponent) and we fully realized that we were friends in the Summer 1988 camp in Sverdlovsk, our Soviet twin city. He would be more or less as anti-communist as I was which made it surprising to me that he would become a top apparatchik of Greenpeace (which he joined just 4 years after the summer camp).


But let me return to the main topic here. The missile defense system was marketed as a general defense facility for the U.S. in particular and the West in general – against unknown threats and perhaps Iran. It has been repeatedly and explicitly stated that the system was not directed against Russia. This has been said by many U.S. politicians and NATO officials. For example, as recently as in May 2012, top NATO official Alexander Vershbow would say the following in a talk.


The word "Russia" actually appears 45 times in the talk and it's interesting but just a few sentences:


At Lisbon a year and a half ago, NATO invited Russia to cooperate with us on missile defence, and Russia’s President agreed on this goal. Regrettably, progress on NATO-Russia cooperation has not matched progress within NATO.

Russia has sought reassurances that NATO's missile defence system will not undermine Russia’s strategic deterrent. We in NATO have taken Russia’s concerns seriously, and have discussed them in detail many times in the past year. We have welcomed every opportunity to explain why our missile defence system is not, and will not be, directed against Russia.

For the benefit of our discussion, let me just summarise why NATO’s missile defence is not a threat to Russia.

First, geography and science do not lie. Our system is aimed at protecting NATO and Europe from ballistic missile attacks from outside the Euro-Atlantic area, not Russia.


And so on. I may find very similar talks by other NATO officials and U.S. politicians. So it is very clear that a missile defense system that would be directed against Russia would be a different project, politically and technologically.

An unofficial anti-radar clip for a pro-radar song sung by Mr Jan Vyčítal and Ms Vlasta Parkanová, then the Czech defense minister. The punch line is that 3 external powers – U.S., Russia, and Al Qaeda – finally launch missiles against the poor farmer in the Brdy Hills. After the huge explosion, President Klaus would repeat his "I have never seen any destruction of our planet." The song itself is a parody of the 1961 official song Greetings to the Astronaut ("Good morning, Major Gagarin..."). BTW Gagarin would be 80 yesterday.

Even if the project were effective against Russia's capabilities, it would need a new approval by Czechia and Poland. Poland would probably agree even more than before because most of the Poles sufficiently hate Russia. It would be different in Czechia. I would personally oppose the project remarketed as an anti-Russian one, for many reasons. The first and most important reason is obviously that I am closer to the Russian government's attitudes to the Ukrainian events than to the U.S. government's attitudes.

Second, I do tend to think that the project originally designed to be against countries like Iran and North Korea wouldn't be helpful against Russia for technological reasons. Third, I think it is just silly to start to think such a defense facility at the moment when the tensions are already running high. It's just too late: America shouldn't have scrapped the project five years ago. Defense facilities like that are meant like a prevention, and when you're already feeling the heat, you need a cure, not prevention. Fourth, I just don't want my region to host a facility that is explicitly hostile to a country whose economy is responsible for 5% of our exports and 5% of our imports, if I ignore other types of ties (that surely exist, too).

Those five years ago (and more), I supported the project mostly as a tool to confirm and strengthen the American-Czech relationships – as a guarantee against some slightly hypothetical, remote, abstract, rare threats, not as a poison harming the relationships with an important enough nearby country on a daily basis. But I just don't want to restart the Cold War. I don't want a facility hostile to Russia to be 30 kilometers from my home. And yes, I would find it rather understandable if Russia decided to bomb the facility as a hostile facility that is too close to its borders – and I just don't want my region to go through a similar hassle (or even a risk of it).

The support and opposition to the radar project would be reorganized a bit if the purpose were redefined. Up to 2009, the opposition would include feminists, environmentalists, communists, and the local village people brainwashed largely by the old-fashioned communists. The rest of the society didn't care and would be OK with the radar even though the polls were showing a split nation if the respondents were asked simple Yes/No questions. But an anti-Russian radar would attract lots of new, pragmatic opposition.

For these reasons and others, Mr McCain, your plan to resuscitate the missile defense system is a bad idea.
Luboš Motl v 9:05 PM
Share