Dark Matter as a Trigger for Periodic Comet Impacts


As the "comments" (an entry in the arXiv form) point out, there are no dinosaurs in the paper so let me offer you a compensation. 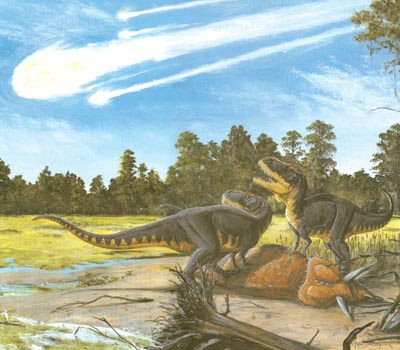 Holy crap, we forgot to install a thermonuclear missile shield above Chick-Ku-Klux-Club in the Yucatan Peninsula (65 megayears before Christ).

At least one of the authors has intensely thought about various extinctions etc. at the same moment when she or he was writing the paper ;-), so the "no dinosaurs" comment is much less off-topic than some people might think.

They take one thing for granted, namely a periodicity of 35 million years in the crater record on the Earth's surface. And they try to link it to a model involving the galactic midplane, a hypothetical dark disk in that plane, and tidal effects on the Oort cloud (a far "Ukraine" of the Solar System; just to be sure, if you happen to be brainwashed by the idea that Ukraine has no permanent link to Russia, "Ukraine" does mean "borderland" or "march" [of Rus'] in the Slavic languages, and even Ukrainian scholars agree with that).

At any rate, it is a new paper linking terrestrial traces (in this case, numbers of craters) with some celestial cycles (linked to the inner structure of our galaxy). So when it comes to the basic ideas, I do think that Shaviv-Veizer should be cited by Randall-Reece and it's a mistake that it is not.


The Characterization of the Gamma-Ray Signal from the Central Milky Way: A Compelling Case for Annihilating Dark Matter


by Daylan, Finkbeiner, Hooper, Linden, Portillo, Rodd, and Slatyer. A good popular story was printed in

One looks somewhere at the galactic center using the Fermi gamma-ray telescope. She sees tons of frequencies and tries to maximally accurately subtract the radiation from all the known sources (stars). Something is left, especially gamma rays with energies \(1\)-\(3\GeV\). The question is whether this excess is due to some exciting new physics (dark matter particle in this case) or some relatively mundane astrophysics ("millisecond pulsars" is currently the #1 favorite buzzwords of those who want to prefer this conservative explanation).

They drew the map of "where the excess is coming from" in some more detail, with a more careful geographic subtraction, and the result is that it started to look more like dark matter and less like millisecond pulsars etc. That's why Finkbeiner, a long-term skeptic when it comes to the dark matter interpretation of similar signals, joined the large list of authors (although he's still more skeptical than some co-authors).

The features supporting the dark-matter interpretation include the apparent spherical shape of the DM halo needed to explain that (although it could be elongated a priori); and the extension of the source up to 10° from the Galactic center (where no millisecond pulsars seem to be located) which still seems to agree with a distribution expected for dark matter (they assume a generalized NFW halo profile everywhere).

Even if the photons are created from dark matter by some annihilation, it is hard to determine what the dark matter particle is (and by which process it decays to the gamma rays and something else). Their favorite explanation is a dark matter WIMP particle in the \(31\)-\(40\GeV\) interval that decays to the \(b\bar b\) quark pair. I suppose that the two hadrons containing the bottom quark (or antiquark) then continue to decay so that the "few\(\GeV\) photons" appear among the final products of the decay.

If the dark-matter explanation is real, there is a chance – one could even call it a prediction – that the same excess should be seen in the dwarf galaxies orbiting our Milky Way. Jennifer Siegal-Gaskins of Fermi (and Caltech) leaks the opinion that the excess could indeed be there, too. Dan Hooper says that a confirmation of this rumor by a big excess would make this game over. Well, he seems to be convinced that DM is the only possible explanation already now. ;-) It's not surprising given the purely numerical statistical significance: it's a whopping 40 standard deviations, well enough above 5 sigma! But catches could still be there. The number "40 sigma" results from a comparison of \(\chi^2\) of fits with and without the dark matter halo (imprinted via their assumed decays).

Tracy Slatyer who is now at MIT faculty talks about her surprise that the new data would indeed sharpen the picture. Her preferred WIMP mass is \(35\GeV\). The particle is sometimes referred to as a "hooperon", not to be confused with a "hyperon", but "tracon" could be good, too. Juan Collar of CoGeNT etc. who would defend some "dark matter direct discovery" claims that no longer look too plausible now says that such a particle may be detected by similar underground experiments if the sensitivity increases 100-fold.

The rest of Wolchower's article is about the sterile-neutrino-like X-ray excess and the possibility that both excesses could actually be genuine, something that could actually be compatible e.g. with the eXciting dark matter models.
Luboš Motl v 10:16 AM
Share