Who should get the Nobel Prize for cosmic inflation? 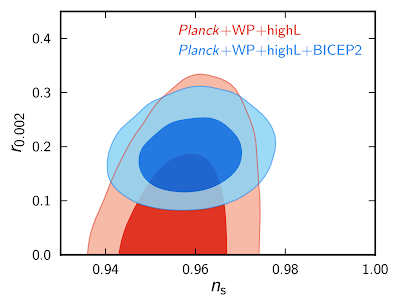 Graph added in the afternoon, LM.

Today at 4 pm British Summer Time we might hear some good news [and read some documents: already posted! \(r=0.2\) at 6-7 sigma; FAQ on the discovery] about a discovery of primordial gravitational waves and within a few more weeks that could be confirmed in more detail by Planck. If this happens the observational status of the theory of cosmic inflation will change dramatically because primordial gravitational waves have been described as a smoking gun for the theory. Well that may be an exaggeration but the observed scale invariance of the CMB anisotropy spectrum is already a good pointer towards inflation so could the combination be enough to sway the notoriously cautious Nobel committee towards awarding a prize for the theory? 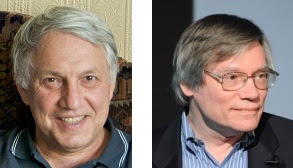 Rumors say that Alan Guth and Andrei Linde have been invited to tomorrow’s meeting where the team of astronomers who work with the BICEP2 observatory in Antartica will announce a “major discovery” about B-modes in the cosmic microwave background. E-mode polarisation in the cosmic radiation was produced at the time of last scattering when it decoupled from atomic gas in the early universe. These E-modes could then have been distorted by the tensor modes of the primordial gravitational waves permeating space, twisting the polarisation field of the microwave background into the (hopefully) observed B-modes. So the B-modes are a signature of the gravitational waves that are themselves a remnant of the much earlier inflationary epoch of the universe.


The presence of Guth and Linde at this meeting echos the presence of Higgs and Englert at the announcement of the discovery of the Higgs Boson in 2012, and that is probably no coincidence. Just as Higgs and Englert were awarded the Nobel Prize last year for the theory behind the Higgs discovery, Guth and Linde will be prime candidates for any Nobel Prize awarded for the theory of inflation. However, there was much discussion about who else might have deserved the Higgs prize and the similar decision for inflation could be equally awkward and controversial.


Guth and Linde have already been jointly awarded several honours for their work on inflation theory including the Gruber Prize and Milner’s Fundamental Physics Prize, but the Swedish committee places a higher bar for empirical verification. The general idea of the inflationary universe may pass with the new evidence giving Guth his ticket, but Linde has worked on more specific models of inflation such as slow-roll and chaotic inflation. Brilliant and important though his work is, I am not convinced that he is destined for the Nobel yet. Argue with me if you disagree. 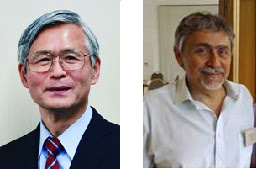 On the other hand Guth is not the only one with a claim to the original idea of inflation. It has been recorded that he first had the breakthrough idea on 6th December 1979, gave a seminar on the theory at SLAC on 23rd January 1980 and his paper was received on 11th August 1980. At around the same time Katsuhiko Sato in Japan had written a paper proposing inflation by 21st February 1980 which was received for publication on 9th September 1980, and another similar paper by Demosthenes Kazanas had already been received by 5th May 1980. All three contributions seem to have been independent and similar. The only thing that may have singled out the work of Guth was that his term “inflation” stuck and he was part of a more influential circuit of physicists. Closer examination of dates and the points they made in their papers may separate them, but I think it would be hard to be truly objective about what really counts. 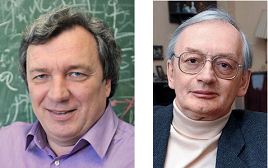 But then all three were preempted by Soviet physicist Alexei Starobinsky who had already worked out the ideas behind inflation in 1979. Wikipedia describes his contribution like this


“Although Alexei Starobinsky of the L.D. Landau Institute of Theoretical Physics in Moscow developed the first realistic inflation theory in 1979 he failed to articulate its relevance to modern cosmological problems. Due to political difficulties in the former Soviet Union, regarding the free exchange of scientific knowledge, most scientists outside the USSR remained ignorant about Starobinsky’s work until years later. Starobinsky’s model was relatively complicated, however, and said little about how the inflation process could start.”


I think this is an overly negative view of his contribution and I suspect that it owes more to a bias that tries to rationalize the fact that we do not recognize his work as well as we recognize Guth’s. It is notable that he had already predicted the primordial gravitational waves in 1979 before anyone else had even started thinking about inflation. How the Nobel committee will see it I can only guess. Starobinsky did also win the Gruber prize independently of the prize given earlier to Guth and Linde. He was recognised along with Viatcheslav Mukhanov who, in colaboration with Chibisov (deceased), first calculated the spectrum of anisotropies from quantum fluctuations during inflation and who could therefore be yet another candidate for the Nobel. Once again the Nobel committee will again be inflicted with the headache that strikes them when more than three people deserve their recognition for the same discovery.
Luboš Motl v 7:42 AM
Share