First, let me mention that the CERN accelerator complex is in the middle of the Two Years' Vacation which is the right moment to begin its reawakening. See LHC begins long road to restart at the Symmetry Magazine.

They first restart the source, then the smaller rings and boosters etc. – the chronology of the restart pretty much mimics the 6-minute video above that describes the CERN rings etc. culminating in the LHC itself. In one year, e.g. in April 2015, the collisions at 13 TeV should begin. Because of the quantitative leap in energy, all "null results" may be instantly forgotten and there will be a completely new chance – but not certainty – to detect previously undetected physical phenomena.

But I want to mention another article at the Symmetry Magazine that was posted in 2005.


The article is called Inflation and it contains the photographs of some of the first pages at which Alan Guth made the realization that allowed cosmic inflation to be born.


Now, Alan Guth won the "messiest office" contest but that didn't prevent him from storing the first inflationary notebook pages from December 1979! 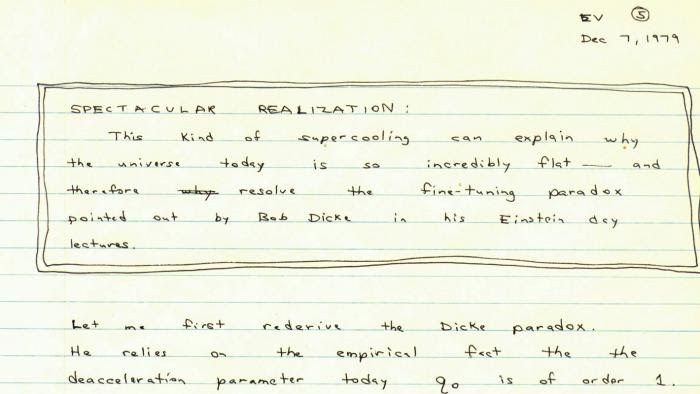 If you can't read it (the notebook is a part of the permanent exhibition at the Adler museum in Chicago), it says:

This kind of supercooling can explain why the universe today is so incredibly flat – and therefore resolve the fine-tuning paradox pointed out by Bob Dicke in his Einstein day lectures.

Let me first rederive the Dicke paradox. He relies on the empirical fact that the deacceleration parameter today \(q_0\) is of order 1.


Just to be sure, the Dicke paradox is the puzzling realization that \(\Omega=1\), the Universe seems to be flat without no good reason in the Big Bang cosmology. As far as I understand, the "supercooling" mechanism was just his original terminology for the old inflation – with a false vacuum state that ultimately tunnels into the true vacuum. Only weeks after these notes were written, Guth would hear about the horizon problem. But he would already be giving talks about "inflation" at the end of January 1980 (01/23/1980, three days after the first inauguration of Ronald Reagan).

Note that the inflationary expansion is a fancy example of "supercooling", i.e. so fast cooling without sufficiently good condensation nuclei that the liquid doesn't become solid during the cooling process. The temperature during inflation decreases 100,000 times (no, it is not the same googol-like huge numbers that describe the linear expansion of the space, but it is still large), from \(10^{27}\) to \(10^{22}\) kelvins. At the end of inflation, the temperature increases again – it's the "reheating" when the seeds of matter that later turns to galaxies and us is born out of the kinetic energy of the inflaton field. 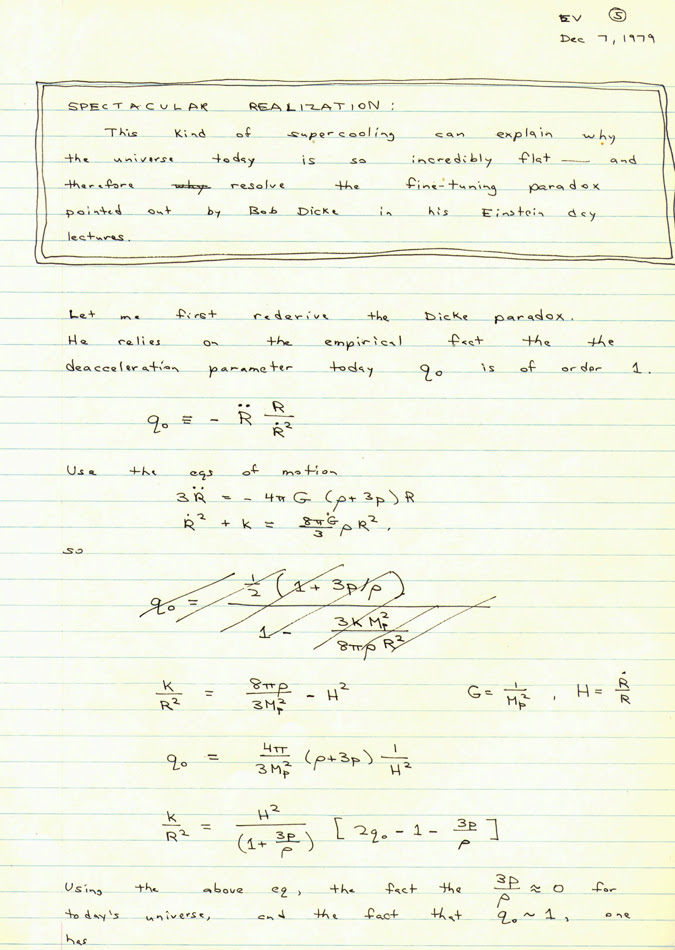 A continuation of the page above. Click to zoom in.

"So, after a few of the most productive hours I had ever spent at my desk, I had learned something remarkable. Would the supercooled phase transition affect the expansion rate of the universe? By 1:00 a.m. I knew the answer: Yes, more than I could have ever imagined."