Exactly one month ago, I wrote about two dark matter stories: the proposal by Randall and Reece to link extinctions to dark matter; and some unusually strong (formally 40-sigma) signals supporting the existence of the hooperon, a WIMP dark matter particle candidate with mass between \(30\) and \(40\GeV\). (See Jester's classification of the tantalizing dark matter particle clues.) 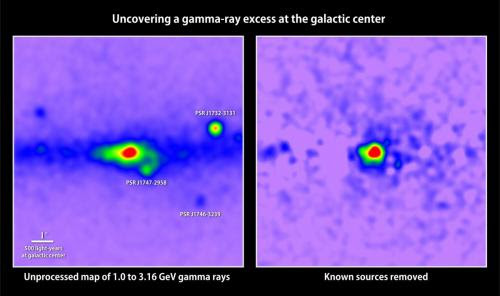 Some sources of the gamma rays seem to clearly shine near the Galactic center (but almost 5,000 light years from the center) even if the known sources are removed.

Lisa Grossman of Nude Socialist (and Phys.ORG, among others) has summarized the story with a one-month hindsight now:


Just to be sure, there is this signal near the Central Milky Way whose statistical significance is a staggering 40 standard deviations. However, this significance is useless if there is an alternative, so far overlooked explanation of the bright spot that is able to emulate the annihilating dark matter particle. This bright spot is discussed in the previously mentioned (at this blog) February 2014 paper by Hooper and 6 co-authors.


Hooper and two other co-authors have released a new paper a few days ago,


which is a survey of existing models that could be compatible with the signal. The second condition is that they don't conflict with the null results at the LHC which has tried to find the dark matter particle but it has found nothing so far. These seemingly "approximately" contradictory conditions turn out to be satisfied by numerous models in the literature, some of which also obey the third condition, the right thermal relic abundance (how many these particles are left if they are created thermally and then partly decay according to the rules prescribed by the theory).


Rather soon, we may see an official paper by the Fermi (telescope) collaboration that is, according to previous rumors leaked by Jennifer Siegal-Gaskins, seeing the same signal in 25 dwarf galaxies. Simona Murgia of Irvine (and Fermi) tried to mask all the previous rumors but her body language has betrayed her. When you look at her when she's saying that other teams (such as "her" Fermi) are extremely important in deciding whether the signal is real and caused by dark matter, you may see in between the lines that they are seeing it, too. ;-)

The analogous October 2013 paper by Fermi (PRD) saw no excess. 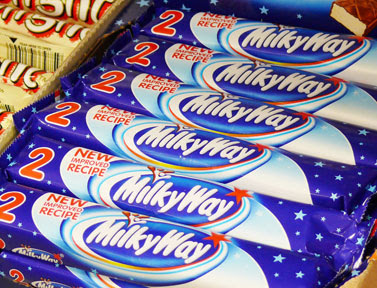 In some sense, the observations of the excesses in other galaxies would be even "more independent" confirmations that there is something dark (chocolate?) inside the Milky Way and its cousins.

Hooper also reminds us that the direct dark matter search experiments, especially LUX, are not out of business yet. With more data, the probability is about 50% that LUX will discover the hooperon in early 2015. That would be really fascinating; this event may refuse to occur, too. Similar chances exist for the discovery during the LHC \(14\TeV\) run that will start in one year, too. Given the importance of Hooper of Fermilab and the Fermi telescope, let's hope that the hooperon will turn out to be a fermion. Most models of the WIMP do assume that it is a fermion.

If the existing hints will be explained by some mundane physics, the hooperon will have to be renamed to Whoops-Enron and we will have to jettison this excess baggage in order to make progress, as Murray Gell-Mann said in the Enron ad. :-)
Luboš Motl v 8:43 AM
Share