Europe is a very diverse continent and it is a bit confusing to combine the seats from all the countries. But some of the "projections" of the vector of results look better than expected.

You know, some decade ago, I would also be influenced by much of the "mainstream" thinking and I would consider France's National Front to be a rather extreme party. And maybe it was. I surely don't consider it extreme today and it probably isn't. ;-) Ms Le Pen got 26%, ahead of center-right UMP with 21%. Hollande's socialists only got 14%.

Even more impressively, UKIP won the EU polls in the U.K., with 29%, beating Labour at 23% and Tories at 23%. Greens better than LibDems.


A fun fact from Spain: I was surprised by the numerous Spanish visits to the article Shut up and calculate, especially if you're a lousy thinker. Miguel M. kindly explained me the reason of the visits: the noted wheelchair-bound anti-quantum warrior Pablo Echenique-Robba who is the main villain of that blog post got elected (unless the remote votes change the results dramatically which is unlikely) to the European Parliament for the scholars' extreme left-wing but Euroskeptical party called Podemos (this name is used across Latin America, too). Congratulations and I wish good luck to the... scientist... to finally achieve the destruction of the European economy, the European Union, and modern physics. ;-)


In Italy, center-left current PM Renzi won 40% which is in no way against the bad EU trends but on the other hand, I have no problems with that because I feel he makes Italy controllable. Comedian Beppe Grillo's maverick Five Star party got 22% and Berlusconi's party received 16%. In different countries, I may have different sympathies, and this collection of numbers looks good to me, too.


In Germany, Merkel's CDU/CSU got 36% ahead of SPD at 27%. Alliance für Deutschland which is against the euro currency got 7% which is in no way victorious but it's still a nice surprise. I am not super-excited about the results of our key Western neighbor – it's pretty much the same we would see for decades – but Germany is a well working country in my eyes which is why I would find big revolutions dangerous.


Greece is still a mess, although a less terrible one than a few years ago. They even scored a budget surplus last year! Hypercommunist scum at Syriza won 26% which is terrible. But at least Antonis Samaras won 23%. Golden Dawn fascists stand at 9% which is lower than expected and therefore calming.

The record holder of low turnout is Czechoslovakia. The turnout in Czechia was a record low, 18%, which would render elections in various contexts illegitimate but which was still much better than what the turnout looked like on Friday afternoon. But Czechia was beaten by one other country: our Slovak brothers' turnout was 13%. Wow. ;-) 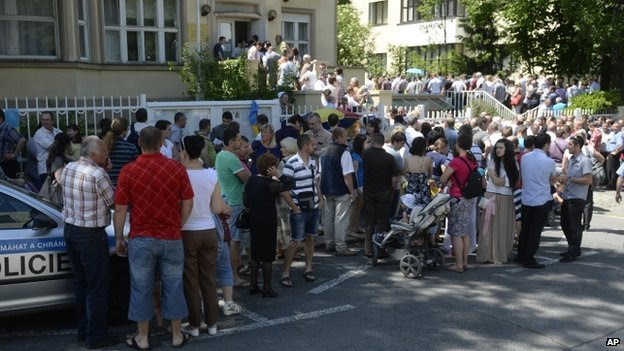 Voting queues in Prague. The only catch is that it's not Czechs. It's Ukrainians who have elected a Chocolate CEO Poroshenko as the president. (I decided not to use the word "oligarch" because I think it's a demagogic stereotype to attach disparaging labels to all wealthy men in the post-Soviet realm. He may very well be the same kind of an entrepreneur as some rich men in the West.) This result is likely to calm the atmosphere in Ukraine because he seems much less hostile to their ethnic Russian population (and to Russia as a foreign country) than the current de facto fascist de facto government.

In Czechia, centrist populist billionaire Babiš (ANO) – the new star of our "mainstream" politics – won with 16%, matched by center-right TOP at 16%. Social democrats have 14%, communists 11% (much lower than expected, I could even imagine that they would win), Christian Democrats at 10%, ODS at (much lower than historical) 7.7%, and: Party of Free Citizens at 5.2%. This is cool because I voted for the letter and the chairman, Petr Mach, indeed managed to win a seat! (Czechia has 21 seats in total.) It was the first time I voted for a smaller party near the threshold but it managed to be the best investment of the voting power in my life. If there were approximately just 2,500 Mach voters fewer, he wouldn't get there, if I calculate well.

In Slovakia, Fico's social democratic Smer ("The Direction") clearly won with 24% but it was still lower than the majority some people were expecting. Christian Democrats at 13% and 6 parties between 5.8% and 8%. What a fragmentation. They include Richard Sulík's libertarian anti-EU-regulation Freedom and Justice Party. He would be #3 at his party's ballot (for reasons I don't know) but the preferential markers (whatever is the English term for that) got him to the top and to Strasbourg.

Mach, Sulík, lots of UKIP and National Front deputies in the EU Parliament may bring an atmosphere to Strasbourg that will be less annoyingly Soviet-like than the atmosphere in recent years.

See also BBC numbers from all countries and BBC's story about our low turnout
Luboš Motl v 6:07 AM
Share