Off-topic: A week ago, The Big Bang Theory and three less important shows were banned in China where they were streamed legally and where TBBT became hugely popular. No one knows why – Chuck Lorre has speculated what the gang of commies in a dark room who have watched a few TBBT episodes didn't like. Maybe it's because Penny has "soup" written on her buttocks in Chinese characters and Mary Cooper uses the term "Kung fu letters" for these East Asian scripts. ;-) But the reason could have been more political, of course. Or commercial.


Why the hole is hyperbolic and why you shouldn't worry

The following simple video from a Valencia, Spain science museum has gotten almost 200,000 views in a few days.

Not bad. I believe that many readers, including very young ones, are not only able to reconcile themselves with the fact that the hole may be curved even though the rod is straight but they could even compute the shape of the rod. But let me say a few words, anyway.

Some of us intuitively believe that a straight rod should produce images composed of straight lines. But it isn't necessarily so. After all, many of us have already tried to use a straight rod named "a pencil" to draw circles and other undoubtedly curved curves. ;-)


The point one shouldn't overlook is that the path of the straight rod in the spacetime doesn't have to be straight. If the individual points on the rod are accelerating i.e. if they are moving by any other velocities than constant velocities in the same direction, the resulting "history" that these rods define in the spacetime may be curved.

And the hole in the glass is nothing else than a particular intersection of this – curved – history (the worldsheet of the rod) with a 2-dimensional plane in space (extended in an additional 1 time coordinate, too). What is the shape of this intersection?


There is an interesting curved shape that may be created out of straight lines.

It's the Ještěd [yesh-tyet] Tower near Liberec, North Bohemia, that serves as a hotel and a TV transmitter tower. It's often said that the tower has the shape of a "hyperboloid" but it isn't really so. It's "similar" to the hyperboloid in the sense that the surface is negatively curved. If you move along the circles encircling the (vertical) axis of the rotational symmetry, it looks like the shape is convex. But if you move along the surface in the nearly vertical direction, it seems to be curved in the opposite direction, like a concave shape. This property, that the shape is convex vs concave in two orthogonal directions (also the case near \((x,y)=(0,0)\) for \(z=x^2-y^2\)), is what makes the curvature negative.

But the precise shape isn't a hyperboloid. Visually, you may see that the hyperboloid of one sheet – which is the only sensible candidate here – never gets as thin as the TV tower gets at the top. So all Czechs are being duped when they're told that the TV tower is a "rotational hyperboloid". But they're being duped all the time by more important things as well, so it's not a big deal. :-)

\] where the sign \(+1\) is chosen for "one sheet" and \(-1\) is picked for "two sheets". We will only talk about the hyperboloids of one sheet. Note that it's easy to see which equation corresponds to which hyperboloid. Use the equation to calculate \(z\) as a function of \(x\) and \(y\). You get\[

\] If you choose the upper sign in front of one (for the hyperboloid of one sheet, in the case of this equation, it is the negative sign), the argument of the square root will be negative for too small values of \(x,y\), namely those inside the ellipse\[

\] so you will get no real solutions. For \(x,y\) outside the ellipse, we get two real values of \(z\) but these two branches are merged at the only root \(z=0\) which is calculated for \(x,y\) belonging to the ellipse. So there is only one sheet; the two possible signs of \(z\) are being connected somewhere (at the ellipse in the \(z=0\) plane). If you choose the opposite sign in front of one, the argument of the square root is always positive (equal to or greater than one) so there is no "vertical line" avoiding the surface (no hole in the top view) and there are two possible values of \(z\) equal to plus or minus the square root and these "two sheets" meet nowhere. 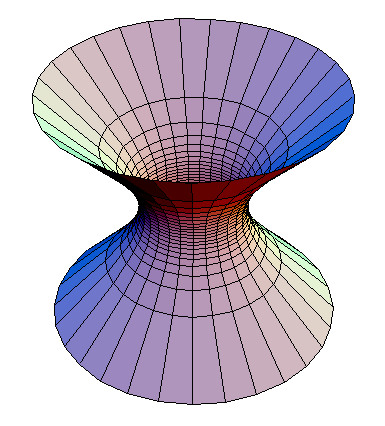 A hyperboloid of one sheet

However, the hyperboloid of one sheet is a doubly ruled surface which means that through each point, you may find a straight line that fully lies inside the surface. 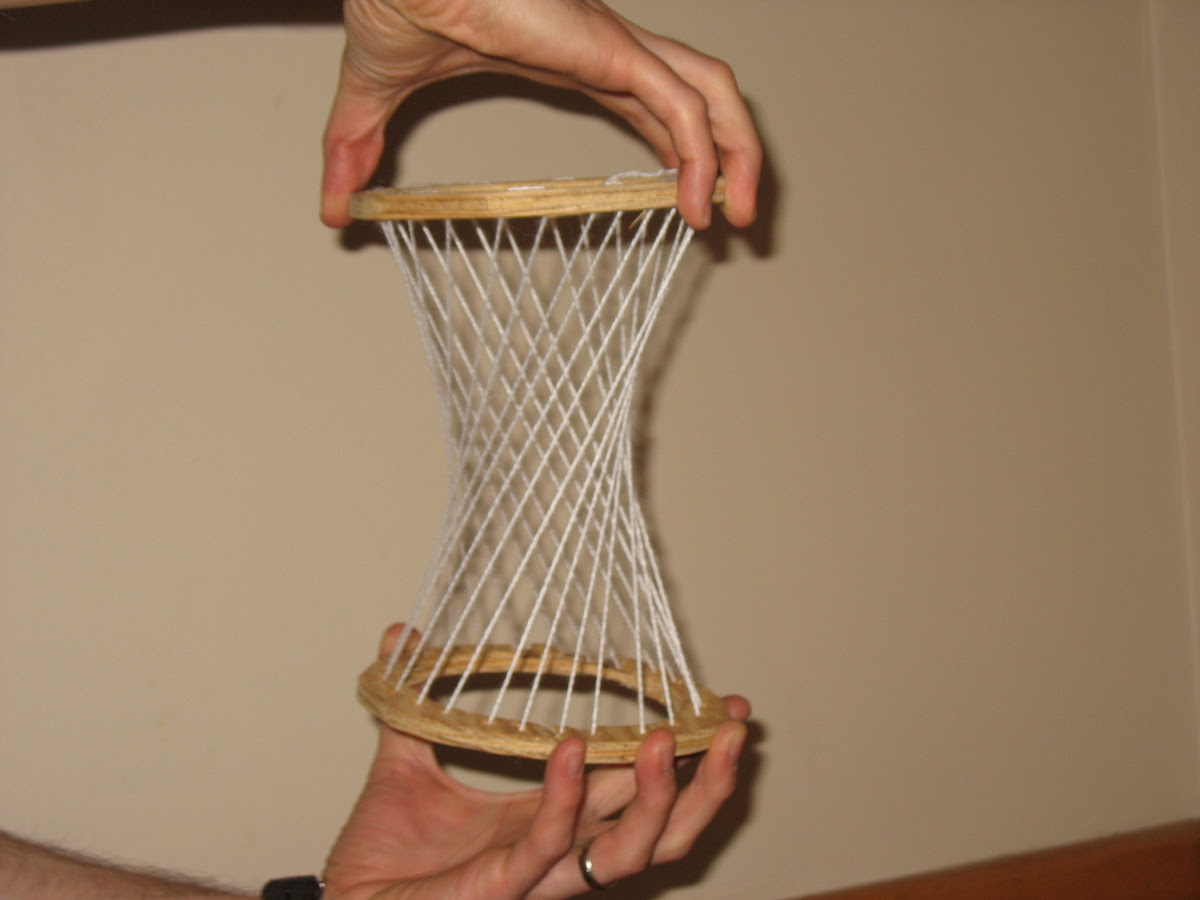 This may be demonstrated by the simple gadget above. Two rings are connected by ropes in the cylindrical, regular way. If you twist the two rings relatively to one another, you get a hyperboloid of two sheets. It may be more curved or less curved, depending on how much you twist the rings.

How can we see from the equation for the hyperboloid that there are two straight lines going through each point of the surface that are fully contained within the surface? It's not hard. Consider, for example, the intersection of the hyperboloid of one sheet with the (flat, uncurved, vertical) plane given by \(x=+a\). Because \(x=+a\), we see that the term \(x^2/a^2=1\) on the left hand side exactly cancels the term \(+1\) on the right hand side and we are left with the equation\[

\] relating the coordinates in the \(x=+a\) plane. But this resulting equation is equivalent to\[

Note that at each moment, the (rotating) straight rod connects two points of the upper and lower "ring" exactly as it did in the wooden model on the photograph! The hole in the glass is the intersection of this surface with the \(x=0\) plane, in certain coordinates, and this intersection is given by \[

\] which is a hyperbola. (In this case, we have \(x=0\) and not \(x=\pm a\) which is why the term \(1\) on the right hand side wasn't cancelled.) So you may not only understand why the hole may be curved even though the rod is straight. You may also calculate its shape and the shape is something very simple and familiar, a hyperbola.

I suspect that this text won't be useful for anyone because everyone who has already learned how to read (especially English) also knows the conic sections. ;-)

I forgot to tell you that you were cheated, too. I introduced the Ještěd TV tower as a ruled surface that "may be constructed out of straight lines". Because it is rotationally symmetric but it is not a hyperboloid, there are no straight lines going through the surface! But some of the lines are pretty close to straight ones – their curvature radius is significantly greater than the distance of its points from the axis of the tower.

Since my kindergarten years, I liked another "straight looks curved" trick: a pencil behaves like a rubber if properly managed. Can you explain what is the geometric object that actually looks curved, why it looks curved, and how to calculate its shape?
Luboš Motl v 4:21 PM
Share