I think that generic parties and similar events are not a good material for a weblog that is expected to be global in character. One reason is that most readers are not interested; another reason is that I am intrinsically an introvert and privacy is something I consider important. 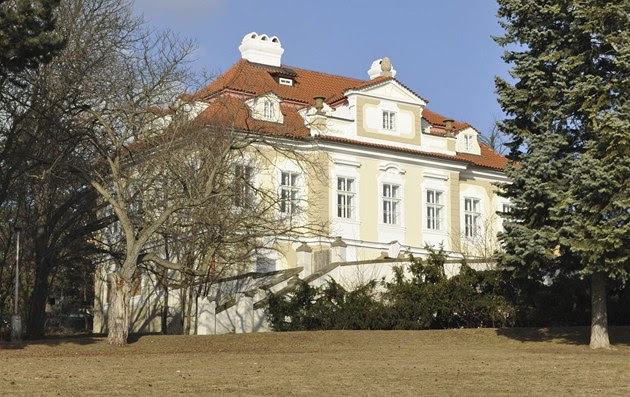 But Czech ex-president Václav Klaus' 73rd birthday banquet may be different. It is a public event of a sort. I was invited and I went there yesterday. It was organized in the headquarters of the Václav Klaus Institute, in the Chateaux of Hanspaulka, the villa above.

Hanspaulka is "better than the adjacent places" villa quarter in Prague, Northwest from the Prague Castle, a subhabitat inside the villa neighborhoods called Dejvice, Střešovice, and Bubeneč. Prague dwellers will surely forgive me this outsider version of the Prague geography. I was walking a lot – 15 miles a day – and the "social shoes" are not good for that so some of my blisters are really bloody bastards. By the way, it was a nearly sunny, very warm, but fortunately not tropical, day.


Even though Klaus hasn't been the Czech president for more than a year, lots of famous people I used to know from similar banquets at the Prague Castle attended. The 100-150 guests included the current president Zeman, the Godfather of the Czech Catholic Church Dominik Duka, economists Zamrazilová, Tříska, Ševčík, Dyba, recent ODS party boss Kuba, ex-prime minister Nečas, the founder of the Czech private TV industry Železný, an ex-MEP and TV boss Bobošíková, national gallery director Knížák, violinist Hudeček, Klaus' and his wife's relatives and families, sometimes with spouses, sometimes without, and so on. Of course, Klaus' close aides like Jakl and Weigl as well as his ex-aide Hájek, the publisher of the Counterstream, couldn't have been missing.


Of course, at the beginning, I would feel as an extraterrestrial alien in this environment that isn't really mine. I think that this ET status used to be even worse whenever I would have taken a companion for such an event. But I started to chat.

Economist Tříska who is otherwise a nice guy and who would talk about some successful medical treatments he has undergone has questioned whether I have ever taught at Harvard. Klaus may be just trying to find serious faces for his crazy ideas, so he created me and invented the story that I have been at Harvard faculty. I wasn't opposing his musings about me, just smiling, because it was both silly and completely natural assuming some complete ignorance. And I couldn't have convinced him to abandon his conspiracy theory, anyway. ;-)

I have praised Ms Zamrazilová as the only "hawk" in the Czech Central Bank. We agreed that it was silly to fight against deflation or a strong koruna just because some sectors of the economy decided to make their products and services cheaper. The deflation expectations weren't really created and people can't really postpone their telephone calls and other things for a year so it's silly to fight the deflation caused by these events. I have completely forgotten that she has been replaced as a member of the monetary committee by Mr Rusnok, an ex prime minister.

At our beer-based table (the food and beverages were wonderful, too bad that I didn't have much more time to fill my stomach!), Prof Knížák, a top visual artist, told us about some recent confrontations with idiots etc. Most of us complained that students and even citizens are being drowned in pseudo-information at schools and in the media that prevents them from thinking, from developing a compact framework to produce their own justifiable conclusions and "extracts" of the important things etc. Knížák would often be repeated for his memorable quote


[These days,] being informed is a sign of the lack of education.
[Orig.: "Informovanost je znakem nevzdělanosti."]


So true! Some people whom I often meet – I won't tell you details – are excited by some tabloid-level, sensational, superficial, and similar low-quality "super important news" that are being urinated by the media all the time. I think that I have very good reasons not to pay much attention to such "super important news" but the majority of the people is thinking differently – more precisely, they are not thinking at all and they're being totally brainwashed by all the stuff in the media. To some extent, I am talking about the tabloid media except that – as we agreed – all media have converged closer to the tabloid genre. In fact, I would even say that some of the traditional "tabloid media" produce a higher-quality journalism for the thinking people these days.

Our discussions were interrupted by the official speeches. Before the banquet began, a local grandmother with a baby carriage would tell me something about their neighborhood, architecture, and that she thought that the villa of the Klaus Institute has been quiet for a year. I told her about the intense publication activity of the institute. She admired the billionaire-turned-politician Babiš, perhaps the currently most popular Czech politician among the powerful ones who would have no supporters at the banquet. We later learned that Klaus gave 30 talks and 20 interviews in the last year. Stunning numbers.

Most of the initial speeches were dedicated to the vitality of the 73-year-old Klaus. The Klaus-Zeman monologue was started by Klaus who complained that he was forced to leave the Prague Castle by someone (Zeman was standing next to him LOL) so he had to resort to this smaller chateaux instead but it has some advantages, too. The current president Zeman, who is 3 years younger, got a new staff for the cripples (longer or shorter by 1 inch than the previous one, so it's less sexy) from a famous physician, Prof XY. Klaus has been just playing tennis (doubles: they lost) with the same Prof XY. And so on. Zeman didn't forget to mention that he's being jealous about Klaus' energy, health, and vitality – jealous in the candid, Czech fashion. ;-) Zeman also said that while he, Zeman himself, used a limousine to get to the highest Czech peak, Sněžka, while Klaus was walking, Klaus actually used a cable railway for 1/2 of the distance, so the difference between them perhaps isn't that big!

I've had wonderful long conversations about the arts and the organization of the society and the Academia with a group of very interesting people, especially Mr Pavel Drbal, but the group also included A.M., a linguist focusing on Romanic languages, who just got some order from Juan Carlos a day before he resigned as the Spanish king. At the end, Klaus would come to our table. There were about 7 people and he would say something like "you have hijacked Mr Motl for discussions". Why me, again? It wasn't the first time when I was singled out in this way. One explanation is that from Mr Klaus' viewpoint, I am the most provoking or memorable guest. I have mixed feelings about this explanation.

Fortunately, I was quickly given a more conservative explanation why I differed from the rest of the group. All of them were direct close relatives of Livia, Klaus' wife! I should have figured that out, of course, because I know that her maiden name was Mištinová and several people at my desk revealed their surname was the same. ;-) But I didn't have time to think this deeply, especially because sometimes it's enough to wait. Moreover, everyone spoke Czech which confused me, thanks to Livia's Slovak roots. They explained to me that their family's links to Slovakia are almost negligible.

Some of the most detailed conversations took place with P.M. I won't go to details because this topic may jump to the too personal sphere again. But when Klaus came to our table, he showed that he still finds the topic of environmentalism extremely provoking. He would also mention a prime minister of an unnamed island linked to Europe (I won't reveal his name in this sentence) who loves to show how green he is by wearing green outfits and posting green carpets on the walls of his office. Really, isn't it crazy that Cameron claims to be the leader of conservatives? :-) Such people might be more dangerous than the radical, loud environmentalists like Mr Liška who don't even get to the Czech Parliament, we agreed.

I could go on for a while but instead, let me mention that I was impressed by the performance and battery life of my new Lumia 520. I charged it yesterday in the morning, before the event, and now, exactly one day later, the battery is exactly at 50% even though the phone worked quite hard yesterday and I didn't turn it off for the night. The work included some telephone calls, dozens of pictures and videos, including panorama photographs, GPS-powered Nokia Here offline maps that I have used many times to get to the right place, and about 5 hours of the music player. (I have also listened to about 7 songs by the band called The Yellow Dog led by Mr Hejma – whom I met at the banquet. I only fully appreciated that it's the same guy when I was returning to Pilsen LOL.)

By the way, the Lumia 5 Mpx (2592 x 1456) pictures seem OK but a bit less sharp than what I can get with my full-fledged digital camera. Finally, I could also try the Nokia Panorama app which takes and combines up to 5 photographs into a very wide panorama. It works really smoothly. You take a picture, turn your body to the right so that a disk on the display fits into an empty circle on the left. You must make sure that there are some patterns in the field that the phone may use to connect the pieces correctly. When you're finished, the app automatically merges the pictures.

Click to zoom in. This really makes difference now because the width of the picture is almost 8000 pixels! Unfortunately, PicasaWeb truncates the width to 2560 pixels at most. If you badly need the full pic, let me know. Here's another one with the bridges:

Finally, this is the panorama of the Old Town Square:

You may check the quality of ordinary photographs by checking this random picture of a famous scenery with the bridges including the Charles Bridge:

Yes, some huge bubbles on the Old Town Square. A very simple and effective technology that I've seen at about 5 places of Prague yesterday. This method to create huge bubbles is really cheap – this lady was using "jar", the cheapest traditional Czech detergent for washing the dishes as her material of choice. ;-)
Luboš Motl v 8:40 AM
Share