It's the female hurricanes that are destructive: paper

I have made the observation – not seriously – many times, especially after the 2005 Atlantic hurricane season. It seems that the women hurricanes such as Katrina, Rita, and Wilma are those that are strong and that destroy things. Finally, this observation was made independently and published in peer-reviewed literature.

Thanks to W.M. Briggs who commented on the paper critically while the media covered it uncritically. 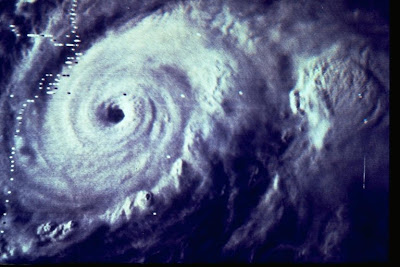 The hole at the center of a hurricane is often called an "eye" but new research suggests it is a vagina.


by Jung and 3 co-authors from Illinois and Arizona has made it to the Proceedings of the National Academy of Science of the United States of America. Not bad.


They analyze the statistics of the hurricanes' sexual organs and suggest a specific hypothesis on top of the obvious results: the women hurricanes are more deadly because people are sexist pigs and they underestimate these hurricanes' abilities! ;-)


I think that at least in a recent decade, it's obvious that the female major hurricanes were physically stronger in average even before one considers any response by the humans, or any influence on the human society, for that matter. I am confident that the asymmetry is obvious – but not sufficient for a five-sigma discovery of a new law of Nature, "female hurricanes kill". To estimate the degree of surprise, one would have to carefully study the fraction of the hurricanes that are getting male and female names and other things.

This is a good example of the fact that unlike leftists, Nature doesn't impose any 50-50 quotas on men or women – or any other groups of objects or events that could be demanded to be "equal" in a certain quantity except that they have absolutely no reason to be equal. The higher percentage of the females among hurricanes is a good analogy of the "global warming". Men and women are expected to balance each other – and cooling and warming episodes are expected to cancel out, too. Except that this is just the mean value and statistics pretty much guarantees that this mean value is never realized. In the case of the hurricane names, it is spectacularly obvious that there can't be a real causation, especially because the names are decided before the season (and the cyclone) starts.

Let me wrap this short blog post with a joke that some of you may already know. The paper is consistent with the old wisdom about the difference between women and hurricanes. There is none. When they are arriving, they are a pleasant warm humid summer breeze. When they are leaving, they are taking cars and houses with them. ;-)
Luboš Motl v 5:53 AM
Share