The experiments that have been clearly accepted require at least three "flavors" of neutrinos, namely the \(SU(2)\) partners of the charged leptons called \(e^\pm, \mu^\pm,\tau^\pm\) that are called\[

\] The Greek letter \(\nu\) ("nu") stands for a "neutrino" and it hasn't been copyrighted by an artist yet. A "neutrino" is a word invented by Enrico Fermi. This word may be translated from Italian to English as a "small stupid Italian neutral thing" (you see that the Italian language is more concise).


ATLAS contest, off-topic: Out of 521 competitors, your humble correspondent is back in top ten right now.

A charged lepton such as the electron/positron is described by a complex 4-component Dirac spinor which is why we encounter both electrons and positrons (electrons' antiparticles) and each of them may be spinning up and down. Recall that \(2\times 2 = 4\).

However, the known neutrinos have a correlation between the helicity and their being antimatter: the neutrinos we may produce and see are always left-handed while the antineutrinos are right-handed. That's why a two-component Majorana (or, less appropriately, Weyl) spinor is enough for the description of a neutrino flavor. \(SO(10)\) and higher grand unified theories – and their stringy extensions – like to predict right-handed neutrinos, too. They are likely to exist because the existence of heavy right-handed neutrinos is capable of explaining the low mass of the known neutrinos via the "seesaw mechanism".

However, the masses of the "mostly right-handed" and "mostly left-handed" neutrino eigenstates are so different that the "in principle" 4-component Dirac spinor for neutrinos and antineutrinos (a spinor relevant if the right-handed neutrinos exist which is uncertain) is effectively split into two 2-component Majorana (or Weyl) spinors, anyway. At low energies, only the single well-known Majorana (or Weyl) effectively 2-component spinor is needed to explain all the known observations. If the additional, massive Majorana 2-component part of the Dirac spinor doesn't exist, the nonzero mass of neutrinos implies that the neutrino and the antineutrino are really the same particle and must be able to oscillate in between each other. (However, the knowledge of the angular momentum prohibits the most generic "transmutations" of this sort, anyway: a left-handed neutrino/antineutrino has to stay left-handed.)


At any rate, at least three flavors of the neutrinos – electron, muon, and tau neutrinos – are definitely needed to explain the known data from neutrino experiments, including the neutrino oscillation data. You may see the observed values of the neutrino mass matrix parameters here. All the three mixing angles (12,23,31) between the three flavors are known to be significant – i.e. the mixing angles are not substantially different from 45 degrees which is why the simplified association of the neutrino eigenstates with the electron, muon, and tau is really bad in Nature. The discovery of a nonzero, and pretty large, angle between the flavors 13 was only made recently – and it was rightfully interpreted as a cute confirmation of a prediction by F-theory models in string theory.

(The existence of the nonzero 12 and 23 mixing angles has been known for 2-3 decades from the solar neutrino oscillations and the atmospheric oscillations, respectively, in this order.)

And the three mass eigenvalues are such that two of them are close to each other – with the difference of their \(m^2\) equal to the square of \(8.5\meV\) or so – while the third eigenvalue is substantially different – its \(m^2\) differs from the \(m^2\) of any of the previous two by something like \(50\meV\) squared. The binary question whether the third, special neutrino eigenstate is heavier or lighter than the other two (the "straight/reverted hierarchy" question) remains unanswered so far, and so do the absolute values of the masses (all the eigenvalues of \(m^2\) may be shifted by a universal, small enough constant, and the predictions for the experiments will remain largely unchanged because the oscillations are the only information about the masses that may be measured so far, and the character of these oscillations only depends on the differences of squared masses).


The existence of at least three flavors of neutrinos is necessary to be consistent with the basic, unquestionable experimental constraints – the solar and atmospheric neutrino oscillations were enough to make this conclusion. That hasn't stopped people from considering the possibility that there exist additional flavors of neutrinos. The canonical name of the hypothetical fourth neutrino flavor of neutrinos is the "sterile neutrino" because it would be a neutrino that doesn't routinely have \(SU(2)_W\) sex with a charged lepton, unlike its three colleagues. This general "disconnectedness" with the sex symbols of the charged world (I apologize to the quarks for talking them down but they're the best fermionic guys of color) would make them much less visible.

If you have never had any \(SU(2)_W\) sex, don't cry; I haven't experienced it, either. But some of your quarky friends may know what it is all about.

As far as I can say, the existence of additional neutrino flavors isn't really motivated by any deep physics ideas but it is not banned, either. It's a possibility that we shouldn't a priori exclude. It's compatible with the general principles of effective field theories as well as the string theory model building. And sometimes, experimental hints may be abused as an empirical justification for sterile neutrinos. A recent example is the \(3.5\keV\) X-ray line seen in the Cosmos that has been interpreted as a possible sign of sterile neutrinos (or moduli or axion or axinos, among other possible corpuscular explanations of the signal which may be a fluke, anyway) employed as particles of dark matter.

This was some background. Let's return to today.

As the Symmetry Magazine pointed out in a new article today,


the Neutrino 2014 conference is just taking place in Boston these days. Today, MINOS announced the new results that may be summarized by the following exclusion money graph: 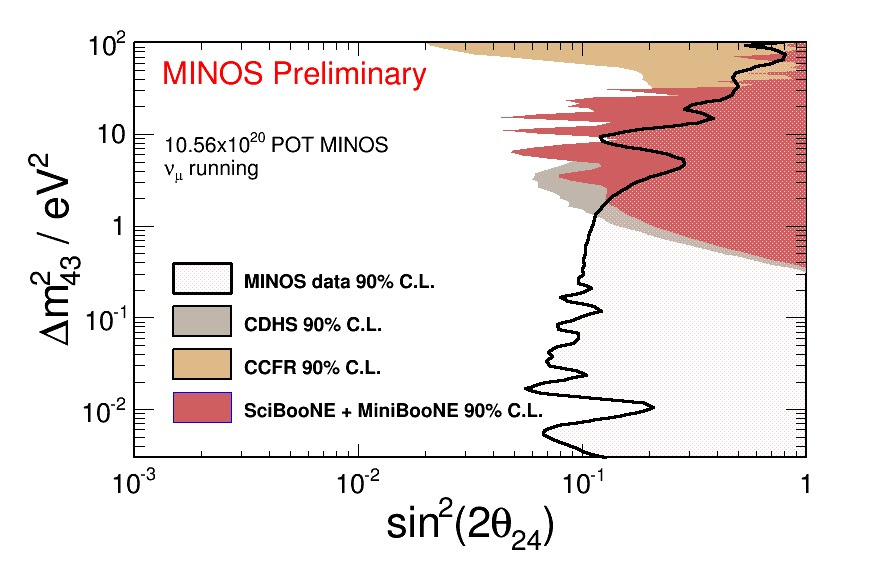 Everything on the right side of the black curve – in the subtly pink dotted region – has been excluded by MINOS. Previous experiments with names listed in the graphs have falsified the appropriately colored regions in the graph. You see that only MINOS was able to address the lower portions of the graph. You see that the \(y\)-axis in which MINOS was able to penetrate deeply is labeled as\[

\] is larger than \(0.1\) or so. Note that the squared sine is maximized for angles such as \(\pm 45^\circ\) and \(\pm 135^\circ\) where it is equal to one. MINOS isn't able to exclude a sterile neutrino that is made nearly invisible by too weak interactions – by too weak mixing with the known fertile neutrinos – and like any experiment, it isn't able to exclude neutrinos that are "really close" in mass to the known neutrinos flavor.

But MINOS is still able to exclude sterile neutrinos that would be much more closely attached – on the mass axis – to the known neutrino. Where's the key to this magical superior power of this experiment? Well, the experiment studies muon neutrinos produced at the Fermilab in Illinois that are being sent to a mine in Minnesota. So these almost invisible particles have a lot of space to go from the state "I" through states "J,K,L" to the state "M" – each transition by a letter is 125 miles long which makes the total distance 500 miles.

I hope that the American readers won't be to picky about the auxiliary "J,K,L" states in between Illinois and Minnesota, especially if they are ready to show me Ukraine on the map of Pakistan. All U.S. patriots who could be picky about the U.S. geography: Please be satisfied with the degree of respect towards America that I have just proven by having used the stupid medieval units of "miles". ;-)

MINOS is able to address the hypothesis about new neutrino species whose mass is very close to the fertile neutrinos' mass because those 500 miles is enough to allow these hypothetical neutrinos to oscillate even if the oscillations are really slow – i.e. even if the squared mass differences are really low.

An impartial appraisal of the importance of this new experimental result

As I have said, I don't find the existence of additional neutrino flavors well motivated but I think that the hypothesis about their existence is "conceivable" and cannot be immediately eliminated. On the other hand, if additional sterile neutrino flavors existed, I would find it rather unlikely that their mass is very close to the mass of the known fertile neutrino species. Such a proximity could be made more likely by a mechanism but I am not aware of any natural or otherwise justified mechanism of this sort.

One more comment about today's news from the neutrino experiments. EXO-200 has improved limits on the neutrinoless double-\(\beta\) decay of germanium-76 and xenon-136. The improvement is four-fold. The half-lives are longer than \(1.1\times 10^{25}\) years or so. That allows to place the absolute neutrino masses, assuming that they are Majorana particles identical to their antiparticles, below \(0.2-0.4\eV\).