Exactly 100 years ago, the Great War became unavoidable. (That's how the people called a world war before they were forced to realize that this exercise is repeatable.) 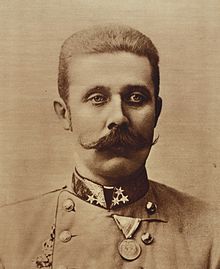 On Sunday, June 28th, 1914, the prospective Czech king – who also managed to be destined to become the Hungarian king and the emperor of the rest of Austria-Hungary, too – archduke Franz Ferdinand d'Este, along with his wife, Czech countess Sophie (Žofie, genetically Czech aristocrat, culturally fully Germanized) who was afraid of her husband's safety (rightfully, it turned out, but her fear didn't help), was murdered during his visit to the Bosnian capital of Sarajevo, in a South Slavic region that would belong to Austria-Hungary at that time.

The assassin was Gavrilo Princip, a Bosnian Serb whose act was almost certainly coordinated by the Serbian secret services or parts of the Serbian military. Serbia had ambitions to destabilize the South Slavic regions of the Austrian Empire, Croatia, Bulgaria, and others and the principle or the principal goal of Princip's and other efforts was to create something like a Great Serbia. Well, let's use the word: they simply wanted to create Yugoslavia. ;-)


Princip would be arrested in Terezín, Bohemia – this fortress would become a softcore concentration camp during the following world war 3 decades later. He would die there in Spring 1918. The bullet that ignited the Great War may be seen on the Konopiště Castle, Czechia.


The tragic implications could have been partly predicted. However, from a short timescale point of view, Austria-Hungary had the undeniable and understandable right to declare war against Serbia – which it did, exactly one month later (July 28th, after Serbia rejected friendly Austrian offers to allow the Austrian police to freely investigate the murderers on the Serbian territory etc.). If Putin's successor or Dmitry Medveděv were murdered by a Ukrainian assassin in Crimea – feel free to invent a similar example involving U.S. politicians etc. – Russia would almost certainly declare a war against Ukraine, too. After all, the U.S. war against Afghanistan was justified by 9/11 in pretty much the same way; the world's public sympathies towards the U.S. and Austria were analogous in both cases, too.

The Austrian Empire had its existential interests much like Serbia had its expansionist ambitions and similar comments apply to Germany and others. The relationships between them were complicated and their dense network guaranteed that the conflict would escalate. Britain wanted to prevent Germany from becoming a new major power. France wanted to punish Germany for a war in 1870-71. Italy wanted to steal some Italian provinces from Austria-Hungary, and so on. In effect, the war was like a soccer championship match in which fans all over the world may join the game. ;-)

Austria would be hoping that a Blitzkrieg against Serbia would work smoothly and quickly. It wasn't the case. The war got complicated. The Central Powers (Germany, Austria, Ottoman Empire, Bulgaria) around Austria would finally lose the war; Triple Entente (France, Britain, Russia, Italy, America, and others, including Serbia that only existed for another year after the war erupted) countries would win. The German, Austrian, Russian, and Ottoman empires would be dissolved as empires. New countries such as Czechoslovakia and Yugoslavia would arise. About 5 million casualties had to die on each side – about 10 million in total.

The numbers are less scary than those quantifying the Second World War but you must appreciate that the total world population in 1914 was somewhat lower (1.8 billion) than around 1940 (2.3 billion), too. Yup, the growth between 1914 and 1940 wasn't huge. And one more aspect that makes the First World War worse is that the losers were in no way the "unified villains", like in the Second World War. Heroes and victims as well as villains were on both sides of the conflict. At least at the very beginning, Austria, France, and Britain had justice on their side; Serbia, Russia, Germany, and Italy were the culprits. The result of the First World War was a "random rearrangement" that had some advantages and some disadvantages relatively to the previous state of affairs. I say that despite the fact that I think that e.g. the birth of Czechoslovakia meant some positive progress. But the defeat of Nazism in 1945 was a much more clearly positive, noble goal, I would say – although the following rise of communism was negative and it was probably an inevitable consequence of the defeat of Nazism.

You may interpret the previous paragraphs as evidence that the nation states as we knew them up to the early 20th century were a lousy arrangement that would create unnecessary wars and suffering and some EU-like arrangement is a better one. But it's you, not me, who would say such a thing. The nation states are very natural. Equally importantly, the nation states allowed Europe to thrive in the relatively warless and prosperous period 1814-1914.

The 19th century also brought us many pernicious and toxic things such as Marxism. But it was only the 20th century when this junk began to significantly influence the world. It was the 20th century when these ideologies acquired the ambition to change the world, when self-confident politicians backed by these sick ideas began to construct plans how to take over Europe or the world. It was the 20th century when communism, fascism, Nazism, Europeism, feminism, environmentalism and similar -isms began to hijack the political institutions allowing them to control whole continents. We know it very well because some of these pathological ideologies – ideologies that made it possible both for conflicts and problems and for stagnation to be much more extensive, deep, and global in character – haven't been defeated yet, as of 2014.

The First World War was a catastrophe. From some viewpoints, it was the worst one – especially because it was "useless". It was global in its impact. On the other hand, it was also the conflict that marked the end of the relatively happy and safe world in which people and nations had their geographically isolated, understandable interests and the conflicts were more or less regional in character. After or during this Great War, the reasoning changed and most of the ideas and efforts capable of igniting a conflict became able to ignite a conflict at the global scale.

I reminded you that the exercise of a "world war" turned out to be repeatable. Czech readers know very well that the Sarajevo assassination has occurred later again. In 1997, the prime minister of the Czech Republic Václav Klaus would be visiting Sarajevo. While he was there, he was "assassinated" by two (now completely forgotten) traitors from his party who irrationally linked him to some rumors about corruption and who demanded his resignation. The havoc caused by these demands ultimately led to Klaus' resignation, indeed. His party got split but the Klaus core did pretty well and in the early 1998 elections, he managed to control the government after the "opposition treaty" with the social democrats of Mr Zeman, the current president, who would win the government chairs.

Last week, Prof Knížák, the artist and ex-director of our national gallery, told me that he would often argue with Klaus. But after the 1997 Sarajevo assassination, he would realize what kind of scum the anti-Klaus people are. He became a close friend of Klaus who drinks beer with Klaus about once a month these days ;-) and the arguments have pretty much faded away.
Luboš Motl v 9:38 AM
Share