Siméon Denis Poisson was born at the beginning of Summer 1781, on June 21st (like today), to a French royal soldier. He would die in 1840, at age of 58. He was a top French mathematician, geometer, and physicist of his era.

Both Lagrange and Laplace were his advisers. Liouville, Dirichlet, and Carnot (of the thermodynamic cycle fame) were among his students.

Revolutionary changes in France have influenced him in many professional ways. You may read it elsewhere.


But I want to mention his work. It's remarkable how many insights have been named after him.


First, there are some things he couldn't boast about. Some physicists are excessively conservative. Poisson was clearly an example. He would be the last leading opponent of the wave theory of light. As a hardcore reactionary, he would promote the corpuscular theory of light and the opinion that light simply could not interfere. Poisson was proven wrong by Augustine-Jean Fresnel.

During Poisson's last desperate attempts to prove that Fresnel was an idiot, Poisson discovered the Fresnel bright spot, sometimes also named an Arago spot or Poisson spot (!). That's a characteristic phenomenon associated with the wave nature of light. Later, I will mention that he would also write down an important equation related to the wave equation in classical physics. Not bad for a wave hater.

But Poisson's purely positive contributions are even more impressive.

He would improve the Laplace equation by adding the right hand side:\[

In statistics, we cannot overlook the Poisson processes. Things may "beep" at any moment, with some frequency, independently from the previous moments. The "beeps" associated with the decaying radioactive nuclei are the most canonical example of a Poisson process. If you quantify the probabilities that you obtain \(n\) beeps after some time, you may derive the Poisson distribution.\[ 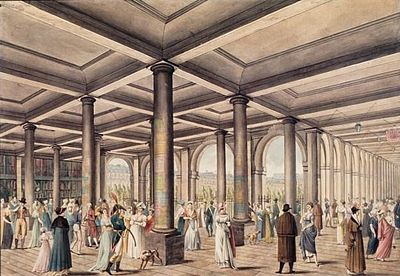 A 19-year-old Poisson may be found on this picture from Paris. You may call it a higher society. At any rate, prostitutes are debating with their consumers.

Poisson has also invented a method to count cells etc. (if there are too many), the so-called method of Poisson zeroes (or the most probable number method). You dilute the sample enough (by a sufficient factor) so that you start to see holes, and the estimated number of copies is a calculable function of the dilution factor.

The Euler–Poisson–Darboux equation is some partial differential equation that is rather important in solving the classical wave equation. Given Poisson's opposition to the wave theory of light, that's quite an ironic contribution by Poisson, isn't it? But the history of physics is flooded with similar ironies. Quantum hater Einstein's contributions to the quantum theory of light, Bose-Einstein quantum statistics, and entanglement are among our beloved modern examples.

Poisson's ratio quantifies the compression and strain of materials.

When it comes to the Fourier transformation, Poisson would be the man who realized the Poisson summation formula\[

\] which effectively says that the Fourier transform of the sum of delta-functions located at all integers is the same sum (up to possible stretching, shrinking, and/or factors of \(2\pi\) that may depend on conventions).

Finally, Poisson is the father of the Poisson bracket and the Poisson algebra generated by the brackets.\[

\] This rather contrived formula is one of the symbols of the culmination of advanced, abstract classical physics. Since the 20th century, we've known that this bracket is what the simple quantum mechanical commutator\[

To a certain extent, you might be shocked that Poisson (and Hamilton – who used the bracket in his Hamilton equations of motion; and I have forgotten which man did what even though I used to know this history in some detail, but only for a little while) was able to invent such a seemingly artificial construct that just happens to map to something extremely simple once we switch to quantum mechanics (which he couldn't have known due to his confinement in a wrong century).

Much like the Poisson bracket (from the Hamiltonian formalism) simplifies to the commutator in quantum mechanics, the action (from the Lagrangian formalism) simplifies to the exponent in the Feynman path integral which allows one to directly write down the formula for the transition probability amplitudes (classical physics doesn't allow us to write compact formulae for the "answers" to questions about the evolution; all the answers are obtained "implicitly"; you're told to find a solution to some equations and to derive the answers from the solution). In both cases, the quantum formula is more straightforward than its classical limit (or "its classical counterpart", if you prefer to deny that classical physics is a limit of quantum mechanics).

The third example of the same simplification in quantum mechanics that I would remind you is the Noether theorem. Emmy Noether's original papers about that theorem were virtually unreadable and extremely contrived. In quantum mechanics, the Noether theorem – the one-to-one map between conservation laws and symmetries – is proven easily. The equation \([H,L]=0\) may be either interpreted by saying that the Hamiltonian is symmetric under symmetries generated by \(L\), i.e. as a symmetry of the dynamics; or it may be interpreted by saying that the Heisenberg-equation-computed time derivative of \(L\) vanishes, i.e. as a conservation law. These simple sentences replace dozens of unreadable pages from Noether's pencil.

Back to the Poisson brackets. Poisson realized that the brackets allow him to define the algebra which also obeys the Jacobi identity.\[

\] In terms of the commutator, this identity is easy to be proven. Each of the the three double commutators may be decomposed to \(2\times 2 = 4\) terms with various signs, and these \(12\) terms may be seen to arrive in \(3!=\)six pairs of identical twins (\(FGH,FHG,GHF,GFH,HFG,HGF\): all permutations) with the opposite signs so everything cancels. But if you replace the commutator \[

\] by the Poisson bracket, the proof becomes somewhat less elegant and natural. Second phase-space derivatives are needed to prove the identity, along with the Leibniz rule for the derivative of a product. Still, Poisson was able to see through such algebraic facts – explosive traces of quantum mechanics that may already be seen in the world of classical physics if you rewrite it in a sufficiently sophisticated form.

I have mentioned Poisson, Hamilton, Lagrange, and Noether as the "prophets of quantum mechanics" within the framework of classical physics. In this context, I can't resist to remind you that Ludwig Boltzmann was another "seer" of this kind. His understanding of classical statistical physics made it clear that it should ultimately be possible to count the states in the phase space (in the sense of integers and countable sets: see his tomb, it's clear that it's what he meant at the end) and indeed, quantum mechanics said that the phase space is effectively discrete, with one basis vector per cell of the phase space whose volume is a power of \((2\pi\hbar)\).

It's my belief that all these people would feel immensely satisfied if they could see quantum mechanics in its final form – as found in the mid 1920s – and the simplification of their seemingly convoluted insights that quantum mechanics brought to the plain sight. I am sure that they had to believe that all these discoveries of theirs had to have some deeper reason, something that shows why these apparently artificial structures in classical physics were actually natural and deep.

Too bad that no one has resuscitated Poisson, Hamilton, Lagrange, Noether, and Boltzmann yet. If you succeed, please let me know.
Luboš Motl v 7:00 PM
Share