While supersymmetry remains the most well motivated candidate for new physics, it seems that all the observations at the LHC up to the \(8\TeV\) run in 2012 show that no new physics is needed and all "excessively bold and obvious" proposals for new physics – those that could explain the unbearable lightness of Higgs' being – have been excluded.

The Standard Model seems to be a more "thrifty" theory than any other bottom-up effective phenomenological model, and because there's no significant contradiction between the Standard Model and the LHC data, one is expected to pick the 40-year-old theory of nearly everything as his preferred effective theory of choice. Empirically speaking, no other theory is doing better. 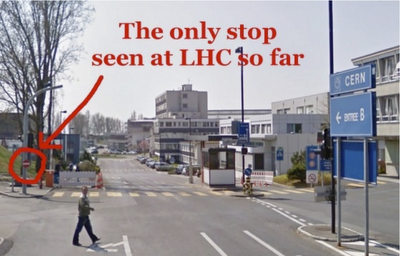 Well, the first two hep-ph papers on the arXiv today argue that this common wisdom may very well be wrong, in a very exciting way!


The second title probably jokingly refers to the theme of hospitals for theories.

I still think that the seven authors of both papers must be aware of the second group because it would be rather unlikely for two groups to publish a paper with pretty much the same speculative claim on the same day, just minutes after one another. However, I would normally expect some comment of the type "While this paper was being completed, we learned about some damn competing bastards [83] who wanted to scoop us; we're better, faster, correcter, and prettier than them, but we're also generous to cite their future paper because such incomplete future citations aren't counted, anyway."

But I don't see any such comment in either of the two papers so it is in principle conceivable that the papers are independent!


Their detailed argumentation differs and in many technical points, the papers are complementary. However, the basic claims seem to be identical and I will group all these 3+4 authors into one gang.

To prove that they are not Seven Dwarfs, The Magnificent Seven starts with an empirical observation. Neither ATLAS nor CMS has detected a clear 3+ sigma deviation from the Standard Model. But if you combine their results, we do see one 3-sigma deviation in a rather important quantity. It is the \(W^+ W^-\) cross section, i.e. the probability that the proton-proton collisions result in the creation of a particle-antiparticle pair involving the \(W\)-boson.


The ATLAS detector measures this quantity to be about 20% or 2 sigma higher than the Standard Model, and so does the CMS. In combination, it's a tantalizing 3-sigma excess. This may be a fluke, an accident, but it is a rather important quantity and it may mean something.

What is it supposed to mean if this excess is real?

People are tempted to use the one-scale-fits-all method to describe what the LHC has proven and disproven. Because the LHC has placed lower bounds on the masses of many particles in many models that are comparable to \(1\TeV\), and of course that the detailed numbers depend on the model and the detailed particles that are being constrained, people like to sloppily think that "all new particles are probably heavier than \(1\TeV\)".

But as the loophole discussed by these two papers shows (and it is not the only loophole), such a conclusion is too sloppy. In fact, their model is compatible with all the LHC observations, actually produces better predictions than the Standard Model, and it has lots of new particles ligher than \(300\GeV\)!

They present several possibilities and all of them seem to work. The "most extremely light" scenario has both top squarks (stops) around \(200\GeV\), the whole triplet of winos a little bit lighter than that, one bottom squark (sbottom) around \(100\GeV\), and the LSP bino near \(100\GeV\). That's quite a lot of new particles that are almost as light as the Higgs boson – and this scenario is still compatible with all the LHC observations!

In fact, this setup is more accurate in the description of the current LHC data than the Standard Model – who can say that? In particular, the excess in the \(W^+ W^-\) cross section is explained by the additional \(W\)-bosons created from the decay of the stop squarks that are sometimes produced – either direct decays or indirect decays through the winos.

Click the picture if you need to prepare squarks at home. I recommend you to serve it with winos.

I have actually understated how many new particles may be hiding below \(250\GeV\). Most or all the sleptons could be sitting there as well – and still no contradiction with the LHC data would result. In particular, a light smuon could also explain the \((g-2)_\mu\) anomaly – the apparently slightly wrong measured value of the muon's magnetic moment. Several other anomalies and desired properties of dark matter may find a justification in models of this kind although I would say that none of these "additional advantages" is really robustly justifiable if separated from the rest.

Both groups perform various fits and statistical tests and decide that the model with the light stops gives more accurate predictions than the Standard Model – and the statistical significance of this advantage is equivalent to something like a 3-sigma evidence.

To me, the degree of agreement between these two superficially completely independent papers (although both papers are aware of their common pre-history and related papers written by authors from both groups in the past) seems kind of remarkable. I may even imagine that they may have heard about some new top squark rumors a few days ago which made them write these very similar papers.

If one of the scenarios from these papers would be right, naturalness would be completely saved. It's interesting that this possibility has been overlooked. What's "special" and potentially "contrived" about it are some small gaps between the sparticles' masses. There are many pairs or groups of particles that may be assumed to have small gaps and it's plausible that these seven authors are among the first ones who have sufficiently carefully looked into this particular possibility. Well, in this model, it's really the gap between the superpartners and the original Standard Model particles that is "too small to be seen clearly".

The possibility suggested by these papers should be rather safely confirmed or eliminated by the 2015 LHC run at \(13\) or \(14\TeV\). But it's somewhat plausible that some stronger evidence for or against this possibility could emerge from more careful analyses of the existing 2012 data, too.
Luboš Motl v 7:46 AM
Share