The successes of the ISIL/ISIS, a terrorist organization working to establish the Islamic State in Iraq and the Levant, have brought a new twist (rooted in very old anti-civilizational delusions) to the unstable politics of the Middle East.

"Dr Ibrahim", the 40-or-so old "caliph" and the permanently masked chieftain of the ISIL/ISIS terrorists. Caliphates – territories led by a Muslim head – were founded after Mohammed's 632 AD death as a religious (and later political) institution. The previous (or so far latest) caliphate, the fifth one, was abolished by Turkish leader Atatürk in 1924 – he managed to convert Turkey to a nearly modern, almost secular country.

The last letter L/S in ISIL/ISIS is either Syria or the Levant. In effect, it may make a difference because "Syria" would be a relatively "modest" ambition of these bigots. On the other hand, the "Levant" refers to the Orient, the whole Eastern Mediterranean with its potentially flexible definition – see e.g. these diverse maps of the new black would-be state (including the Pooh bear on his trip to China).


Just some months ago, we would visualize the politics of the Middle East as a combination of the "Arab winter" echoes of events that some truly ignorant and naive people used to foolishly call the "Arab spring", the Iranian nuclear threat against Israel and others, and the long-lived inhumanities perpetrated by both sides in the Syrian civil war. These days, the new changes in Iraq seem to be much more urgent.


These ISIL/ISIS nuts already control a large portion of the Iraq+Syria territory. The following map reflected the situation as of last Friday, 3 days ago: 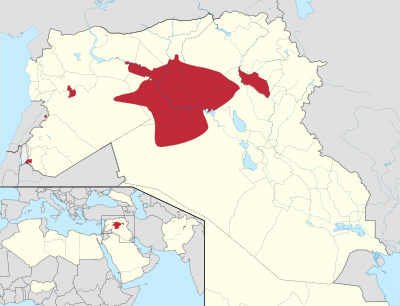 Their advances have significantly rearranged various alliances in the Middle East. The bosses of Iran began to sleep with Barack Obama, John Kerry, and others (and their mutual sex is really loud these days) whose new alliance with Iran – offering its Shiite forces to defeat the ISIL/ISIS Sunnis – is much stronger than their alliance with Israel, something that is being preserved at the verbal level only.

Saudi Arabia is a Sunni state and some people argue that ISIL/ISIS enjoys the Saudi support. I don't have any precision knowledge but I doubt this belief, anyway. Saudi Arabia is still connected with the interests of a particular dynasty and history which is simply very different from the "caliph" behind ISIL/ISIS.

Almost everyone around is against ISIL/ISIS. Nevertheless, the latter has made lots of progress, anyway. Should Iran team up with the U.S. and others and to destroy ISIL/ISIS? Is such an enhanced war a really good investment?

I doubt it. If the Western folks have the temptation for social-engineering in the region, they should create a more stable arrangement that actually reflects the current ethnic and religious demographics more accurately than the existing states. The power of ISIL/ISIS seems clear to me. They're terrorists because they've had no official power so far. But with some country, they could behave in ways not too different from the average of the troubled Middle East.

In particular, I think that like Ukraine, Iraq has been proven to be an artificial inhomogeneous country whose integrity shouldn't be a top value for any realist politician because it's clearly not an important value for the citizens of Iraq themselves. They differ too much. That's why their patriotism is so weak and why the troops defect so often (despite the huge amounts of money that the U.S. has paid for their training).

There exist politically and religiously different groups in Iraq.

In particular, I still view the Kurds as the most oppressed ethnic group on the territory of Iraq and adjacent countries. Recall that the Kurds are an Iranian nation in the more general sense of the word. They're rather diverse and religiously and politically moderate but most of them believe in the Sunni Islam (unlike the Iranian Islamic Republic which is Shiite). Israeli PM Netanyahu has called for the Kurdish independence in Iraq and I agree with that. In fact, I think it would be sensible to establish a new country of Kurdistan that would include pieces from other countries as well.

Of course that I don't think that Turkey and others would agree with these territorial changes. But if they were truly rational, they would agree. The ISIL/ISIS caliphate could be established as well. If the new arrangement of countries would more accurately reflect the actual nations' and groups' power on the ground, the desire for further wars and territorial changes would dramatically decrease because way too many people would start to think that "the setup is essentially fair".

We won't get there. Instead, various foreign countries will keep on supporting various random forces in the region, randomly fight against others, and support all kinds of nearly unsustainable patterns on the map. It's unfortunate because the Middle East will not get any opportunity to calm down.
Luboš Motl v 10:01 AM
Share