The problem of Richard Feynman


We learn that "Feynman is no hero to us" – he's surely a hero to me – and that Feynman was a "sexist" in attitudes and especially actions which must be so bad. 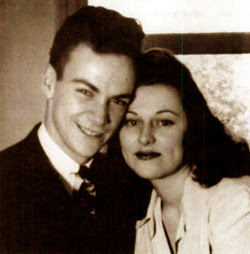 We are told that it's so bad that he was picking girls in bars. Feynman would pretend he was an undergraduate and had some successes with girls, including the graduate students' girlfriends.

Well, Feynman could afford to market himself as an undergraduate because he looked like one – and he was spiritually a lively undergraduate for most of his life.


What Francis doesn't tell us is that Feynman was a sensitive loving man who loved and cared about Arline Greenbaum when she caught tuberculosis.


Feynman is also criticized for admitting that he was the smartest guy in the room, even if his friends were present in the room. And you know, these stories are almost always right! Matthew Francis may be jealous because he often fails to be the smartest man in the room but that doesn't mean that Feynman wasn't.

Francis also repeats the meme we could have seen elsewhere that


Ironically, Feynman believed that Ann was a whore because she did not return sexual favors in exchange for sandwiches.


Francis' version is a bit different:


Not every man going to a bar psychs himself up by thinking of every woman as “worse than a whore” if she won’t sleep with him.


These propositions are based on several sentences describing events in a bar from a chapter of Feynman's book about his life such as:


A few moments later Ann says to me, “Why don’t you come and sit at the table here with us?”

I think to myself, “Typical bitch: he’s buying her drinks, and she’s inviting somebody else to the table.” I say, “I can see fine from here.”


It seems totally clear to me what Feynman actually meant by this sentence and by his terminology. At least in this context, a "bitch" is a word for a woman who abuses the fact that a man loves her or has a crush on her and she makes sure that she is getting "more than the fair compensation" for what she is actually doing for the man, for his heart, and for other things.

A woman who is hosted by a man who is interested in her but who remains as close to all other men as to himself is clearly a bitch in this setup and I agree with Feynman that what she is doing isn't too ethical.

That was the quote with the word "bitch". The word "whore" appears in these lines:

“You got me to buy these sandwiches, and what am I going to get for it? Nothing!”


First of all, it's a part of the monologue that Feynman would use to pick the girls so you don't necessarily have to evaluate the truth value and morality of these sentences.

But if you do, I would argue that these sentences are true and based on respectable, internally consistent morality, too.

Truly consensual sex is assigning pretty much symmetric financial roles to the man and the woman. In the real world, it is often the case that the man is supposed to be more engaged, an asymmetry develops, and there are material (I mean financial) flows from him to her. If the flows get excessive, i.e. if a woman (or, much less frequently, a man) abuses her (or his) status of being desired, it's bad.

I am annoyed by Francis' (and many other PC ideologues') mud slinging against Feynman because it reminds me of the communists' rants against Havel, dissidents, and many others – and tons of analogous texts that the heirs of the communist ideology and methods were doing afterwords.

But what is also bad is that these criticisms invade Feynman's privacy and the privacy of those women, too. It's really not Francis' business to "charge" Feynman with something because he isn't a party to those events. If someone could have complained, it was the women. But I don't really think that any of the women had a reason to complain. After all, there must have been thousands of women who would later be very sorry that they didn't sleep with Richard Feynman. And if there are no plaintiffs, there should be no judges.

So I encourage Matthew Francis to exploit the remarkable opportunity to shut his dirty politically correct mouth up.
Luboš Motl v 6:06 PM
Share