The New York Times have published a relatively friendly story by Michael Wines about John Christy, a well-known climate skeptic:


Though Scorned by Colleagues, a Climate-Change Skeptic Is Unbowed


I say that the article is "relatively friendly" because it pictures Christy as a decent human being and an achieved enough expert while his opponents, the climate alarmists who have contaminated the community of atmospheric scientists, were shown as what they are, a cruel, fanatical, inhumane, Gestapo-like sect that won't even shake Christy's hand.

From an emotional viewpoint, they treat Christy well. However, as James Delingpole nicely discusses, there is some hidden negative message in the article because the author partly intends to legitimize the isolation of Christy in certain circles of his colleagues.


I have never changed my mind that in the long run, the New York Times is a politically centrist newspaper that rarely becomes a flagship of dishonesty and contemporary versions of fascism such as environmentalism and feminism. Well, one rarely gets aroused by their articles – just like one rarely gets aroused by other grey ladies – but I do think that the New York Times preserve a certain level of being fair.


Needless to say, the New York Times article got a worse rating from the true extremists in the debate. Lindsay Abrams, an assistant editor at Salon, responded with the rant


where she attacks John Christy and his science from all conceivable and inconceivable angles. I find the very concept that someone would allow someone like Lindsay Abrams to "rate" a scientist with thousands of citations absolutely surreal. It's surreal for numerous reasons – and one of them allows us to classify this article as just another example of feminism run amok.

Dear Lindsay, let me tell you something: if some people have been telling you that with your IQ, your understanding of science, or your scientific achievements, you may beat John Christy's left ring finger or his right testicle, for that matter, they have been deceiving you. Instead of attempting to join the climate debate, you should work hard and learn how to wash dishes because you don't have a clue.

Let me discuss the last paragraph of her rant:


Christy’s supporters are already up in arms about that one. But the comparison is apt, and it’s the reason why, even if history does turn out to vindicate Christy, he won’t be remembered as an anti-establishment hero. He’ll just be someone who, against all evidence to the contrary, got really, really lucky, and put not just a little girl, but the entire world at risk in the process.


That's just crazy. First of all, Christy isn't supposed to be an anti-establishment hero. From a comprehensive viewpoint, as a rather typical conservative scientist, he represents the establishment of the human civilization and it's the tree huggers, climate alarmists, proponents of carbon taxes, and similar crackpots including Lindsay Abrams who are fighting against the establishment, against the technological world, against progress, and against capitalism.

Second, it's nonsensical that when the climate apocalypse fails to materialize in the next 10, 20, 50, or 100 years, people will think that the Earth will just have been lucky. The atmospheric processes are affected by lots of chaotic, hardly predictable phenomena. On the other hand, many dynamical variables describing the atmosphere are intrinsically classical variables governed by nearly deterministic theories, up to some noise whose effect may be reduced by averaging. In a few decades, it will be possible to see not only that the climate apocalypse will have not materialized; but also that its probability to emerge as of 2014 (and calculated with the hindsight that people will acquire in the future) will have been virtually zero. 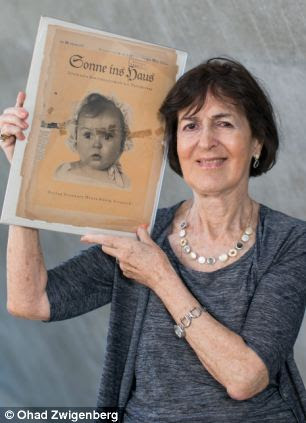 
It’s kind of like telling a little girl who’s trying to run across a busy street to catch a school bus to go for it, knowing there’s a substantial chance that she’ll be killed. She might make it. But it’s a big gamble to take.


Well, totalitarian movements have always loved to abuse children and adults' positive emotions towards children – and climate alarmism is obviously no exception, nothing that would deviate from the "textbooks of propaganda" used by the Nazis and similar folks. A few weeks ago, I was amused by the story about the perfect Aryan girl poster. The Nazi propaganda chose a girl to be the "sun in the house". Needless to say, she turned out to be Jewish. Click at the picture above to read the amusing story.

Kerry Emanuel's "metaphor" suggesting that to realize that climate alarmism is a pile of šit is on par with sending little girls to the cemetery may be seen as one that is beyond the pale. It's clearly nasty for Mr Emanuel to try to hurt the image of his climate skeptic colleagues in the eyes of the gullible people by this completely demagogic metaphor.

On the other hand, there is a sense in which the metaphor is fair and we should embrace it. If you describe the metaphor from the opposite perspective, it says:


Climate alarmism is like telling a little girl to stop attending the school because there's a substantial chance that she will be hit and killed by a school bus or another vehicle on the busy street over the years. Even without any education, she might grow into more than a cave woman and survive in the modern world for decades. But it's a big gamble to take.


The point is that individual people as well as nations and the mankind faces many risks that are "not strictly zero" but just because something can't be "completely rigorously proven to be impossible", we can't completely stop doing things that have some (probably small and hard to quantify) potential to increase the probability of the bad outcomes. It's like throwing the baby out with the bath water.

A girl may actually be hit and/or killed by a vehicle on the busy street and some girls indeed are but an average girl is still better off when she learns how to cross the busy street, how to use her eyes and the traffic lights to improve her safety, how to enter the school bus, and how to attend the school. Moreover, the car accident in front of a school bus while going to school is extremely far from being the only (or the dominant) cause of death – children may be killed by cars even when they don't attend schools and there are lots of other causes of death that are unrelated to traffic – and it is therefore irrational or demagogic to separate this threat from the context and to inflate it out of any sensible proportion.

Analogously, a "climate apocalypse" is extremely unlikely, CO2 changes its probability by a tiny and hard-to-quantify amount, and there are many other possible threats – as well as positive opportunities – to consider while making rational decisions. It would be just totally idiotic to stop or reduce an important part of the world's economy because one of the thousands of hypothetical threats may be argued to be "not strictly zero".

And be sure that to force the civilization to stop using fossil fuels would be at least as bad for the prosperity and happiness in the world as the decision to "leave the children behind" by abolishing schools. That's why I think that Kerry Emanuel's quote – even though it was meant to be a cheap Goebbels-style backstab to the climate skeptics' backs – is actually a decent metaphor and Emanuel and his fellow alarmist lunatics are fundamentally wrong about the sensible behavior in both examples and in many other situations, too.
Luboš Motl v 7:48 AM
Share