Since the beginning of this month, the ATLAS and CMS collaborations have reported several intriguing excesses such as the apparent enhancement of the \(W^+W^-\) cross section (which may be due to some large logarithms neglected by theorists, as a recent paper indicated), a flavor-violating Higgs decay, leptoquarks, and a higgsino excess, among others.

Bizarrely enough, all of us missed another, 2.8-sigma excess exactly one week ago:


The ordinary \(W^\pm\)-bosons only interact with the left-handed component of the electron, muon, and tau, because only those transform nontrivially (as a doublet) under the relevant \(SU(2)_W\) part of the electroweak gauge group.


However, there exist models of new physics where this left-right asymmetry is fundamentally "repaired" at higher energies – and its apparent breakdown at accessible energies is due to some spontaneous symmetry breaking.

In the search, one assumes that the \(W^\pm_R\) boson is created by the proton-proton collisions and decays\[

\] to a charged lepton and a (new) right-handed neutrino. The latter hypothetical particle is also in the multi-\({\rm TeV}\) range and it decays to another charged lepton along with a new but virtual (therefore the asterisk) \(W^\pm_R\) bosons, so the chain above continues as\[

\] where the final step indicates the decay of the virtual \(W_R^*\) boson to a quark-antiquark pair. Great. They have to look for events with two charged leptons and two jets.

So the CMS folks have made a search and wrote that there is nothing interesting to be seen over there. They may obliterate the proposals of new physics (of right-handed couplings of new gauge bosons) more lethally than anyone before them, they boast, and the exclusion zone for the \(W_R^\pm\) goes as high as \(3\TeV\). 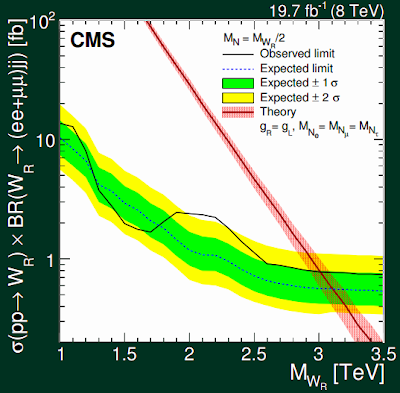 However, under this boasting about exclusion, there is a "detail" that isn't advertised too much. Look at the exclusion graph above. You must have seen many graphs of this kind. On the \(x\)-axis, you see a parameter labeling the hypothesis about new physics – in this case, it's the mass of the \(W^\pm_R\)-boson. The right-handed neutrino is assumed to have mass \(m_N=m_{W(R)}/2\).

On the \(y\)-axis, you see the number of \(\ell\ell q\bar q\) events that look like if they originated from the new particle decaying as indicated above. If there is no new physics, the expected or predicted number of events (the "background", i.e. boring events without new physics that imitate new physics) is captured by the dotted line plus minus the green and yellow (1-sigma and 2-sigma) band. The actual number of measured events is depicted by the full black line.

If there is no new physics, the wiggly black line is expected to fluctuate with the Brazil band 95% of the time. The red strip shows the prediction assuming that there is new physics – in this case, new \(W^\pm_R\)-bosons that are coupled as strongly as the known \(W_L^\pm\)-bosons.

This may be interpreted as a "near-certainty" that there are new \(W^\pm_R\)-bosons whose mass is about \(2.1\TeV\) or perhaps between \(1.9\TeV\) and \(2.4\TeV\). Well, I am of course joking about the "near-certainty" but still, this "near-certainty" is 86 times stronger than the strongest available "proofs" that global warming exists.

The CMS collaboration dismisses the excess because it is nowhere near the red curve. So it must be a fluke. Well, it may also be a sign of new physics – but a different kind of physics than what the search was assuming. It's actually easy to adjust the theory so that it does predict a signal of this sort. Somewhat lower (\(g_R=0.6 g_L\)) couplings of the right-handed bosons are enough to weaken the predicted signal.

In a new hep-ph paper today,


A Signal of Right-Handed Charged Gauge Bosons at the LHC?,

The asymmetry in the left-handed and right-handed coupling (note that they need a suppression \(0.6\) when going from the left to the right) may be achieved in "LRSM scenarios": the scalars charged under \(SU(2)_L\) have a different mass than those under \(SU(2)_R\), and the implied modifications of the RG running are enough to make the left-handed and right-handed couplings significantly different at low energies.

All these possibilities sound rather natural and Deppisch et al. are clearly excited about their proposal and think that it's the most promising potential signal of new physics at the LHC yet. I think that the probability is above 95% that this particular "signal" will go away but people who are interested in HEP experiments and phenomenology simply cannot and shouldn't ignore such news.
Luboš Motl v 8:14 AM
Share