It seems pretty obvious to me by now that the LHC experiments were publishing lots of papers where things look "clear" and nothing new is observed and they were increasingly scrutinizing and postponing the searches and surveys that are potentially "seeing something new". Just to be sure, one may feel uncomfortable about this bias because the message extracted from the papers published before a moment \(t\) is skewed. On the other hand, this bias is understandable because extraordinary claims deserve extraordinary care (and require extraordinary evidence). 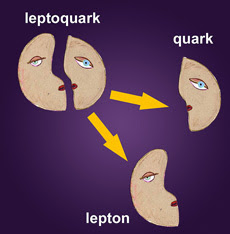 So one should arguably accept that it takes a longer time to complete papers with "positive claims" – and at the same moment, everyone should be aware of this bias and realize that the body of papers published up to an early enough moment looks more conservative than the actual evidence that the experimenters are probably seeing at that moment. You simply have to accept that the literature can't be mindlessly trusted as a faithful picture of "what science actually knows right now", and this bias is just one minor aspect of this disclaimer.

The avalanche of anomalies in new papers published since the early July 2014 seems too strong to me to consider this clustering a set of coincidences. Note that ATLAS has published a paper on the anomalously high \(W^+W^-\) cross section and CMS saw that an estimated 1% of Higgs decays go to \(\mu^\pm \tau^\mp\), a flavor-violating combination that should be nearly absent and where the excess is 2.5 sigma.


Today, the CMS released another paper with an anomaly, a paper on their search for leptoquarks:


Note that leptoquarks are (or would-be) speculative new particles that combine the charges of leptons as well as quarks. So a leptoquark carries (or, quite possibly, doesn't carry because it doesn't exist) a nonzero lepton number (like a lepton) and a nonzero baryon number (like a quark) and transforms as a color triplet (as a quark).


The particular leptoquarks searched for in this paper were spin-0 scalar particles. 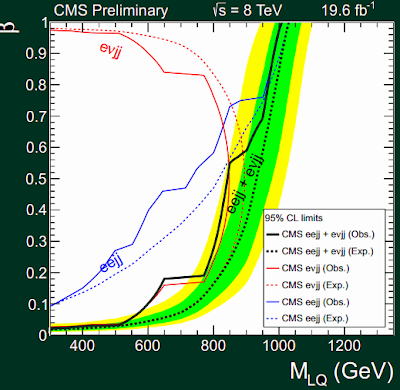 And this is the money graph.

As the picture at the top shows, the leptoquark (a single particle) is supposed to decay to a combination of lepton+quark. The decay necessarily exists because we don't observe any light and therefore stable leptoquarks; leptons and quarks have to be among the final products because of the lepton and baryon number conservation laws. The lepton may be either charged or neutral (neutrino). The percentage of the decays involving a (visible) charged lepton is known as \(\beta\) (which stands for "branching ratio").

Also, the shape is diluted – the excess exists for a wide range of leptoquark masses above \(300\GeV\), while a "real" leptoquark would be expected to produce a narrower excess as a function of the mass. In fact, you could be bothered even by the other 2-sigma excess for masses around \(850\GeV\).

Leptoquarks are in principle possible additions to the particle zoo, even according to some of the string vacua, but many people's (and my) knee-jerk reaction would be to say that they're bizarre and unmotivated. And they could cause lots of trouble. Of course that if this fluke turned out to be a signal, people would jump on this bizarre possibility rather quickly.

I would bet on a fluke but I am not really sure.
Luboš Motl v 7:01 PM
Share