LUX in South Dakota has totally changed the game 9 months ago and with its precise observations of nothing, it obliterated all the competing experiments that had claimed a signal. Those humiliated "Dark Matter Was Seen" experiments included DAMA, CDMS-Silicon, CoGeNT, and also... CRESST. It didn't become quite clear why they had seen something but with LUX's superiority, it was pretty much guaranteed that what they saw was a mirage i.e. an overlooked or poorly understood systematic effect or background. 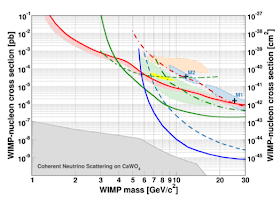 As Jester points out, CRESST is no longer an ally and became a LUX-led axis member, too. Incidentally, the LUX experiment itself will be replaced by its king-sized cousin, LUX-ZEPLIN.


In the new paper


they "do not confirm" their previous claims of a signal.


Instead, in the absence of deviations from the background, they impose upper limits and they are summarized by the red line on the graph above. Note that this red line destroys a new region of the parameter space, especially for the WIMP masses below \(3\GeV\) or so – their exclusion actually affects hypothetical particles as light as \(1\GeV\). In this category, CRESST is becoming a leader (boasting the stringest exclusion). This leadership in the low-mass discipline was possible by their usages of \({\rm CaWO}_4\) crystals; it's the oxygen nuclei that make the difference.

I think that virtually no one is really betting on the resurrection of these strong signals from unexpectedly light WIMPs these days. It's possible that other experiments won't try too hard to find or confirm a signal, and they will find out that it's easier to confirm LUX and perhaps to extend its negative results.

Just to be sure, there are lots of other places in the parameter space(s) where the dark matter in general and WIMP in particular may be hiding and it probably is.

By the way, two Florida physicists argue that the right theoretical prediction for the \(W^+W^-\) cross section is higher than previously thought, due to the contribution of "large logarithms" (related to mutually very different jets) that have to be resummed and that are probably overlooked by the Monte Carlo methods. With these large logarithms resummed, they claim a good agreement between the theory and the observations – so the \(W^+W^-\) excess would go away if they are right.
Luboš Motl v 7:07 AM
Share