Identical electrons in a nose you touched


Can you touch your nose?


that partially answers this would-be deep question by philosophers.

You know, you never really touch your nose because there remains a gap between your hand and your nose. The atoms and electrons repel. The German author correctly says that the Pauli exclusion principle preventing two electrons from being in "exactly the same state" is actually more important for the "impenetrability of matter law" than the Coulomb repulsion. She also correctly discusses that the definition of "you" may be subtle. The electrons and even atoms are constantly leaving and re-entering your body. As Feynman would say, "you" is really the approximate pattern that the particles love to recreate and the approximate dance that they like to dance, not a particular collection of particles.

Also, there may be sparks. When you're tickled by static electricity, you acquire at least several microcoulombs or so which translates to trillions of electrons. Lots of electrons are moving from one surface to another.


But now. I want to discuss whether the electrons are being exchanged in the case that there is no electric spark and the surfaces are exactly electrically neutral and the number of electrons on both surfaces just stays the same.


In classical physics, you could say either "Yes" or "No" – you just trace their trajectories.

But in quantum mechanics, electrons are mutually indistinguishable. They obey the Fermi-Dirac statistics. This is not an "extra subtlety" that you must add to the question whether you may touch your nose. It's actually the same question – the indistinguishability of electrons is actually a necessary condition for the Pauli exclusion principle to hold. It's necessary for the matter to be impenetrable! 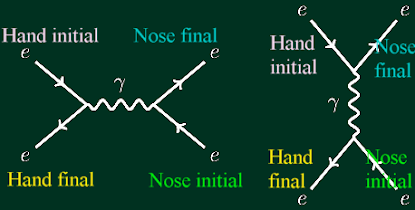 The \(t\)-channel and \(u\)-channel diagrams for electron-electron repulsion/scattering differ by the exchange of the final (or initial) electrons.

Consider this pair of diagrams. The left picture shows the "simple" history of two electrons. One is in your hand, one is in your nose. In the initial state, they're depicted by the lines entering from the left upper corner and from the right lower corner, respectively.

But there is another diagram, the right part of the picture above.

But quantum mechanics is different and heavily restricts what God may do – and orders Him what He has to do, too (e.g. He is obliged to throw dice).

In quantum mechanics, both histories must actually be summed before you produce any physical predictions. The two parts of the picture above are known as "Feynman diagrams" and they represent different intermediate histories. If you want to calculate the probability that two electrons would be observed in two particular states in the final situation, you first have to sum two complex probability amplitudes\[

\] (both terms depend on the final state whose probability you calculate, but I didn't want to make the equation messy) and then you may calculate the probability as some\[

In fact, if you fix e.g. the four momentum vectors of the initial and final states of the two electrons, the Fermi-Dirac statistics implies that the two contributions to the total amplitude, \(c_\text{no exchange}\) and \(c_\text{exchange}\), will have the opposite sign, at least if the final momenta of the two electrons are nearby.

If the final momenta of the two electrons (the whole state) were chosen to be equal, the two contributions would actually exactly cancel because they have the minus sign from the Fermi-Dirac statistics; and the absolute values would match. So the two diagrams would exactly cancel and you would get \(c_{\rm total}=0\).

That is the actual reason (presented in the path integral formalism) why you can't ever bring two electrons into the same state!

People who have a problem with the fact that quantum mechanics made it nonsensical to talk about "objective properties of the intermediate states" in an evolution – even though it was fully sensible in classical physics – think that this novelty of quantum mechanics is an optional luxury that may be questioned, obscured, "interpreted", or even denied.

But it isn't really true.

Even as obvious observations as the fact that your hand and your nose are "mutually impenetrable" existentially depends on the fact that the correct probabilities are obtained from the summation of two qualitatively different histories – in one history, the two electrons were not exchanged while in the other history, they were exchanged.

If someone (a bigot unable to say good-bye to classical physics) tells you that the questions such as "have the two electrons been interchanged during the history?" must have a clear answer, it's enough to touch your nose to prove him wrong. The fact that your hand stops when it reaches the nose and doesn't penetrate the nose is due to the fact that both conceivable histories contributed to the outcome of the experiment. In fact, the absolute values of their contributions were pretty much equal for the nearby electrons because it's the two diagrams' exact cancellation that prevents electrons from being in the same state! So not only the "electrons' history without exchange" and "electron's history with exchange" have nonzero contributions to the events; their share is 50% – 50%.

Amy made a relevant experiment at 0:50 of the video above. I recommend you to perform the same experiment with the anti-quantum bigots, too. But be careful to avoid the innocent victims!

P.S. My argument was in terms of Feynman's path-integral formulation of quantum mechanics. Someone could suggest that the need to "equally represent" the exchanging and non-exchanging histories is an artifact of Feynman's approach. But it's not. In the operator formalism, the wave functions have to be antisymmetric. The position-based basis vectors of the physical Hilbert space of two electrons are\[

\] which means that a sudden \(\vec x_1\leftrightarrow\vec x_2\) exchange of the two electrons changes the wave function at all (except for the overall sign or phase, perhaps). In other words, there is no way to decide whether a final state \(\ket{\vec x_{1,f}, \vec x_{2,f}}\) evolved from a particular initial state or its version with the permutation of the two electrons as long as the electrons came close to each other. Of course that the "relative weight of the two histories" is a concept that is only well-defined in Feynman's approach but the analogous wisdom that the permuted and non-permuted state vectors are equally important is valid in other pictures of quantum mechanics, too.
Luboš Motl v 9:42 AM
Share