Isn't Higgs a sneutrino dressed as a man?

Related LHC news: Both ATLAS and CMS released lots of new papers and preprints today. Perhaps most interestingly, ATLAS' measurement of the WW cross section still shows a uniform 2-sigmish excess in all channels after the 20/fb of the 2012 data which keeps the idea of light stops alive. Note that the paper is based on a set of collisions that is disjoint from the previous collisions that also showed an excess. In another ATLAS paper on \(t\bar t\), Monte Carlo models underestimate multijet events (another excess). Also, CMS is seeing a non-signal-like 2.6-sigma (locally) excess in the search for a sub-200-GeV higgsino, in the 30-90 GeV transverse energy channel of trileptons and tetraleptons. It really does seem like the interesting, non-SM-like LHC papers were being delayed.


Carla Biggio wrote a serious paper about a question that is so playful and ambitious that it may look silly to most particle physicists:


Is the standard model scalar the first discovered SUSY particle?


Supersymmetry predicts the doubling of the spectrum of all particles. Each fermion has a bosonic superpartner and vice versa. The traditional lore is that all the "old" particles that have to exist even without SUSY have been seen, while exactly the new particles predicted by SUSY (the superpartners) haven't been seen. 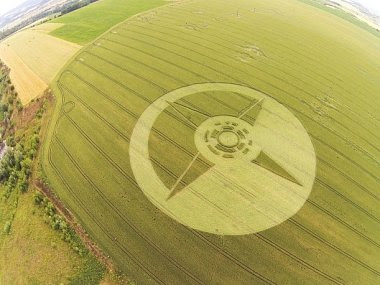 A new pictogram near Boskovice. Police isn't brave enough to accuse the extraterestrial aliens yet (especially because they seem to be NATO members) but hundreds of tourists probably beg to differ. ;-)

But isn't it possible that we have already seen a superpartner? Can't two of the particle species that experimenters already know be superpartners of each other? Let's look at all the possible combinations.


First, we can't have seen the superpartner of the graviton, the gravitino, because its spin is \(j=3/2\) and we haven't seen such an elementary particle yet. That was easy.

In particular, they transform as doublets under the electroweak \(SU(2)\) while the gauge bosons have to transform as a triplet. The quarks transform as triplets under \(SU(3)\) while the gluons form an octet. At most, the hypercharge \(U(1)\) gauge boson, the \(B^0\)-boson, could be the superpartner of another "complete singlet". But the only singlets we have really seen, the left-handed charged leptons, are charged so they can't be a superpartner of the neutral \(B^0\)-boson.

The Higgs boson transforms as a doublet, carries no color, and one of the components of the Higgs doublet is electrically neutral which fixes the hypercharge. Yes, it's the same arrangement as the lepton doublets.

The Higgs boson could be the sneutrino while the remaining eaten Goldstone bosons in the Higgs doublets could include charged sleptons etc.

For you to train the "-ino" suffix, you may listen to this song "Beautiful World" by the Bambini di Praga. How many people understand their English? It sounds Korean to me! ;-) But why an English-titled song by an Italian-styled Czech choir would be Korean is beyond me. Probably because they performed it in Korea LOL.

So can the relatively heavy \(125.7\GeV\) Higgs boson we know be nothing else than the superpartner of the light, nearly invisible neutrino? Probably the tau-like neutrino?

Well, there's one obvious sacrifice we have to make. The lightest superpartner is often assumed to be the dark matter particle. Such a particle is stable due to the conservation of R-parity. The R-parity should be \(+1\) for all the known particles and \(-1\) for all the others.

It seems that the R-parity has to be broken or non-existent. The supersymmetric model building of this form may lose a dark matter candidate – I think that this issue isn't discussed by Biggio – and the broken discrete symmetry may guarantee a lethal rapid proton decay as well as huge neutrino masses.

Biggio proposes a solution to these problems. Instead of a \(\ZZ_2\) R-parity group, she proposes a whole new \(U(1)_R\) continuous R-symmetry. She seems to assign nonzero R-charges even to things like the gauge bosons. I have no idea how it may work because it's so easy to produce another gauge boson (e.g. a photon) out of nothing.

At any rate, if she knows what she's doing, there is a reason why this may work and she concludes that such models are viable. Third-generation sfermions like the stop and sbottom are expected to be light in the model. The model itself seems to be even "more minimal" than the minimal supersymmetric standard model. Because I don't understand why the nonzero R-charges are OK, I would currently bet against this cute possibility.
Luboš Motl v 1:00 PM
Share