Taxes are a form of institutionalized theft. When they get too high, subjectively or objectively, successful people start to escape – covertly or overtly – the nation that is stealing in this way. That's why Depardieu became a Russian chap. 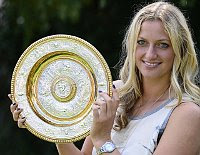 Czech tennis players (plus some other athletes) generally employ their residence in Monaco to get rid of their Czech taxes. It is totally legal and understandable. Our best female tennis player is open and honest about it and I appreciate it. Needless to say, if I could legally save millions in this way (and if I found the amount of paperwork "doable"), I would do the same.

Yesterday, a socialist lawmaker named Stanislav Huml (formerly a politician for Public Affairs VV; during communism, he was a communist party member and a cop; in 2006, he was running for a Eurofanatical party; in 2011, he switched to Jana Bobošíková's strongly Euroskeptical party for a while – quite a record) ignited a tax haven storm; see e.g. Radio Prague or Mid Day or others in English (or hundreds of Czech media sources).


On his Facebook account, he reposted a message by a Prague communist classifying the fresh Wimbledon winner Ms Petra Kvitová as "dirt" and demanded that she would be stripped of her Czech citizenship.


Most Czechs who matter find his position to be a self-evident symptom of jealousy and attempts to impress the jealous people. I also know some people who endorse these claims but I don't want to say who they are because I believe they should be deeply ashamed of such attitudes.

(Thank God, President Zeman disagrees with Huml's thoughts and says that no one can prevent her from paying lower taxes in Monaco. That's the kind of situations because of which I have voted for Zeman.)

There are at least 10 dimensions (yes, this is a string theory blog) to explain why I find these "demands" and the propaganda surrounding them stunning.

First of all, Petra is acting in agreement with the law. If we accept the rule of law, it's really unacceptable to justify the harassment of citizens by would-be "sins" that are not sins according to the law at all.

Second of all, pretty much everyone would do the same if he or she were in a similar situation and if he or she could. In fact, Petra is much more modest and immaterial than most people; she is also honest when she reveals her thinking.

Third of all, Czechia (and most other nations) really can't afford to change the law and prohibit similar clever improvements of the residence because the Czech citizenship isn't that infinitely attractive and we could start to lose successful people en masse. It's good that different countries may choose their own tax rates. We depend on our rate's being lower than other countries' rate, too. At the end, countries compete and the country that is able to offer a lower tax rate is unsurprisingly attracting rich residents. If we got rid of Mr Huml and thousands of his copies, we could perhaps beat Monaco and attract similar people ourselves.

Fourth of all, Petra's integrated income ($15+ million or so) occurred because of her talent and her hard work, something that the Czech society doesn't really have anything to do with.


Former Prague Communist Daniel Rovný said: "Petra, you are an excellent tennis player, but as a person, you are trash. You trained at the sports facilities built from the taxes of the poor, but you avoid paying taxes as a rich person," he added.


Bullšit. Petra's journey to the top tier of the world tennis didn't really depend on things paid from taxes and surely not the taxes paid from the poor who only pay a tiny fraction of the total taxes, anyway.

Fifth of all, the money from the tournaments were mostly provided by foreigners not unsimilar to those who live in Monaco, not by the Czech Republic or Czech subjects, so it's natural if she returns a fraction of that money to similar foreigners, too.

Sixth of all, even though it was the foreigners who have paid most of her tournament money, it's really the Czech public for which Petra has done the greatest service by elevating the respectability of our nation and by bringing us exciting moments in front of TVs – with some happy ends. So the Czech people – or the Czech Republic as a country – should really pay her some extra money if things were fair.

Seventh of all, it's stunning that such claims about "dirt" are being said by folks like Huml (or his communist comrade) whose whole income completely depends on their being full-fledged parasites who are getting twice the average salary just by licking the asses of the bottom of the Czech society, the evil jealous scum that votes for left-wing parties. On the other hand, Petra has earned all her money for exceptional and hard work.

Eighth of all, stripping her of her Czech citizenship would be no good for Czechia and the Czech nation because we wouldn't get any money from that, anyway, and our image and respectability would worsen, too. When Martina Navrátilová or Ivan Lendl became U.S. citizens, they couldn't quite rewrite the history and erase their obvious links with us. But we could still "take credit" for a much smaller portion of their successes than before they emigrated.

Nineth, because it's self-evident that she has earned her money legally and she still faces a hateful backlash, it's quite powerful circumstantial evidence that other cases in which various rich people are harassed, investigated, and not nicely talked about for alleged corruption and other economic crimes is comparably indefensible – games played for the jealous šitty loser class within the Czech nation.

Tenth of all, Mr Huml is a Neanderthal who was brought here – as all children of the 1970s know very well – by Mr Mach [Makh] and Miss Šebestová [Sheh-beh-staw-vahah], two schoolkids, from the ice age.

He was sleeping with a mammoth in a hole and used to eat mammoths with dill. Check the photograph to confirm that it's him. I hope that Mach and Šebestová will bring him back to the ice age because the ice age is the ice age but our epoch, and the year 2014, takes place in an interglacial where we simply have no room for similar Neanderthals and other jealous hateful parasitic populist scum.

Aside from 4 top Czech tennis players, Novak Djokovič "lives" in Monaco, too. It's generally assumed that if someone proposed to strip him of his Serbian citizenship, such a proponent would be dead by the evening.
Luboš Motl v 2:15 PM
Share