RAF has told us about a new quant-ph preprint


The quantum pigeonhole principle and the nature of quantum correlations 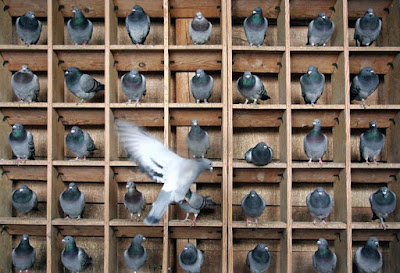 But is that statement right quantum mechanically? The authors claim that the seemingly obvious proposition isn't right which is why quantum mechanics assaults the "very core" of what numbers are and all the mathematics – lots of big words.

One must avoid prejudices. The technical claim in the paper may be right or wrong, and they may either say that they have found a problem with quantum mechanics (like hundreds of cranks love to claim these days) or not (just another example of the failures of the common sense). Which option is right?


First of all, one must understand the precise technical interpretation of the proposition "two pigeons are in the same pigeonhole", and so on. But informally, if you only look at the original slogan about the three pigeons, it is absolutely clear that the slogan holds quantum mechanically, too. After all, as my words below showed, it's nothing else than the reason why lithium, an atom with three electrons, cannot place all of its three electrons in a \(1s\) shell. There are only two pigeonholes in that shell!


So the claim actually holds both in classical physics and quantum mechanics when interpreted correctly.

All of chemistry – an application of atomic physics (quantum theory of atoms) – is based on the fact that the claim continues to hold in quantum mechanics and it's actually more important than it ever was in classical physics – because classical physics, due to its unavoidably continuous nature (and lack of discrete spectra) has never allowed us to discuss nice, sharply separated pigeonholes (discrete states for particles).

So what are they doing so that they end up claiming that the apparent tautology is violated in quantum mechanics? Consider three particles or pigeons with labels \(1,2,3\) that are prepared in the following unentangled (=simple factorized tensor product) state\[

\] where each of the three tensor factors is a simple superposition of the particle's being in the "left pigeonhole" (L) and the "right pigeonhole" (R):\[

\] They also told us that by the condition "pigeons 1,2 are in the same pigeonhole", they mean the simple pigeonholes L and R.

The problem with the paper is that the initial state and the definition of the observables we are going to measure already tell us everything we need to know to calculate the probability that a pair of pigeons ends up in different pigeonholes. And let me tell you in advance that the probability that each of the three pairs \(12,23,31\) is found in different pigeonholes is zero, in agreement with the classical intuition.

How do we prove that? Define the operator that answers the question "are pigeons \(1,2\) found in two different pigeonholes?" By cyclical permutations, analogous operators may be written down for the pairs \(1,3\) and \(2,3\). For \(1,2\), we have the projection operator\[

\] It's simple: we are projecting to the subspace spanned by the basis \(\ket{LR}\) and \(\ket{RL}\). The operator above is a Hermitian projection operator. Its eigenvalues \(0\) and \(1\) correspond to the answers (to the aforementioned question) "No" and "Yes", respectively. If you aren't looking for a linear Hermitian projection operator whenever you are thinking about any "Yes/No" question about a physical system, then you haven't started to think quantum mechanically yet.

If you look carefully, you will see that in the paper, the equation 5b is screwed up. In all the bra vectors, the labels \(L\) and \(R\) are interchanged relatively to the correct form. We are talking about two pigeons' being in different holes but the pairing to \(L1,R2\) or \(L2,R1\) must still be the same for ket vectors and bra vectors! (The errors probably occurred because they began to write the subscripts on the left side and got confused by them.)

But OK. They don't use this invalid formula, anyway. Instead, they also define the corresponding operator for the question "are \(1,2\) in the same pigeonhole?" which is obviously just "one minus the operator above", or, equivalently\[

\] You should check whether the three operators \(\Pi_{i,j}^{\rm same}\) for \(ij=12,23,31\) commute with each other. This is an important thing to check because non-commuting observables cannot be measured simultaneously. The paper is completely sloppy about all such things – in fact, you won't find the word "commute" in the paper at all!

The operators \(\Pi_{i,j}^{\rm same}\) (and "diff") commute with each other for a simple reason: all of them are diagonal in the basis containing vectors \(\ket{LLL},\ket{LLR}\), and six more vectors like that. And diagonal (in the same basis) operators simply commute with each other. You may prove the vanishing commutator in many other ways, too.

The correct claim that the operators \(\Pi_{i,j}^{\rm same}\) commute with each other was included in the first version of this blog post. In the second, revised version that was posted for a few minutes, I mixed the operators with other, seemingly "similar" but ultimately different projection operators "capital upsilon"\[

Because these projection operators don't commute, the triple product \(\Upsilon_{12}^{\rm same}\Upsilon_{23}^{\rm same}\Upsilon_{31}^{\rm same}\) isn't the right operator for the hypothetical "combined" question. It actually isn't a projection operator; and it isn't necessarily Hermitian, either. So this is would be a wrong way to operationally define the question whether each pair of pigeons occupies different pigeonholes (or a similar question with \(\Pi\) replaced by \(\Upsilon\)). If you measure the three pairs one by one, the three measurements just won't commute with each other, so you can't interpret the result of the second and third measurement as telling you something about the initial state before the first measurement!

But back to the \(\Pi\) operators. With these operators, the triple product \(\Pi_{\rm paradox}\) defined above is identically equal to zero. Like the three individual \(\Pi\) operators, their product is diagonal in the basis \(\ket{LLL},\ket{LLR},\dots ,\ket{RRR}\). That's why the three qubits behave as three classical bits and you may see that each of the eight diagonal elements is zero as well. They're zero for the usual classical reason. There is no basis vector among these eight – an arrangement of three letters L/R – that would guarantee that each pair of the letters among the three are two different letters. ;-)

So in contrast with the claim of the paper, the paradoxical situation proposed by Aharonov et al. has a vanishing probability to occur, regardless of the initial state. The paradox is impossible!

There are lots of valid operators to measure. For example, you may define the number operators \(N_L,N_R\) for the number of pigeons in the left and right pigeonhole, respectively. On this 8-dimensional Hilbert space, they will identically obey \(N_L+N_R=3\) which is why they obviously commute with one another, too. This isn't directly relevant for the question whether "each pair is in different pigeonholes".

You may also try to construct the Hermitian projection operator expressing the possibility that "each of the three pairs is found in different pigeonholes". If you construct it as a sum of simple projection operators on the subspaces spanned by \(\ket{LLL}\) or its 7 counterparts, you will find out that none of these eight basis vectors really obeys the condition, so none of the corresponding projection operators will be added to yours. Your operator corresponding to the paradox will therefore obey \(\Pi_{\rm paradox}=0\) identically. The paradox cannot occur.

There is another way to mathematically express the fact that the paradox cannot occur. If there were a state in which all the three pairs \(12,23,31\) are found in different (\(L\) vs \(R\)) pigeonholes, such a state \(\ket\Phi\) would have to be a tensor product of a Bell-like state for \(1,2\) and a state for the third pigeon, but it would have to admit two similar tensor decompositions related to the first one by cyclic permutations. No such (nonzero) state exists. This claim is really equivalent to the widely discussed (in the quantum gravity community) "monogamy of entanglement". In this sense, the well-known principle of "monogamy of entanglement" is what shows that they are wrong when they claim that the paradox may occur.

Measuring something else than what you measured

Just like in all the textbook situations of quantum mechanics, the operators also refuse to commute with each other, i.e. \(\Pi_{1,2}^{\rm same}\) doesn't commute with the projection operator on \(\ket{+i}_1\) for the first particle,\[

\] just check it, so the measurements of the \(\pm i\) qubits for the three particles modify the values of the observables \(\Pi_{i,j}^{\rm same}\). They modify the answer to the question whether a pair of pigeons is in the same state. It's exactly the same principle as the fact that the measurement of the position inevitably modifies the momentum and vice versa.

So if pigeons 1,2 are found in different pigeonholes after you measured their \(\pm i\) qubit, it may be a consequence of the \(\pm i\) measurement (and its unavoidable effect on the system), not a property of the initial state.

To make things really hopeless, they also talk about "post-selected" states but they're actually different states than the states you get by the projection corresponding to the measurement you just did!

Undergraduate students who would write such a preprint as their term paper should get an F. It's a pile of hopeless rubbish showing that they have misunderstood pretty much all the basic principles of quantum mechanics, especially the fact that any measurement – any procedure that finds some nontrivial information about any physical system – inevitably modifies the state of the physical system (and in particular, changes the distribution of all observables that don't commute with the just measured one).

Note that this mistaken opinion that you may circumvent the uncerttainty principle – to find a value of a measurable without appreciating that this "finding out" (=measurement) generally changes the state and the distribution of other observables not commuting with the just measured one – is also hiding in the foundations of the "weak measurement" pseudoscience. And yes, Aharonov has been writing "influential" papers about that rubbish, too. The fresh new paper doesn't use the term "weak measurement" at all but the elementary misconceptions behind this paper and the "weak measurement" papers are pretty much isomorphic.

I hope that the text above has also answered the question whether it's possible to distribute three big pigeonholes into the brains of six physicists so that the paper that they write together is as brainless as a paper written by one physicist with one big pigeonhole in his skull. The answer is Yes.
Luboš Motl v 4:45 PM
Share