There were virtually no deviations of the LHC from the Standard Model a month ago. But during the last month, there has been an explosion of so far small excesses.


One day after Tommaso Dorigo presented another failed attempt to mock the supersymmetric phenomenologists, he was forced to admit that "his" own CMS collaboration has found another intriguing excess – namely in the search for edge effects in dilepton events.

The detailed data may be seen in Konstantinos Theofilatos' slides shown at ICNFP2014 in Κολυμβάρι, Greece (if the city name sounds Greek to you, it's Kolimvari; Czech readers may call the place Kolín-Vary) or at a CMS website. The paper hasn't been released yet but it's already cited in the thesis by Marco-Andrea Buchmann (no idea about his or her sex but he or she looks like a boy) whose chapter 5 (page 49) is dedicated to this search (see also the reference [95] over there). On page ii, Buchmann mentions significance of the edge at 2.96, almost 3 sigma.


Supersymmetry is expected to preserve, at least approximately, the multiplicative conservation law for the R-parity. The known Standard Model particles have the positive R-parity; their elusive superpartners have the negative R-parity. We collide known and boring protons only so the initial R-parity is positive (even). So if superpartners are produced, they have to be produced in pairs.


Each of the superpartners may decay and the process of decay may have several steps. Either missing energy (neutrinos or, at the end, the lightest superpartner) are released, or charged leptons. Charged leptons are "clean" and not too contaminated by the hadronic junk that the LHC constantly produces in the proton-proton collisions.

In the decay chain, two charged leptons, e.g. one \(e^\pm\) and one \(\mu^\pm\), may be released as a superpartner decays to lighter superpartners via the chain \[

The reason why this is really the maximum invariant mass of the charged leptons is that it is clearly achieved if the two leptons' momenta are parallel in the spacetime, along with everything else. If they are not parallel, the invariant mass is lower than it could be.

So the dileptons resulting from the decay of the superpartner \(X\) with the invariant mass \(m_{\rm inv}(e^\pm \mu^\pm)\) above a threshold (edge) don't exist at all. On the other hand, lots of dilepton events are predicted "right beneath" the edge because they correspond to relatively slowly moving leptons and there's a lot of phase space over there because the invariant mass only depends slowly on the speeds if the speeds are low. 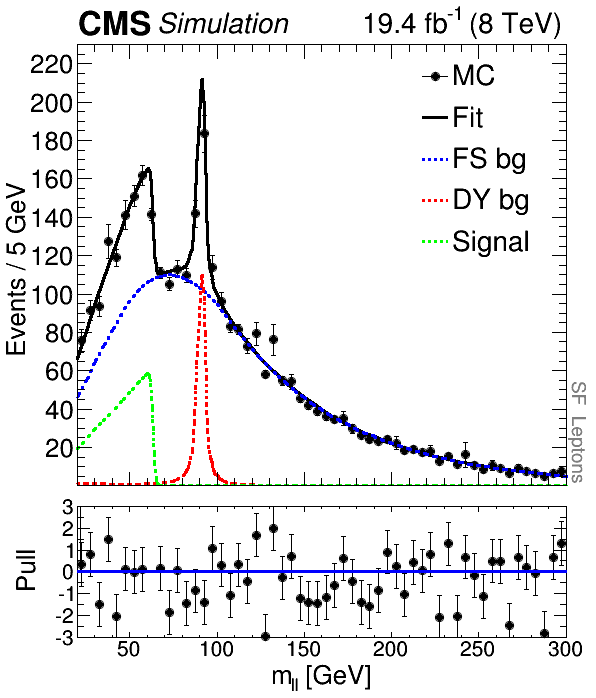 The chart was produced by a computer simulation. The green dotted curve shows the shape of the expected edge at \(m_{\rm inv}=65\GeV\) and you may see that the shape is matched by the observed (but simulated) events, the black curve.

The actual observed curves from CMS look much less spectacular, 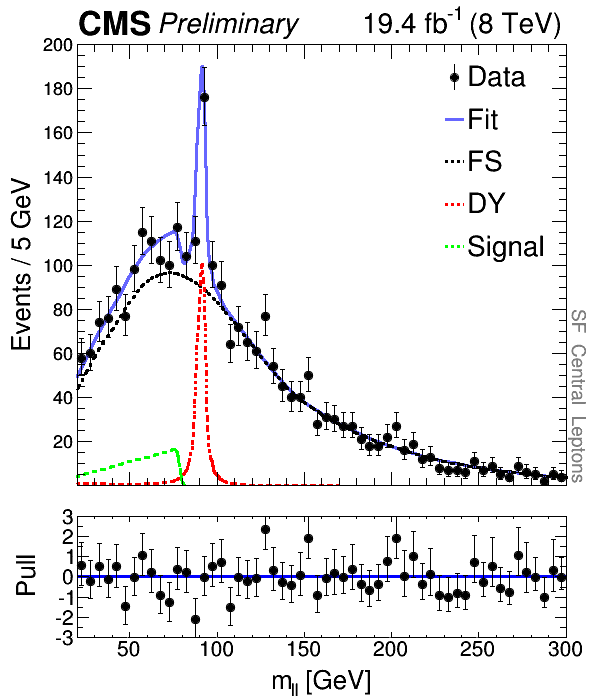 but the mild edge located at \(m_{\rm inv} = 78.7\pm 1.4\GeV\) (Buchmann's thesis) was actually quantified to have significance 2.6 (the Greek guy) or 2.96 (Buchmann) sigma, formally corresponding to something like 99% or 99.7% certainty that new physics is there. Of course, a 99% certainty is nothing convincing in particle physics and most things one may be 99% certain about are almost certainly flukes or errors.

(The reason of the discrepancy is really the same as the reason why the sleeping beauty knows that the probability of "tails" is still \(P=1/2\). She wakes up after "heads" twice as often but she knows that; she knows that the heads – and similarly excesses at the LHC – are "overreported". So if she wants to have an idea about about the actual probability of the new physics or heads, she must correct her estimates for this overreporting. When she does so, she knows that heads still have \(P=1/2\), less than the naive \(P=2/3\), and new physics given the excess is much less likely than the formally calculated and often incorrectly interpreted 99%.)

But it's surely another fluctuation that can keep one excited.

If you have been searching for masses in \({\rm GeV}\) in this blog post, you must have seen that the relevant edge was at \(78.7\GeV\) or so. If superpartners exist, this value could be the mass difference between two superpartners (or other new particles?) waiting to be discovered.
Luboš Motl v 8:56 AM
Share