Finally, one may see some exciting realtime pictures on the global wind map (click here to get the interactive app; TRF instructions are available, too). 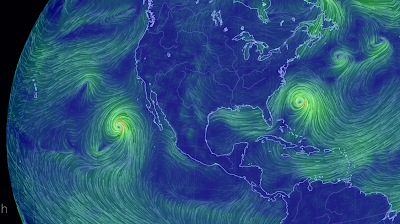 Yes, the hurricane approaching the Bermudas (East of Florida) is called Cristobal. The Pacific hurricane West of California is called Marie.


By clicking around, I was only able to find a spot with 83 km/h in Cristobal while the same number I achieved inside Marie after a minute was 91 km/h. Marie is a stronger, more destructive hurricane because she is female.


Look how boring the hurricanes look on the U.S. National Hurricane Center website.

Meanwhile, it looks like the summer is really over in the Czech Republic – August 2014 has basically been an autumn month. We're not the only ones who have been robbed of summer by the global warming. A simple search for record cold temperatures shows that in recent days and weeks, they measured the record-breaking low temperatures in Ireland, Toronto, Death Valley, and elsewhere.

Weather.com says that the August was one of the coldest ones in Europe in decades.

Years ago, I would write blog posts about the weather – and record cold temperatures – more frequently. I got bored by that because they're occurring at a rather ordinary frequency we have known for decades. In the U.S., most threads discussing weather (and "relatively extreme" weather) receive comments about global warming. I must say that among hundreds of comments under Czech articles about cold weather, there usually isn't a single comment that would refer to the climate change or global warming confrontation. This piece of ludicrous propaganda is a non-issue in Czechia and I am sort of happy about that.
Luboš Motl v 11:29 AM
Share