CSTO ready to take over Ukraine

I've spent lots of hours by following the events in Ukraine and worrying about them, too. The Western propagandist outlets have informed their undemanding audiences that Russia has finally invaded Ukraine. Well, it wasn't the first time when we heard such a thing. What strategy did Russia choose to invade Ukraine yesterday? 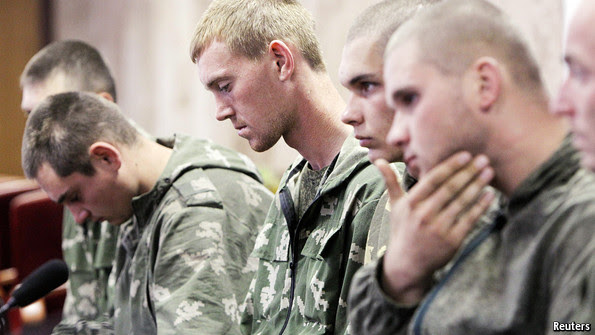 It has sent about 10 soldiers above. They must have supernatural powers if they're supposed to conquer a country with 40+ million people. Perhaps, it wasn't just the ten folks. There may be a thousand of Russian citizens fighting over there. Soldiers on vacations, retired soldiers, and perhaps other volunteers. What a shock. Do you really expect the Kremlin to exterminate people in their military for these hobbies? The Kremlin understands the emotions behind these hobbies. There is a comparable number of Americans (or at least one hundred) on the other side – who have really no business to be there at all – too.


Some Canadian NATO apparatchiks tried to be both funny and cheeky so they have drawn a map for the captured Russian soldiers (and their colleagues) to find their way.

Geography can be tough, indeed. One may immediately see three problems with the map.
Concerning the third point, the name "Ukraine" has been used for that territory for quite some time. But if the Canadian would-be comedians insist on using an alternative name that has "Russia" in it, the right name is not "Not Russia" just like this guy's name isn't Mr Not Sure. At least since the 1335 Byzantine documents at least through the 1980s, the alternative name of the territory was "Little Russia". Tchaikovsky wrote a famous Little Russian Symphony, inspired by the folk songs from that region – "Ukrainian folk songs", some people would call them today.

In earlier times, the "Kievan Rus'" was covering pretty much the same territory. But if you realistically incorporated Crimea, fixed the Kaliningrad blunder, and used a name for Ukraine that would reveal that it is a part of the Russian civilizational space, it would no longer be "funny", would it? Here, the word "funny" in quotation marks means "to be capable of flattering the cheap Russophobia of the lowest, brainwashed layers of the Western society". If something is full of xenophobia directed in the "right", politically correct direction, it must be "funny" as well, right? I don't find the map funny without quotation marks, especially if I compare it e.g. with this map of the world according to the Americans:

Incidentally, the Canadian chaps may want to look at this map, too, in order to calibrate their idea about their own relevance in the world.

At any rate, it is flabbergasting how much nonsense, fabrications, conspiracy theories, and downright lies are being shown in the Western "mainstream" media these days. A week ago or so, I don't remember exactly, we would be told about an invasion by Russian tanks. Within a day, it would be shown that the tanks have been Ukrainian for years. No corrections would ever be published in the "mainstream" media.

When MH17 was shot down, we would be made sure that Russia or at least the Russian speakers were behind it. However, this topic suddenly evaporated – probably because the investigation hasn't led to the "desired" results, has it?

Also, we are constantly fed the preposterous propaganda that the Kiev regime is already approaching the "final victory". This propaganda is almost identical to the propaganda in the Third Reich while it was losing its first battles with the Soviet Union. Whenever the "advances" stop or are reverted, people are being fed hysterical conspiracy theories claiming that the latest local militias' successes are due to the evil Russian Federation.

Russia, the Russian people, and the Russian politicians are being constantly spitted upon, criticized for their interactions with the Russian speakers in Ukraine as well as for the lack of interactions with the Russian speakers in Ukraine, and blamed for all results of the current Western leaders' stupidity, inconsistency, and immorality. It is only going to be fair if Russia ultimately does something it has been accused of for such a long time, e.g. to take over Ukraine. The CSTO, a six-country military bloc around Russia, is ready to send peacekeepers to Ukraine once all the member states agree with the operation.

Meanwhile, Barack Obama and others continue to spread some unbelievable lies about Russia's responsibility for the 2,500+ casualties of the conflict. Russia hasn't done a damn thing to threaten lots of lives in Ukraine. Those whose memory is better than the memory of a piece of šit know very well that it was also the Western politicians who were encouraging the violent coup in Kiev since November 2013, who were spitting on the legitimate president Yanukovitch who was only using rubber bullets, and so on. The spark of this dissatisfaction was Yanukovitch's totally legitimate decision to veto a (lousy) treaty with Brussels. Now, the unelected Obama-backed fascist junta along with a semi-elected president is performing overt ethnic cleansing, killing thousands of people, and these things should be morally OK? Have you lost the last traces of your decency? Have you lost your mind? They're really doing exactly the same thing against their citizens of a different nationality that Saddam Hussein was doing against the Kurds, and so on. Even the number of the casualties has become comparable.

Certain people in the West are creating an immense amount of mess and they never seem to be punished for that. It's enough if they make their stupid aß-licking media repeat even more preposterous excuses than they did last time and their skin is saved. I hope that they – or at least their puppets in Kiev – will be punished (in the case of the Kiev government, I probably mean "killed") so that the deterioration of the Western society is at least slowed down a little bit. So even though the economy and the assets of people like me suffer, I do hope that Russia et al. will actually enter Ukraine soon and truncate the sky-reaching arrogance of the people who are currently trying to force the whole Ukrainian society into obedience. And I don't mean those 10 soldiers who got lost. I don't even mean the 1,000 soldiers on vacations whose presence in Ukraine was called "invasion" yesterday. I mean a real invasion. Despite the Kremlin's immensely calm behavior, I am pretty sure that most of the Russian citizens want the real invasion of Ukraine to being as soon as possible and I am with them.

So far, unlike Russia that isn't doing anything to escalate the situation, some Eastern European countries whose main pride is all about their hatred towards the Russian do childish things to escalate the situation on a daily basis. The Kiev parliament penned a bill to apply for NATO membership – almost certainly a red line for Russia. Meanwhile, Poland blocked its airspace for the Russian defense minister who just wanted to return from Slovakia (where he attended the celebrations of the anniversary of the 1944 Slovak National Uprising against the clerofascist regime) to his home. He had to land in Bratislava again. One can't assume that the Poles would behave rationally, as adults. Ukraine quickly closed its airspace for the minister, too. In the case of Ukraine, I won't even discuss whether they're mature because it's a waste of time. If it weren't enough for one day, Britain proposed to prevent the SWIFT global payment system from doing business with Russia and to stop the import of caviar and diamonds from Russia.

P.S.: I had to blacklist about 7 new fascist bullies who were trying to dictate me what I can watch, what I can think, and what I can write. As I have stressed many times, this intimidating behavior is well beyond my red line and won't be tolerated.

P.P.S.: By the evening, the anti-Kiev militias have claimed that they have shot 4 extra SU-25 planes that were on a mission to kill them. Last month, the Kiev airforce had 36 SU-25 planes – and over 100 planes in total – so a few similarly successful weeks could basically eliminate the Ukrainian airforce. Also, the militias have seized 14 T-64 tanks, 25 infantry fighting vehicles, 18 armored personnel carriers, one armored reconnaissance and patrol vehicle, one Uragan multiple launch rocket system, two Gvozdika self-propelled artillery guns, four D-30 howitzers, four mortars, one ZU-23-2 air defense system and 33 vehicles. just in the week of August 16-23. They really do not need any big inflows from Russia or elsewhere at this point. Unfortunately, the only way to stop the misunderstanding of some Western Ukraine warmongers that they are facing just a group of terrorists – rather than something like 1/2 of a nation – is to kill them.

I hope that the militias will take Mariupol in coming days. This city of almost 500,000 million dwellers was established by the Cossacks – if you don't know, the main job of the Cossacks was to defend the Russian Empire. It would be really crazy if the city were supposed to change to an anti-Russia base. I don't think that the Russian speakers around that place will allow such a thing. See how proud the anti-Kiev warriors are about their recent advances; that page is a high-quality expert war front reporting, I would say.
Luboš Motl v 4:28 PM
Share