My nearly velvet divorce with Bank of America

Off-topic: If you want to make one click with a bigger impact, you may boost a user (me) above the reputation level of 100,000 literally by one click unless you're late. ;-)


Except for a dramatic event, it was smooth

A Czech proverb due to the Daddy President of Czechoslovakia T.G. Masaryk teaches us that as many U.S. banks have served you, as many times you are a human being. Well, the original version was counting languages you can speak but that's so stupid that I wouldn't reproduce it on this blog. ;-) 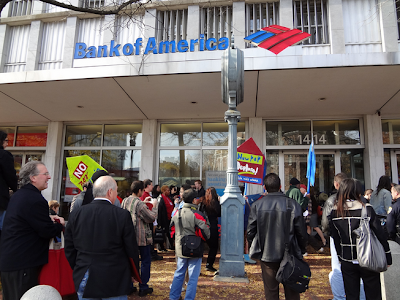 Bank of America on Harvard Square (technically on 1414 Mass Ave). By a not so unlikely coincidence, the picture also shows something that is so common in Cambridge, MA that it's a waste of time to comment on it. Hardcore left-wing whackadoodles, in this case a "City Life Vida Urbana" group, protests against greedy investors in front of a symbol of capitalism. Idiots like that are everywhere around the Harvard campus but one must walk for several miles – and indeed, I had to walk for several miles pretty much every day – to get to the nearest McDonald's.

Well, even though I have only opened accounts in 2 banks, I have been a quintuple human being. It's because my decade-long stay in the U.S. may be viewed as a history book of the U.S. banking industry. In New Brunswick, NJ, I would open an account in CoreStates (in 1997) but that would be eaten by First Union and later by Wachowia Bank. My branch of the Fleet bank at Harvard Square, Massachusetts became Bank of America in 2005.

Even though I haven't been to the States since July 2007, I was keeping the account open over there. A few dollars (or dozens of dollars) per month would be flowing there from Amazon Associates. And I found the account convenient when I had to pay some extra taxes after an evil left-wing junta – that would later hijack much of the Massachusetts and U.S. federal government – audited two of my tax returns.


The debit card I used to withdraw my money through Czech ATM machines would expire at the end of July 2014. The employees would promise me, via the online message center, that I could be sent a new one to my Czech postal address. But the new card sent in May 2014 didn't arrive for a month. I alerted them and they disabled it. Common sense.


I could still use my existing card to withdraw the money; at least I thought that I could. So I went to pick some $200 sometime in June 2014. And what happened what completely unexpected for me. The ATM machine devoured my card, said "invalid transaction", and just didn't want to return the card. I called a telephone number shown on the ATM machine and they assured me that it was indeed physically possible for the ATM machine to devour cards. Before that telephone call, I believed that such an absorption of a debit card contradicted the mass conservation law. ;-)

Needless to say, it looks completely clear to me today. They blocked the number of the lost debit card and because my existing debit card had the same 16-digit number, it had been blocked, too. All blocked cards are automatically devoured by ATM machines. All of it sounds obvious to me but it wasn't obvious then.

With the last card, I lost my only fast and realistic tool to deal with the money in the bank. The second replacement card didn't arrive, either. They probably aren't able to write functional Czech postal addresses on the envelopes. It's likely that BoA has never sent a single replacement VISA card to a Czech address. The words "Czech Republic" have probably been missing on the actual envelopes, as some e-mails (with an extra U.S. zip code, 00000-0000, indicated). Or "EU" or "Europe" was missing and it's needed in each country where the knowledge of geography is modest enough for most people to confuse Czechia with Chechnya.

At any rate, it became clear to me that the new card couldn't be delivered in this way. So someone (famous) in Cambridge, MA kindly offered me to pick the new card and send it by FedEx – which is what I actually did with the previous card given to me in late 2007 (thanks to a Harvard secretary, now retired). But finally I decided that it was not infinitely difficult to deposit the U.S. cheques in Czechia.

Today, after 26 days (19 days after the money got subtracted from BoA), the money finally arrived to my Czech bank. It could have been faster but according to the ČSOB rules, it could have been slower (they scare you that the transfer of the cheques may take as many as 70 days). Some banks could force the clients to pay the monthly fees and prevent them from closing the accounts. But today, I called Bank of America, 1-800-432-1000, via Skype, for free. It's cool and the quality of the call was excellent. I could easily type all the numbers it wanted from me – and even pretend that I can speak some English ("close my account"). The computer was co-operative. The "closure department" was repeatedly closed, even in business hours :-), but I was able to say "freeze my account" and get a real woman – I mean a woman on the line. She was pleasant (perhaps partly because the call was recorded) and things just went fine.

The Heavy Pokondr (Parody) Band (two radio hosts who are not really professional musicians but they almost could be): "My Darling, Come to Skype" (orig: Unique II – Break My Stride) complains about huge phone bills after he's told that the invoice shows the correct expenses. He finally manages to switch to Skype so now he and his sweetheart may be... really long. Reverse automatic translation of lyrics

She told me that they still have to send me the $1.64 cheque over here. It will probably not arrive, assuming that the envelopes are completed by the same department that also sends the debit cards. But if it happens to arrive, I assured the woman that with her kind permission, I would use the cheque as toilet paper because the fees to deposit a U.S. cheque in Europe are clearly higher than $1.64 (at least $15) so the cheque is worthless.

Now, within hours, the online banking already says that there are no open accounts associated with the username and password, so I think that the mission has been accomplished. (The Amazon Associates fees are being sent to me as Amazon gifts. So if you want to buy something via Amazon with a 5% discount, let me know.) This minor episode ended with a happy end but I admit that when I was de facto a criminal who uses a reported stolen/lost debit card, I was close to šitting into my pants.

My overall experience with Bank of America has been good. Well, yes, there are many corporations that I like. God bless corporations.
Luboš Motl v 6:26 PM
Share