Last time when I talked about the Sleeping Beauty Problem a week ago, I wanted to convey two points.

One of them – the woman's visit to Guantanámo Bay – was that the belief in \(P=1/3\) is equivalent to a major flaw in thinking that turns many people into conspiracy theorists: they think that even if some scenario is very unlikely (e.g. that the woman is transferred to the facility in Cuba), the low value of the probability may be "beaten" and made irrelevant by inventing "huge implications" such as a very long sequence of torture and interviews.

But it isn't the case. If the probability of her transfer to Cuba is just \(1/5,000\) per week, the 50,000 interviews on Wednesday only share the tiny probability that she's transferred to Cuba in the first place. They can't be added up because they're not mutually exclusive. The message is that if some evolution is insanely unlikely so that it happens much less frequently than once per the lifetime of the Universe, you may just assume that this event is impossible regardless of the potentially huge hypothesized consequences of the unlikely scenario.

Another yet related point I wanted to make is that the Bayesian inference implies \(P_{\rm tails}=1/2\) if you do it right even if you include the "hypotheses about your state" among the competing hypotheses. "Doing it right" involves realizing that "Monday heads" and "Tuesday heads" aren't really mutually exclusive possibilities. You may have been confused why I divided some probabilities by two at some point but I think that Bob Walters (see also his bonus text), with some help from Nicoletta Sabadini, makes all these points clearer than I did.


First, he enumerates a couple of people at very famous places who give the invalid \(P_{\rm tails}=1/3\) answer to the elementary Sleeping Beauty Problem. He says that when she wakes up, she is getting no nontrivial information that would reduce or increase the odds of "heads" or "tails" – because both hypotheses imply that she would be woken up at least once, and that's the only thing she is observing. Because she is learning nothing new, her subjective probabilities of "heads" and "tails" have to be the same as they were on Sunday, namely \(1/2\) and \(1/2\).


But he also has a nice new discussion of the "probabilities of different states" using the machinery of the Markov chains. 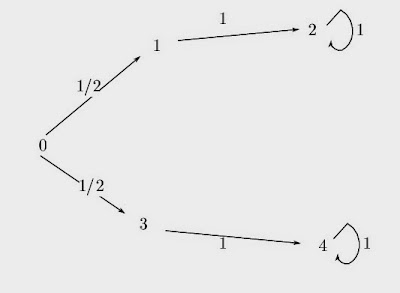 What Walters identifies as the key mistake in the thirders' reasoning is that they don't appreciate the following fact:


In a Markov process, we may only talk about the probabilities of transitions and we must specify the number of steps, he points out. This refinement has two points that I am going to discuss in more detail.

(Walters also says that the initial state and the number of steps may become irrelevant after a process of thermalization when the ergodic theorem implies that the "probabilities of a state at a random moment" may be identified with a "probability distribution on the phase space". But without this identification i.e. without thermalization, the notion of a "probability at an unspecified moment" isn't well-defined.)

First, the probabilities in a Markov process have to specify the whole transitions, including the initial state. There's nothing such as a "probability of a final state" without specifying any information about the initial state. It's sort of obvious – one can't derive any probabilities if he isn't told anything – but the necessity to have some initial specified state is the kind of insight that the likes of Carroll love to overlook because they hate the idea of a beginning of a process in Nature (especially a low-entropy beginning of the evolution of any physical system, whether it's the Universe or anything else).

But in the case of the Sleeping Beauty Problem, the need to specify the initial state \(x\) doesn't really make a difference because everyone knows that we may assume that the \(x=\)"Sunday" with the coin toss is the initial state so it doesn't hurt when we assume this initial state.

Second, more importantly, the probabilities in the context of a Markov chain have to specify the "time" which, in this case, means the number \(n\) of steps that the evolution from \(x\) to \(y\) takes. The probabilities for different values of \(n\) have to be treated separately. Why? Walters wrote the explanation remarkably clearly so that, I believe, it should erase all your doubts.

\] because after \(n\) steps, the system has inevitably reached one of the allowed states \(y\). However, the thirders' fallacy is to treat the transitions \(x\to y\) with different values of \(n\) as mutually excluding, so they effectively assume\[

\] However, this assumption of "mutual exclusiveness" of the evolutions – in our case, the mutual exclusiveness of "Monday tails", "Monday heads", "Tuesday heads" – is clearly wrong. We may calculate the right value of the sum above and this sum is clearly greater than one. Well, the summand is equal to \(1\) for each value of \(n\) – after \(n\) steps, one is guaranteed to get somewhere – so the "total probability" envisioned by the thirders is equal to \(D_{\max}\), the maximum allowed number of steps (or days). It may even be infinite. But for a set of options to be considered mutually exclusive, the sum of probabilities has to be one!

\] Both terms on the right hand side are equal to \(1/2\) because we know that the coin must end up "heads". You see that the sum of these two probabilities – and the thirders had to use the sum because they incorrectly assumed "Monday heads" and "Tuesday heads" to be mutually exclusive – is already \(2\times 1/2 = 1\), so it should mean that there is a certainty that one gets heads. For the evolution to "Monday tails" (in one step), there is only one term that is again equal to \(1/2\). That's twice smaller than the sum \(P=1\) we got for "heads" which is why thirders ultimately incorrectly assign the probability \(P_{\rm tails}=1/3\) to the "tails" and the remaining \(P_{\rm heads}=2/3\) to the "heads".

However, you see that the intermediate results giving this answer really involve the assumption that the evolution from "Sunday" to "any heads" is equal to one – although there's surely no certainty that you get "heads". This is obviously a manifestation of the fact that their probabilities do not sum to one. Their sum exceeds one.

\] The actual sum over both \(n\) and the final states \(y\) is actually greater than one. Is there a way to assign probabilities to different states in the Markov chain, assuming an initial \(x\), in a way that pays no attention to \(n\)?

Yes, there is, but we are not allowed to sum over all values of \(n\), the number of steps, because this sum yields the "total probability" for all options to be greater than one, as we have repeatedly said. Instead, the right ways to calculate \(n\)-blind probabilities of different states is to compute a weighted average of the probabilities assuming a certain value of \(n\). The weights aren't determined in general but if there is no difference between the "Monday heads" and "Tuesday heads" interviews, we may choose the weights to be equal to each other i.e. equal to \(1/2\). It means that the thirders' wrong equation\[

You may see that the probabilities of \(A\) "or" \(B\) are sometimes the sums and sometimes the (weighted) averages. This is very analogous to (and in fact, a special case of) the point made in many blog posts about the second law of thermodynamics: probabilities for the evolution of "one ensemble" to "another ensemble" are summed over final microstates but averaged over the initial microstates. Because \(n\), the number of steps in a Markov chain that have led to the present state, is a part of the information about the past, it follows the rules of the past so we must average over different values of \(n\) and not sum! More generally, thirders are the people who would always like to sum probabilities and interpret the sum as a probability – while not caring whether the sum exceeds one.

If you use Bob Walters' perspective, you may see that the thirders implicitly assume that the sum of probabilities of all mutually exclusive options is greater than one (e.g. two). That's quite an egregious error, indeed. It's an error leading (or at least helping to lead) various people to say lots of dumb things about "problems with the second law of thermodynamics", "many worlds of quantum mechanics", "anthropic principle", or – in the case of the most unhinged whackadoodles – "Boltzmann Brains".
Luboš Motl v 11:11 AM
Share