B.A. is a professor of theoretical physics at the University of Cambridge. He is a supersymmetry enthusiast, and is always looking for ways to interpret data using it. You can watch his TEDx talk giving some background to the LHC, supersymmetry and dark matter, or (for experts) look at the paper that this blog refers to.


“Ambulance chasing” refers to the morally dubious practice of lawyers chasing down accident victims in order to help them sue. In a physics context, when some recent data disagrees with the Standard Model of particle physics and researchers come up with an interpretation in terms of new physics, they are called ambulance chasers too. This is probably because some view the practice as a little glory-grabbing and somehow impure: you’re not solving problems purely using your mind (you’re using data as well), and even worse that that, you’ve had to be quick or other researchers might have been able produce something similar before you. It’s not that the complainers get really upset, more that they can be a bit sniffy (and others are just taking the piss in a fun way). I’ve been ambulance chasing some data just recently with collaborators, and we’ve been having a great time. These projects are short, snappy and intense. You work long hours for a short period, playing ping-pong with the draft in the final stages while you quickly write the work up as a short scientific paper.

A couple of weeks ago, the CMS experiment released an analysis of some data (TRF) that piqued our interest because it had a small disagreement with Standard Model predictions. In order to look for interesting effects, CMS sieved the data in the following way: they required either an electron and an anti-electron or a muon and an anti-muon. Electrons and muons are called `leptons’ collectively. They also required two jets (sprays of strongly interacting particles) and some apparent missing energy. We’ve known for years that maybe you could find supersymmetry with this kind of sieving. The jets and leptons could come from the production of supersymmetric particles which decay into them and a supersymmetric dark matter particle. So if you find too many of these type of collisions compared to Standard Model predictions, it could be due to supersymmetric particle production.


The ‘missing energy’ under the supersymmetry hypothesis would be due to a supersymmetric dark matter particle that does not interact with the detector, and steals off momentum and energy from the collision. Some ordinary Standard Model type physics can produce collisions that pass through the sieve: for example top, anti-top production. But top anti-top production will give electron anti-muon production with the same probability as electron anti-electron production. So, to account for the dominant background (i.e. ordinary collisions that we are less interested in but that get through the sieve still), the experiment does something clever: they subtract off the electron anti-muon collisions from the electron anti-electron collisions.


The picture below shows the number of collisions that passed through the sieve depending upon the invariant mass of the lepton pair. The big peak is expected and is due to production of a Z-boson. But toward the left-hand side of the plot, you can see that there are a few too many observed events with low invariant masses, compared to the “background” prediction. We’ve interpreted this excess with our supersymmetric particle production hypothesis. 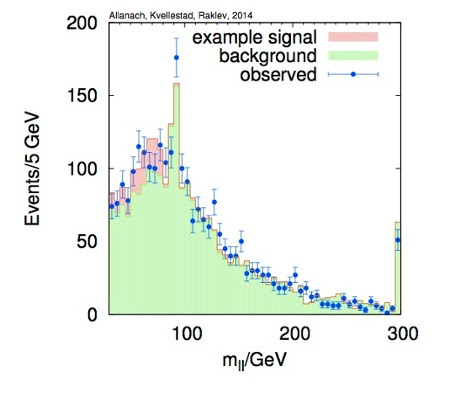 Plot of the dilepton mass distribution from CMS

For those in the know, this is a “2.6 sigma” discrepancy in the rate of production of the type of collisions that CMS had sieved. The number of sigma tells you how unlikely the data is to have come from your model (in this case, the Standard Model). The greater the number of sigma, the more unlikely. 2.6 sigma means that, if you had performed a hundred LHC experiments with identical conditions, the measurement would only have such a large discrepancy once, on average, assuming that the Standard Model is the correct theory of nature. At this point, it’s easy to make it sound like the signal is definitely a discovery. The trouble is, though, that the experiments look at hundreds upon hundreds of measurements, so some of them will come up as discrepant as 2.6 sigma and of course those are the ones you notice. So no one can claim that this is a discovery. Perhaps it will just disappear in new data, because it was one of those chance fluctuations (we’ve seen several like this disappear before). But perhaps it will stick around and get stronger, and that’s the possibility that we are excited about.

When you do this kind of project, the first thing is to check and see if your hypothesis is ruled out by other data, in which case it’s dead in the water before it can get swimming. After that, the question is: does your hypothesis make any other predictions that can be tested? For instance, we’ve been suggesting how the experiment can take another look at their own data to check our hypothesis (there should also be an obvious excess in the events if you plot them against another variable: `jet di-lepton invariant mass’). And we’ve been making predictions of our hypothesis for the prospects of detecting supersymmetry in Run II next year.

You can be sniffy about our kind of ambulance chasing for a variety of reasons - one of them is that it might be a waste of time because it’s “only a 2.6 sigma effect”. There is an obvious response to this: it’s better to work on a 2.6 sigma signal than a 0.0 sigma one.
Luboš Motl v 1:03 PM
Share