Antarctica is a climate denier, too

These days, the climate alarmist media are full of tirades against the penguins. 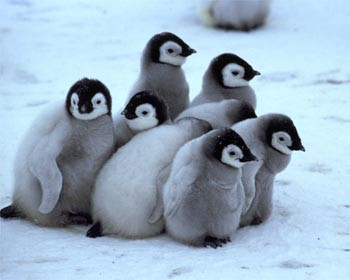 Children should only be allowed to play with the polar bears and not the penguins, we often read, because penguins are evil conservatives, anti-Gore and anti-Stalinist mavericks and contrarians paid by the Koch brothers and the dirty Big Oil. Why did the climate alarmist whackos begin to hate these cute animals (and even erase Linux from their hard disks and stop rooting for the ice-hockey team in Pittsburgh)?

If you open the Cryosphere Today and especially a graph of the absolute Southern Hemisphere sea ice area, a graph from the places where the penguins live, you will see that these days, the sea ice area is surpassing the all-time record high. Well, "all-time" only means the recent 35 years but this period of time is still longer than most people's memory.

It's apparently politically incorrect for ice to accumulate and to say "f*ck you, you f*cked up alarmist aßes". A well-behaved ice with civil awareness should melt away and scream "help to save the planet and introduce a new tax and new bans!".


The winter is just ending on the Southern Hemisphere and it's the season when the sea ice area typically reaches its maximum value in the year.

The Southern Hemisphere sea ice area surpassed 16.7 million squared kilometers these days, beating the previous all-time record below 16.5 million squared kilometers. Relatively to the annual maximum 5 years ago, the increase is 10%, so you may use the IPCC methods – exactly the same methods that they are using for the Arctic – to conclude that the oceans around the Antarctica had to be ice-free for the whole year 50 years ago! ;-)


There are tons of stories about the new record high and virtually all stories written in the English language mention the "global warming" teaching for the retarded citizens. It's deeply embarrassing for the whole Anglo-Saxon world. You find titles like


Oh, really? Global temperatures are rising? The Cryosphere Today graph is only available in the "satellite era" from the late 1970s. It's just 35 years long. Because the trend of the global mean temperature has been tiny and negative in the last 18 years and 18 is more than one-half of 35, you may notice that the global temperature wasn't rising in most of the satellite record.

The confrontation about the "global warming" propaganda is often reduced to the problem of attribution. Who has caused the global warming? People are often told that all the experts must agree about the very existence of something that could be called "global warming". The reality is that there's been no positive trend in the global mean temperature for 18 years – it's a longer time than the age of some of the TRF readers – so there is nothing to attribute. But the climate change psychopaths continue to talk about the "global warming" as if it were taking place every year, all the time, and use this wrong assumption as the cause of their additional speculations or excuses.

Global warming couldn't have caused anything in the 2nd half of the satellite record of the Antarctic sea ice simply because this global warming didn't exist.

Some climate change cranks are more psychopathological than others. For example, Nude Socialist flatly informs us that


Record sea ice around Antarctica due to global warming.


Wow. These imbeciles not only fail to see the discrepancy – melting of both polar caps was predicted pretty much in all the climate hysterical literature – and they fail to exploit the opportunity to fix some of the most self-evident delusions and abandon some of the most clearly falsified theories. They have the arrogance to use this observation as an argument for their delusions.

There are lots of detailed differences between the Arctic and the Antarctica. There is an ocean in the former region but a continent in the latter region. This difference has many additional consequences. The Antarctica is more "isolated" from the global dynamics, and so on. However, there simply exists no coherent theory that would allow one to use the advancing ice in the Southern Hemisphere to strengthen the case for the climate panic.


The increase in southern ice was linked to intensified wind pace and increased fresh water from land ice in Antarctica.


But this is just a random excuse. Such "simple explanations" which can only be said a posteriori – but can never used to actually predict anything – are similar to many articles about the stock market. You know, the stock market went up yesterday, or went down, so some of the financial outlets write articles like


Stocks up [down] as [despite] (something happened)

From the policy viewpoint, what's more important than the existence of a well-defined cause is that we can't predict it – we may only invent these excuses after we are told what actually happened. For this reason, we also can't predict things like whether the Antarctic or Arctic ice in 2050 will show higher or lower areas than today. A crook may invent lots of excuses and say that the dynamics always confirms his or her previous proclamations but only a gullible moron will fail to notice that the crook is cheating and there is really no predictive substance.

So please, let the ice on both hemispheres do whatever it wants to do or is destined to do and stop politicizing this dynamics. Neither the increase nor the decrease of the Arctic or Antarctic ice is a justification for the introduction of new taxes or new bans and everyone who tries to claim something else and get power or money along the way should spend her life in prison.


Autumn only starts on September 23rd (at 04:29 Pilsner Summer Time) but the season is already coming:

The most beautiful season is apparently the autumn
when my sweetheart is shoveling the leaves.
I think that what's she's doing is certainly right:
the garden gets cleaner when it is shoveled regularly.

The most beautiful season is apparently the autumn
when she is planting the rhododendrons.
But it's so cool
when she throws soil behind her back
as an experienced mole.

The most beautiful season is apparently the autumn
when I see my love
as she is fertilizing a seedbed of chives by the Thomas Powder [a phosphate fertilizer with mangan, boron etc. obtained from ore processing] from a large bag.

The most beautiful season is apparently the autumn
when I, sitting on the doorstep, am holding my sweetheart's thumbs.
But my thumbs are already painful
so I will go somewhere where will pour something for me.
I will probably spend some time over there, my darling.
Luboš Motl v 4:27 PM
Share