Higgs the mass killer: in defense of Stephen Hawking

Stephen Hawking was brought to deep financial troubles when he lost $100 against TRF guest blogger Gordon Kane after the two men have agreed on a bet that the Higgs boson would or wouldn't ever be discovered, or something like that. (I have won $500 for an analogous bet: yes, the Higgs boson has been discovered.) So evil tongues could argue that it's the reason why Hawking says that Higgs has made physics less interesting – and now why he accuses the Higgs particle of the plan to destroy the world.

Will it destroy the world?

Probably not but the threat, while small, has a totally legitimate scientific justification.

Yahoo News were among the tons of sources that have offered the disturbing prophesy by the famous physicist. Matt Strassler and especially Don Lincoln (full) wrote nice texts that try to calm the public and present Hawking's warnings as scientifically misleading.

I wouldn't be equally critical.


Now, Strassler and Lincoln are right about all or pretty much all technical issues. So it is not a single Higgs boson that would create the doom but the Higgs field. (Although, particular processes may catalyze the decay-of-the-vacuum instantons, so I wouldn't say that the rate of the doom is completely independent of the particles that are produced within the Universe.)


The recently measured mass of the Higgs boson near \(125\GeV\) is above the masses for which the Standard Model would predict a full-fledged instability. But this value of the mass is below the masses for which the Higgs field remains completely stable even at Planckian temperatures. It is somewhere in between – the Standard Model Higgs field is "metastable". 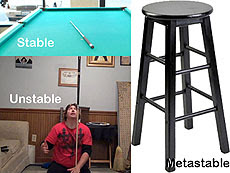 This picture of Don Lincoln seems nice enough to explain the difference between "stability", "metastability", and "instability". A stable configuration doesn't have a way to seriously lower the energy relatively to what seems as the "ground state" we start with. The ground state corresponds to the "global minimum" of the energy. An unstable configuration allows such a lowering – it's enough to change some "coordinate" \(x\) by an infinitesimal amount. Because there is a contribution to the potential energy going like \(-x^2\), the point \(x=0\) is stationary (the derivative i.e. the force is zero over there) but \(x=\varepsilon\) is preferred because the stationary point is a maximum, not a minimum, with respect to variations in that direction. A small perturbation will drive \(x\) to \(x=\varepsilon\) where the force is no longer zero and in fact drives \(x\) to exponentially grow in time (the exponential growth or a sinh/cosh is the opposite-sign counterpart of the oscillating sines we know from the harmonic oscillator whose potential energy goes like \(+x^2\)).

A metastable configuration, and that's what the Higgs field would occupy if the Higgs mass were \(125\GeV\) (it almost certainly is) and if the Standard Model were the whole story (it probably isn't), is one where the energy of the "ground state" we want to occupy is at a "local minimum". Small variations of the angle of the stool raise the energy so the stool doesn't want to fall. However, if you help the stool to overcome a barrier, it will be able to "repay" the invested energy including some interests. When the stool falls completely, it will have a lower energy, after all.

The metastable Higgs field is analogous. Small changes of the Higgs field seem to increase the energy so they are disfavored. But if the Higgs field were able to change by a significant amount, it would find out that there is a "better" (lower-energy) place for the Higgs field to live. However, this place kills everything in the Universe because the effective laws of physics would be completely different over there.

Classically, the metastable points (local minima of energy) behave just like the global ones. The stool will stand forever. Quantum mechanically, we must always deal with the tunneling effect. The stool is able to spontaneously fall because it has a nonzero probability to overcome the energy barrier that is classically impenetrable.

If the Standard Model were the whole story, we might calculate the exponential that determines the small probability of the Higgs tunneling, and it would imply that the lifetime of the Universe would be at least equal to a trillion of years, and possibly larger. The Sun will go red giant in 7.5 billion years so the "Higgs decay of the Universe" is 100+ times less urgent according to the Standard Model.

But there may be extra physics which either cures similar instabilities – and even metastabilities that are replaced by stable configurations; supersymmetry is the most motivated theory that achieves so. However, new physics may also make things worse. There may be new scalar (Higgs-like) fields that imply a metastable threat, perhaps a much more urgent one than the Standard Model trillion-year threat.

I think that this is a cool piece of physics that was pioneered primarily by Sidney Coleman, an ultimate physicists' physicist, and even from the viewpoint of the media, these results are sort of fascinating and heavily underreported. Physical theories in which the Universe gets destroyed entirely are completely allowed. At a random place and random time (with a calculable probability per unit volume and unit time), a "seed of doom" may be born ("nucleated") and it may expand pretty much by the speed of light and destroy everything it hits.

The tiny probability of such a nucleation determines the lifetime of the original Universe, if it is finite at all. The lifetime is pretty much an exponential and the exponent is a huge number. That's why lifetimes as long as \(10^{100}\) years and even \(\exp(10^{100})\) years may occur in calculations. Due to the possibility to get such high numbers and thanks to the fact that low numbers are not really allowed because the Universe is still around, we may say that the lifetimes comparable to 10 billion years seem rather unlikely.

But they can't really be excluded.

There may be a metastable scalar field in the Universe that destroys the Universe roughly after 10 billion years.

If the typical lifetime were much shorter than 10 billion years, the probability that we would still be here would be dropping exponentially (the exponent is –13.8 billion years over the predicted lifetime, roughly speaking), and this quickly decreasing tiny exponential would also encode the probability that such a hypothesis is right. The existence of an instability with a lifetime shorter than 1 billion years is surely excluded at more than 5 sigma level.

On the other hand, if we imagine that there is a metastable field that implies a decay of the Universe with the lifetime between 10 and 20 billion years, for example, which is reasonably compatible with the fact that we haven't died yet, then it is an important threat, indeed.

Over the next 7.5 billion years, we will see approximately one extermination of life on Earth due to the Sun that runs out of fuel and becomes the red giant. The metastable field from the previous paragraph would add one more threat – one extinction per 10 billion years – that is equally fast, likely, or urgent. And it is unpredictable. So while the trouble with the Sun's fuel is extremely unlikely to kill us in the next 1 billion years, the "decay of the Universe" would have a significant risk of 10 percent to kill us already in the next 1 billion years. The death is random and the probability of the universal death is proportional to the time.

Let me calm you down: if the Universe is ever destroyed in this way, you won't feel anything because the "doom" or "nothingness" spreads almost exactly by the speed of light and faster than any signals in your nerves.

Is there a metastable field in Nature that would imply an instability giving the Universe the lifetime of just tens of billions of years? Probably not. The theories with such an instability are slightly tuned. But the probability could be 1% according to what we know. I think that even with this probability, it's fair to say that a metastable scalar field is still much more likely to "completely eradicate the life on Earth" than a CO2-induced climate change, for example. The former is reasonably possible – the probabilities are given by a power law with a reasonable probability. The latter is not possible – the probability that a clearly minor effect of CO2 destroys everything is a tunneling-effect-styled unlikely event whose probability is exponentially small (and therefore parametrically smaller).

So to a large extent, I believe that it is right for Stephen Hawking to popularize the "decay of the false vacuum" because it is a set of insights and methods in theoretical physics that are analogous to the cosmic inflation, for example, but they speak about the future, not the past, and they speak with a more anxious voice!

The previous article about the decay of the Universe was the June 2014 blog post combining the BICEP2 and Higgs results to a potential threat. Previously, I have discussed the Higgs instability many times on this blog, e.g. in


Don't be "really afraid" because the risks are tiny but be sure that such a cosmic catastrophe does follow from various totally sensible, professional theories of the cutting-edge physics (and they're even fully incorporated on models arising from string theory) and the predicted rates may be extremely long as well as relatively short so Hawking is surely not making everything up.
Luboš Motl v 9:10 AM
Share