"Pro-democratic" protests in Hong Kong continue to cause havoc in that province – and the global markets.

I find most of the chaos and the attention to these protesters incomprehensible. Apparently, they are protesting the planned non-democratic character of some 2017 elections (or perhaps I should say "appointments"). Some sources say that they just want to express sympathies with the protesters in Ferguson, too. ;-) These two explanations seem very different but no one is quite sure which of them is more accurate. 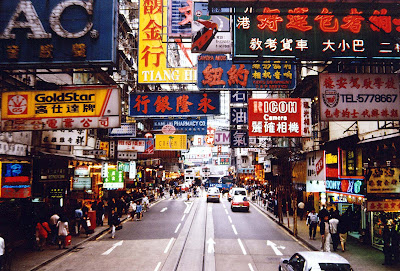 I couldn't learn how to walk on such a street, let alone how to learn the 3,000 Kung Fu characters. At least, when two Chinese Germans asked me how to get to a river in Ejpovice, I could teach them that here in Czechia, it's not a "livel" but a "rrrriverrrrrr". :-)

First, some basic background. I would isolate three "more capitalist provinces" of Greater China – places that we would know from the "MADE IN ***" on lots of electronics products since the 1980s. First, there is Singapore. 75% of its 5 million people are Chinese but Singapore is a tip of the Malay Peninsula (the peninsula consisting mostly of Malaysia and connected to the thicker peninsula of Indochina – with Vietnam, Thailand etc.). Singapore isn't "too close" to mainland China but it's heavily Chinese because China has used it for trade.


If you continue to the East, you encounter Hong Kong which is also a small peninsula of a sort, directly connected to mainland China. It's special because Britain used to use it as an important port in its (or British India's) trade with China and it won the place during one of the opium wars, or whatever it was. It remained a British colony for decades after the World War II. At the end, under various pressures, Maggie agreed to give it up at some moment in 1997. It was agreed that Hong Kong would remain partly independent within China for the next 50 years, under the "one country, two system" rule.


Just for the sake of completeness, if you continue to the East, there is Taiwan, an island very close to mainland China. It has 23 million people and represents the "true China" while the People's Republic or "mainland China" is the "fake China". While I would obviously be closer to the values of Taiwan, I say these things in this way because the similarity to a "tail wagging the dog" sounds comical to me. Taiwan is special because there was a civil war in China after the Second World War. The commies won almost everything while the pro-capitalists won the island of Taiwan so they still have a constitution that says that the rest of the territories (meaning the "mainland China" with over 1 billion people) will be annexed by the "true China" (Taiwan) in a foreseeable future. Nice.

Sometimes in the 1980s, when I was 10, my uncle, a mathematics professor in Melbourne, would visit Hong Kong and send a postcard saying that "they had to visit it before 1997 when the Chinese would take over and ruin the place". The logic seemed perfectly sensible but with the hindsight, one may say that the postcard – and most of us – failed to predict the actual evolution that would take place in the following 30 years.

The evolution was, of course, that the communist China would increasingly adopt capitalist policies in the economy (it was starting to do so in the 1980s when the reunification of Hong Kong with China was being decided) and it would become an increasingly prosperous and quickly growing economy – while its political system would still keep much of Mao's heritage. In the 1980s, we would see "MADE IN TAIWAN", "MADE IN SINGAPORE", "MADE IN HONG KONG" on our Commodore 64 computers and lots of other electronic products. These days, we increasingly see "MADE IN [mainland] CHINA". The capitalist provinces only host a tiny percentage of the Chinese nation so if you allow "at least some" market economy in the mainland China, it is guaranteed to overshine the three capitalist provinces.

In 1992, when we competed at the International Mathematical Olympiad in Moscow, we (or at least I) would interact with lots of people, like hot Russian babes who would host us, and so on. But I still remember my conversations with the contestants from Hong Kong. I asked them about the politics of their province and expected some unrestricted fear of the looming 1997 unification with China. Instead, all 6 of them were just looking forward to the unity within China.

Now, I don't know whether these young Hong Kong mathematicians had been politically filtered by a key that would only pick the friends of the People's Republic (by whom?) or what was going on. The simplest explanation is that they really represented the prevalent opinion in Hong Kong. And most likely, they still do. Needless to say, I could tell you about many similarly surprising pro-Chinese attitudes of the Taiwanese folks at Harvard etc.

So the lesson I draw from these conversations is that a very large majority of the ethnic Chinese really do prefer some kind of a unity of the Chinese nation, even if it means to adopt the political standards of the People's Republic. There are Chinese people who think "almost just like us", e.g. like the libertarians in the West, but they are very rare.

From some blood-based, emotional viewpoint, I find it natural. To mention another example, I would also find it extremely natural if Austria were allowed to reunify with Germany – although such efforts have been nearly non-existent after the war. But in the Chinese capitalist provinces, the support for the integration is almost certainly high.

There can be no doubt that if mainland China abolishes the democratic character of some elections or appointments in 2017, it is violating the agreement with the United Kingdom that was supposed to preserve a traditional, Britain-like political system through 2047 AD. However, it's hard to imagine how Britain – or someone else – is going to defend the rights of its "true allies" withing Hong Kong. Britain really doesn't care about Hong Kong too much anymore. When someone loses its control over a territory, his interest in the territory may really evaporate rather quickly.

I don't know what the protestors really want. I don't feel that what they want is really the preservation or restoration of a British system. They seem much more similar to the Occupy Wall Street movement, and perhaps to some of the not so intellectual deep protesters in Ferguson. Quite generally, I don't really have much empathy for the Chinese political thinking in general. Their appreciation for a paternal state is much older than the People's Republic of China – it really goes back 3,000 years. Maybe the thinking of a Chinese is more similar to the thinking of one cell of a human in the West than to the whole Western human – they just want to be a part of an insanely huge body, a gigaperson.

But if there is someone in Hong Kong who is protesting for reasons that many of us could understand in the West, I think that it's sensible to tell them that they can't win the fight against the rest of the Chinese nation that must clearly be OK with the political arrangement in mainland China, a system that inevitably affects Hong Kong as well these days. Maybe if they want to keep some features of the political system that may be called Anglo-Saxon or Western, they should better develop some activity that will convince the rest of the Chinese that it's the right way to go. They would enjoy my support.

If I stick to what I see, however, these protests seem rather pointless and confusing to me.
Luboš Motl v 2:00 PM
Share